In the novel Frankenstein, Mary Shelley creates an interest in human life but the interest in human life comes after death. Human life has lengthened due to the successes of scientists in the region of medical science. Extending human life became the goal of an scientist named Victor Frankenstein. Beyond wanting to extend life, he also desired to prevent future deaths of countless innocent people and to diminish the concept of death itself. Following Frankenstein, scientists at MIT began researching ways to advance life.

Don't use plagiarized sources. Get your custom essay on
“ Frankenstein: Novel Analysis ”
Get custom paper
NEW! smart matching with writer

After many years Frankenstein’s goals and ambitions of extending human life continue, as scientists conduct research on cloning and regenerating body parts to help mankind live longer. As an scientist, Victor knows his responsibility is to help mankind; however, if he is unable to discover something that will, at least his research should lay a base for other scientists. “My operations might be incessantly baffled, and at last my work be imperfect; yet, when I considered the improvement which every day takes place in science and mechanics, I was encouraged to hope my present attempts would at least lay the foundations of future successes” (P 43).

By that quote, the reader can see that Frankenstein’s desire to interfere with nature can not be blamed, because his job as a scientist is to guarantee the survival of humankind. His commitment and ambition should be praised as he explains that, “In other studies you go as far as others have gone before you, and there is nothing more to know, but in a scientific pursuit there is continual food for discovery and wonder” (P 62).

He understands there are many possibilities in the field of science and he knows all he has to do is experiment with those possibilities. If Frankenstein had not experimented in the 1800s, scientists would not have achieved as much as they have today in the areas of cloning and creating human body parts. To prove the importance of testing science to its limits, he boldly states, “yet with how many things are we upon the brink of becoming acquainted, if cowardice or carelessness did not restrain our inquiries” (P 65). The scientist within Frankenstein prompts him to create his monster, and does not see himself as playing God whereas Shelley portrays him as playing God. Shelley believed that science does help mankind in multiple ways but theres a line that many scientist cross and end up going too far.

She interprets this feeling towards science with Frankenstein by creating an driving force within him to help mankind conquer death and diseases. But when he finally reaches his goal of his efforts and sees his creature and its ugliness, he turns away from it and flees the monstrosity he created, “How can I describe my emotions at this catastrophe, or how delineate the wretch whom with such infinite pains and care I had endeavoured to form?” (P 72). From that moment on he tries to suppress the consequences of his experiments and wants to escape them by working in other sciences. Victor even withdraws from his friends and psychological changes are visible. Shelley seems not to condemn the act of creation but rather Frankenstein’s lack of willingness to accept the responsibility for his deeds. His creation only becomes a monster at the moment his creator deserts it. Thus Frankenstein warns of the careless use of science. On the other hand, scientists at MIT begun working with human tissue to create artificial human body parts for replacement therapy, where scientist carefully and thoroughly monitor the factors of this creation. “We can use this heart tissue and use it on a person who is having problems with his heart” states a researcher in an MIT documentary (The Science of IPS Cells). The quote emphasizes that although scientists seem to change the way of God creations, this benefits the human race by saving lives.

Frankenstein wants to stop people from dying, and after discovering the secret of life, he experiments, so someone else can be saved. Scientists today almost do the same thing as Frankenstein; they have found ways to extend life but if they fail at this, they retrace their steps and go through the process again to fix mistakes unlike Victor. In conclusion, Dr. Victor Frankenstein became a founder for the successes in medical science today. He should not be criticized for playing God and tampering with nature, instead he should be credited for experimenting to extend human life today. Without his experiments medical science would not be as advanced as it is now, and scientists would not have the challenge to start their research. Researchers at MIT know that Frankenstein is right in his ambition to advance human life, thus they and other scientists today continue to research in the field of life. Shelley successfully places herself in the mind of an scientist with the creation Frankenstein. 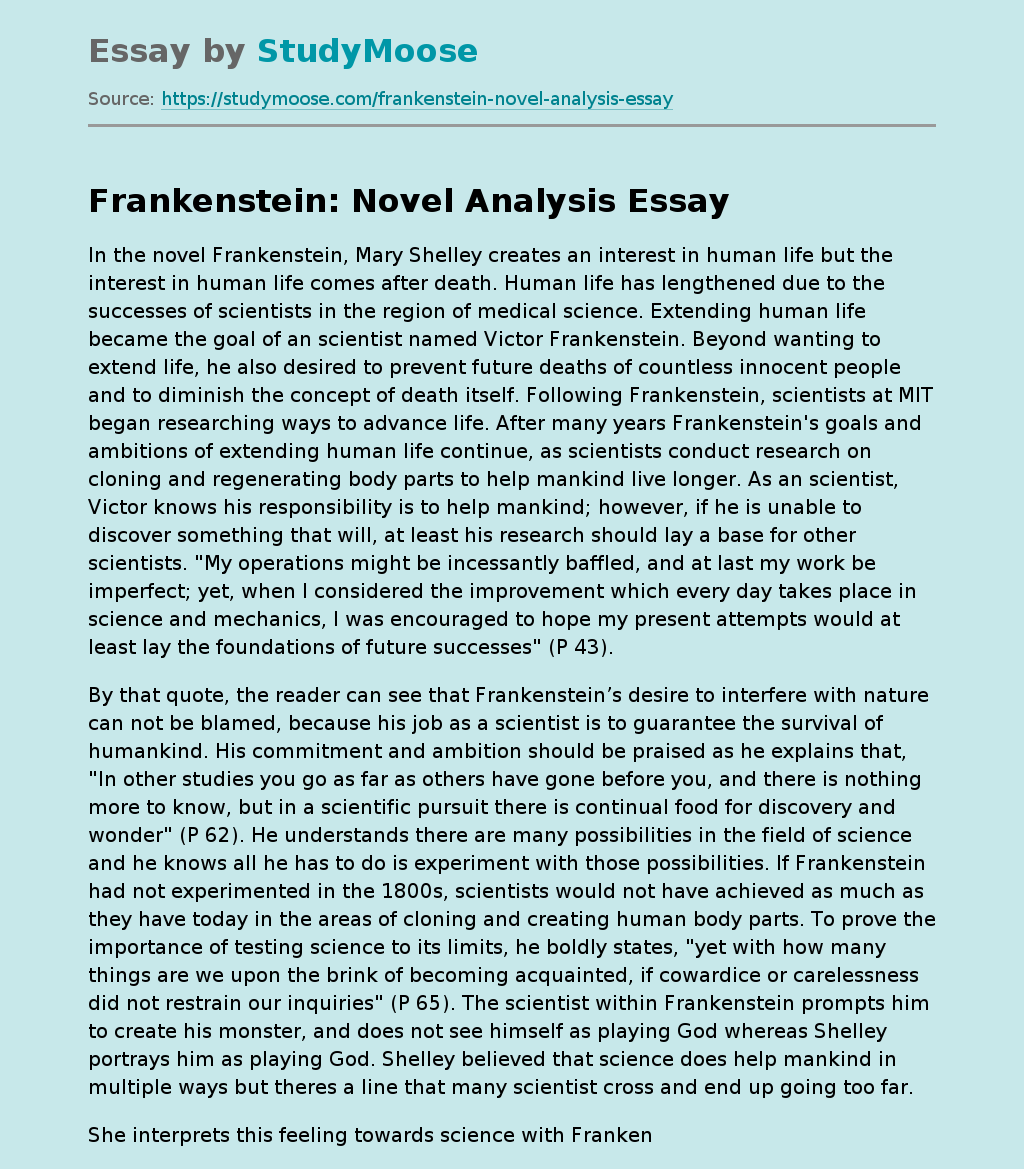