Bulacan was officially called “Bulacan Province”, is a first class province of the Republic of the Philippines located in the Central Luzon Region (Region 3) in the island of Luzon, North of Manila (the nation’s capital), and part of the Metro Luzon Urban Beltway Super Region. Bulacan pries itself for its rich historical heritage. Bulacan has fast become an ideal tourist destination, owing to its vital role in Philippine history, and its rich heritage in culture and the arts.

Don't use plagiarized sources. Get your custom essay on
“ Food and Street Foods ”
Get custom paper
NEW! smart matching with writer

It is also home to numerous resorts, hotels, restaurants, and other recreational facilities. (Wikipedia)

The briskness of Street foods in Bulacan can be measured by the long queue of consumers’ everyday in the food outlets in strategic places where street foods like: “lugaw” or Rice Porridge, goto, mami, fish balls, barbecued banana, salted peanuts and chicken pops.

(Toledo, 1988) Street Foods is a “Survival Meals”, maybe because it satisfies the gustatory sense for a temporary period of time. (Soledad Leynes, 1986) In such case, eating away from home due to the changes in occupation and activities created a demand for cooked meals and snacks at a cheaper and affordable price that are served quickly.

Dual career, parents and small families who really have no time to prepare their meals at home resort to street foods for convenience.

These people seem not to care for the food source whether it comes from the legitimate food merchants or from the informal sector, otherwise called black market. (Soledad Leynes, 1986) Street foods, whether snacks or meals are affordable and always available, which are very popular among the low income households to a large extent and increasingly a daily fare among the middle income groups.

Households with working mothers are afforded ready to eat meals without the burden of cooking at home. Street food caters to the needs of the urban poor population by making food readily available and at low cost. Thus, street food vending is a traditional activity which can be considered a coping mechanism of the urban poor. Street foods are ready-to-eat foods and beverages prepared and/or sold by vendors or hawkers especially in the streets and other similar places.

They represent a significant part of urban food consumption for millions of low-and-middle-income consumers, in urban areas on a daily basis. Street foods may be the least expensive and most accessible means of obtaining a nutritionally balanced meal outside the home for many low income people, provided that the consumer is informed and able to choose the proper combination of foods. (Food and Agriculture Organization of the United Nations).

The street food market plays a crucial role in developing nations in satisfying the food demands of the urban occupants. Street foods feed countless people daily with a large range of foods that are fairly cheap and quickly available (Latham, 1997). However there are substantial reports of health issue that have actually been related to these street foods(Muleta and Ashenafi (2001 ); Ashenafi (1995 ); El-Sherbeeny et al (1985 ); Abdussalam and Kaferstein, (1993 ); Mensah et al (2002) and Omemu and Aderoju (2008 ). Street foods are sources of nutrition for numerous low-income groups at budget friendly costs in big urban areas.Nevertheless, there are also several health hazards associated with them. These foods could be main lorry for transmission of severe and deadly diseases that might be harmful.

Contamination of these foods could result from pre or post cooking contamination from the food handlers. Street food vendors are often unlicensed, untrained in food safety, food hygiene and sanitation, and work under crude unsanitary conditions (FAO 1990). Muinde and Kuria (2005) in their study in Nairobi, Kenya found that over thirty-five percent of the vendors belonged to the age category of 20-25 years. Sixty percent of the vendors were male while 40% were female. Sixty-two percent of the vendors interviewed had primary education and below, 36.3% had secondary education while only 1.3% had college education. In our study we found women made up 66.67% of the vendors while males made up 33.33% who fell into the average age group of 31-40 years with mean age of 41.23 years. This is in contrast with their findings. In Accra the street food trade was conducted by children aged >10 years and by women aged. 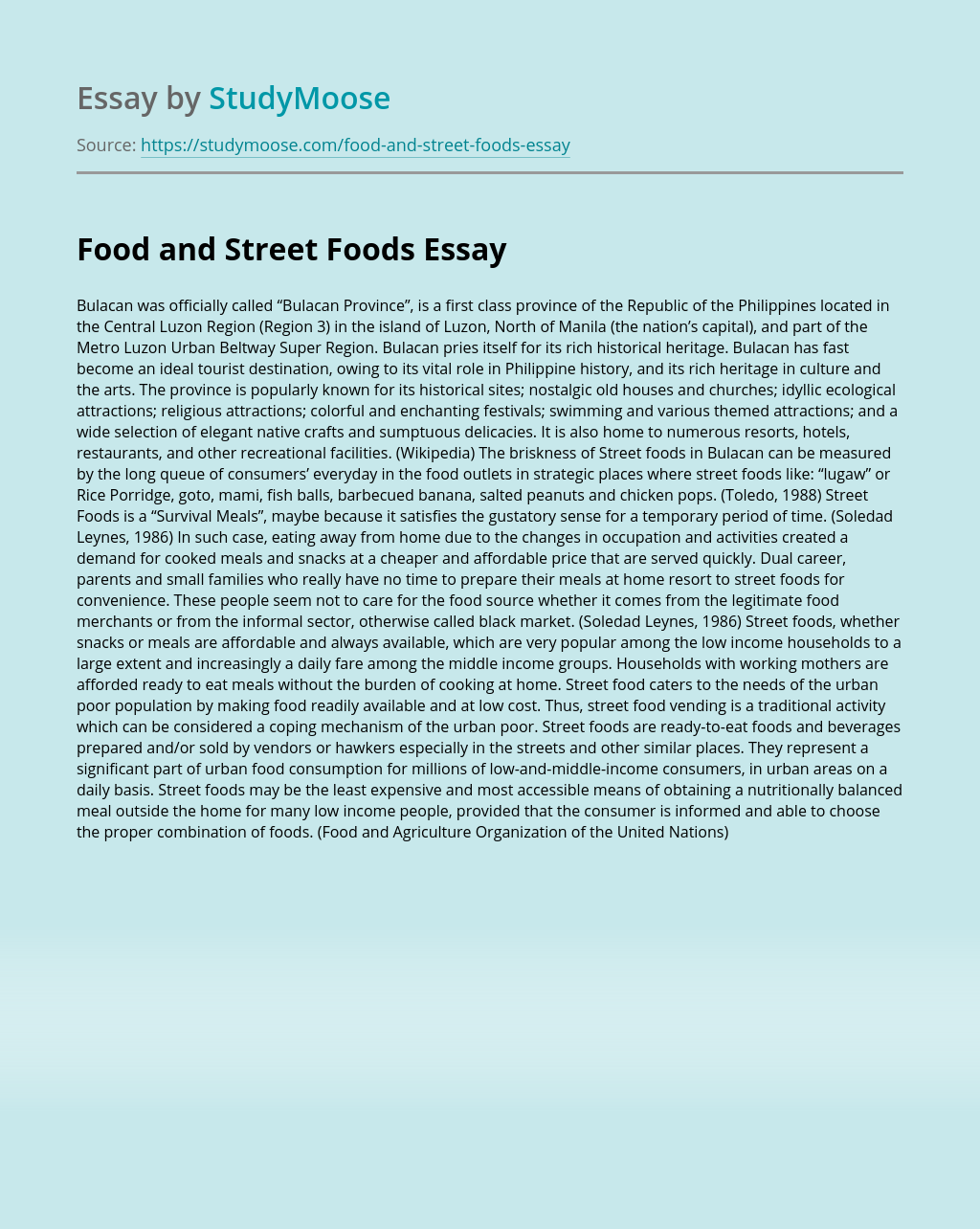