Beverage giant Coca-Cola wants to get a little love for its iconic cola drink from the upscale consumer set, so its decided to create and test-market a sleek set of contoured aluminum bottles for its flagship Coke brand. Yes, we said aluminum bottles. The Atlanta, Georgia USA-based beverage company chose the annual Consumer Analyst Group of New York conference in the Big Apple last Friday (February 22) to introduce the attractive, new 250-ml soda bottles, which come in red, black and silver aluminum.

Don't use plagiarized sources. Get your custom essay on
“ Food and Beverage Packaging Innovation ”
Get custom paper
NEW! smart matching with writer

Thus far, the beverage company is offering its regular Coke, Diet Coke and Coke Zero varieties in the red (pictured at left), black and silver aluminum bottles. A Coca-Cola executive at the conference on Friday said the company is test-marketing the upscale-looking aluminum pop bottles in the U. S. , and wanted to introduce them to the influential consumer analysts group as way to get attention and feedback on the new packaging concept. Coke isn’t doing away with its soda cans or plastic bottles.

Rather, its test-marketing the aluminum containers as a new packaging option. The beverage marketer also hopes the new, sleek look will attract more younger consumers who are always looking for the next new thing, along with more higher-income, upscale consumers who are into style. Currently, Coca-Cola isn’t selling its snazzy, aluminum-bottled Coke varieties in retail stores. Rather, they have been introduced thus far in select night clubs and bars, and offered for sale at some special events.

The beverage marketer is however selling a version of its fairly new Coca-Cola Blak (pictured at left), a carbonated coffee-cola beverage, in a brown and black colored 250-ml contoured aluminum bottle in France.

the aluminum bottle’s color is very similar to the color of the carbonated coffee beverage inside. In 2006, Cocoa-Cola bottled Coke and Diet Coke in similar sleek silver aluminum bottles for its year-long M5 promotion. The bottles, which were made for the beverage marketer by Exal USA, won a number of industry product packaging awards and were grabbed-up by consumers as collectors items.

Fosters is now exporting the aluminum-clad lager to the U. S. as well. In Mexico, a new beverage called “Hot Hangover Tea” is being marketed in silver, red and black aluminum bottles. The tea-based drink is said to cure a hangover in addition to tasting good. Of course, is one is drunk and drops the fairly heavy aluminum bottle on a toe, the cure might be worse than the affliction. French juice company Teisseire is marketing a line of juice cordials in 330-ml aluminum containers in retail food stores, cafes and other venues in France.

The bottles have a specially-shaped neck which is designed to make it easy for kids to grip. The bottle’s graphics are colorful and bold against a brushed aluminum background. Teisseire–as do all the other beverage companies–say a key selling point of the aluminum bottles, in addition to the sleek look, is that they chill rapidly. The bottles also are 100% aluminum so are recyclable as well. The beer category in particularly is seeing a mini-explosion in the use of aluminum bottles on a selective basis. In addition to Australia’s Fosters, U. S. raft beer marketer High Falls Brewing Company, based in Rochester, New York, has two varieties of beer–Pale Ale and Honey Brown lager–which come in aluminum bottles, and which are selling extremely well, especially in bars and clubs–but also in supermarkets, convenience and liquor stores. Other brewers are following suit and introducing varieties of their beers in aluminum bottles. Being such an international iconic brand though, the fact that Coca-Cola has introduced three of its Coke varieties in the sleek, contoured aluminum bottles is a big deal.

Coke’s innovation goes a long way in helping to legitimize the aluminum bottles as viable beverage packaging options. It will obviously be interesting to see if Coca-Cola decides to expand its current pilot-test of the of the contoured aluminum-bottled sodas beyond the night clubs and selected special event venues anytime soon. The company executive at the New York conference said the success of the current pilot programs would be the primary determining factor regarding if and when Coke expands distribution of the aluminum -glad soft drinks nationally to food and beverage stores.

It seems to use the Coke in the contoured aluminum bottles would be perfect for selected distribution to upscale retailers like Whole Foods Market, Target, Cost-Plus World Market, Trader Joe’s and the numerous regional, upscale food retailers throughout the U. S. , like Publix in Florida, H. E. B. in Texas, Bristol Farms and Gelson’s in Southern California, Wegman’s on the East Coast, and many others. The same in the UK with retailer’s like Waitrose, Sainsbury’s and Tesco, for example. We don’t see the aluminum bottles becoming a big-selling mainstay of the giant beverage company’s brand line-up though.

Price competition is too aggressive in the carbonated soft drink beverage category to do any serious volume with a package that isn’t dirt cheap to produce, bottle and sell. However, we think the sleek, contoured aluminum Coke drinks could do very well as a niche item at the upscale-type of retailers we mentioned above, as well as be a big hit at higher-end night clubs across the U. S. and internationally. Think New York and Miami in the USA, London, Moscow, Mexico City and a few other international cities where style and beverage choice seem to be synonymous these days.

For trend-setting consumers, packaging can be King. Not only that, but if a consumer saves enough of the sturdy, aluminum Coke bottles, they can even melt them down and make something out of them: perhaps a backyard BBQ, a post-modern aluminum planter box for the garden, or a sleek red or silver aluminum wagon for junior. In fact, perhaps Coca-Cola should launch a contest. Perhaps something like: Design the best item made out of used Coke aluminum soda bottles. Not only would that be fun marketing, it would be the green thing to do. After all, reuse is even better than recycling from an environmental standpoint. 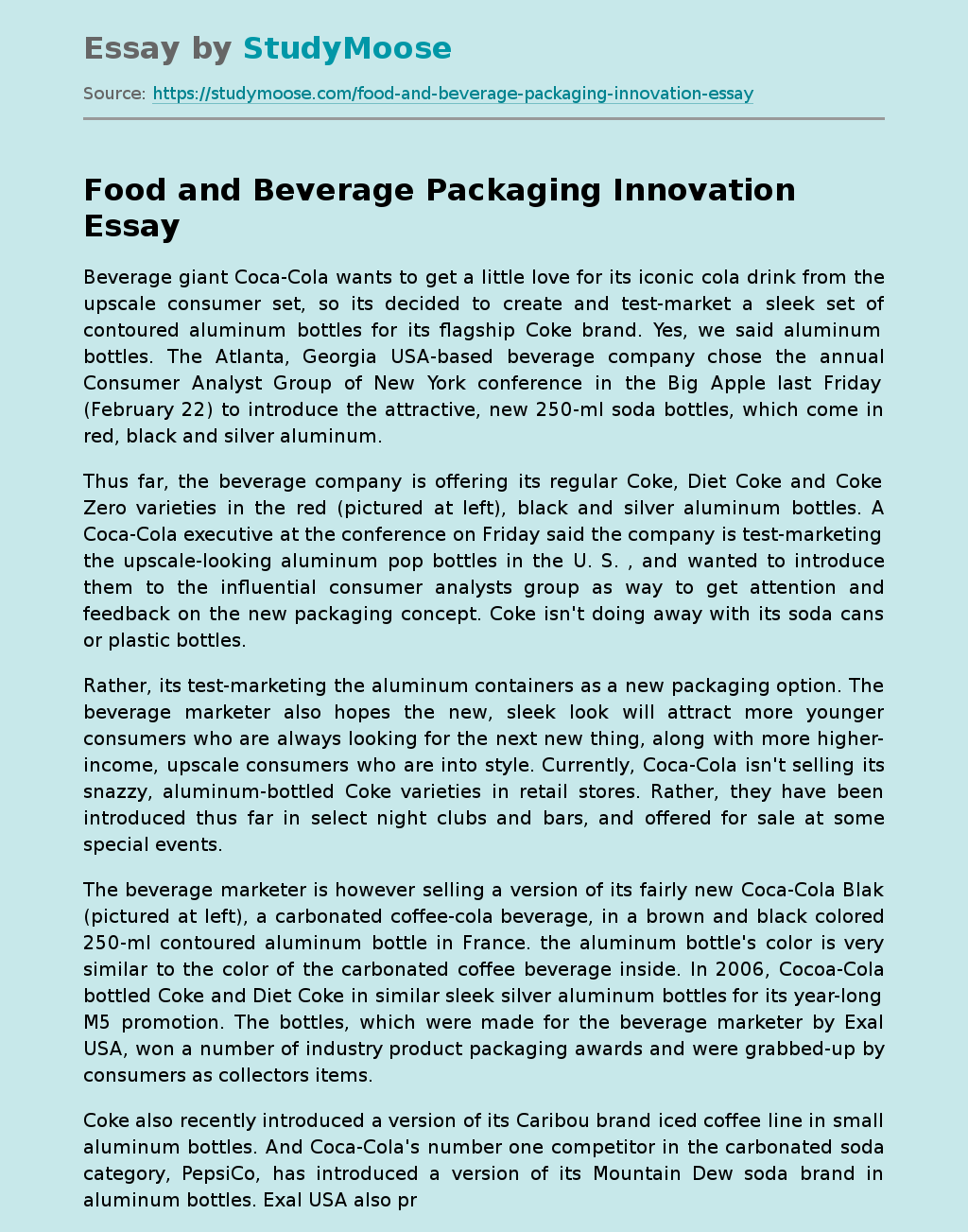