First Chapter of Birdsong About Time Before War

Significance of the setting described in chapter 1 of ‘Birdsong’

In the first chapter of ‘Birdsong’, Faulks uses setting particularly to foreshadow coming events, and in some way, prepare the reader for the story about to evolve, be it the love affair between Stephen and Isabelle, or the conflict of world war one. At the beginning of this chapter, we are confronted with a sense of normalcy, the ‘wagons’, ‘tanneries’ and ‘mills’ demonstrate the quiet, undisturbed life of those living in Amiens.

Don't use plagiarized sources.
Get Your Custom Essay on First Chapter of Birdsong About Time Before War Just from $13,9/Page

However, these simplistic images are contrasted with the evident affluence of some of the residents, ‘substantial gardens’, highlights the grandeur of the setting.

The repetition of ‘substantial’ used to describe both the gardens and the characteristics of Azaire reiterate the stability of the lives of the people of Amiens. This is somewhat ironic, as the readers know that this idea of constancy will soon be destroyed. The contrasting descriptions of the gardens reflect the relationships between the people in Amiens, the ‘wild, overgrown look’ and ‘bursting hedges’ contrasts the fact that they are ‘squared off and apportioned with civic precision’.

The adjectives, ‘wild’ and ‘bursting’ could perhaps be representative of Stephen and Isabelle’s love affair which develops throughout the book, their love is incomprehensible and confusing not only for themselves but for their family and friends. The word ‘bursting’ might be referencing Stephen’s endless desire and love for Isabelle, whilst ‘squared off’ highlights the private and undisturbed lifestyle of the Azaire family before the arrival of Stephen, furthermore, this also reflects the entrenched views at the dinner later in the chapter. Isabelle has been trapped within these moral guidelines, but when she meets Stephen she is able to break the barriers created by the society and find her true-self. Faulks uses vivid imagery as a literary device to describe the pre-war river Somme and the surrounding area, it is clear that his aim was to create the perception that France was a place of sanctuary, ‘patches of grass and wild flowers’ suggests that the areas that were plagued by death and destruction were once idyllic and peaceful.

This idea is reiterated in the line, ‘All along the river and its streams sat fishermen, slumped on their rods’, thus contrasting the hellish images of the Somme later in the book, which intensifies and heightens the pathos felt for those men who died in the war. The description of the Azaire’s house in chapter one, is not only a symbol of Azaire’s prosperity, but also the looming destruction, both marital and literal, ‘strong, formal front’, gives the reader the impression that this family is of high importance in Amiens, however, the ‘conflicting angles’ of the house contradicts this solidarity.

The word ‘conflicting’ presents the house as labyrinth-like and foreshadows the destruction of the house in the war as well as representing the conflicting views in the household and the crumbling relationships within the home; this is further supported by the word ‘dominated’, which symbolises the unbalanced and forceful relationship between Monsieur and Madame Azaire. Faulks establishes an atmosphere of tension, ‘the house was always a place of unseen footsteps’, this unnerves the reader and creates a significant lack of trust in the house and the people who inhabit it.

The idea that the footsteps are ‘unseen’ perhaps signifies the secretive affair between Mme Azaire and Stephen later in the book. Towards the end of the chapter, pathetic fallacy is used when Stephen overhears Azaire attack his wife, the verb ‘banged’ refers to the movement of the shutters however, the most significant feature used is the comparison of the noise of the shutter to the sound of Mme Azaire’s pain, ‘There came a noise that this time was not the shutter or the sound of water but something shriller and more human’, Faulks uses the setting to evoke pity for Isabelle, which provides the readers with an understanding of the motives and events of the affair between Stephen and Isabelle. Another important factor of the setting is the repetition of the colour red.

The ‘red creeper’ on the house, the ‘dark red stone’ on Mme Azaire’s neck and the ‘blood-red skirt’ all symbolise and foreshadow the slaughter and massacre of thousands of innocent men and civilians later in the book. Death and loss is a prominent theme throughout the book, and Faulks manages to prepare the readers for the ominous strife by providing subtle images and metaphors of the eradication. Another example of this is the frequent mention of the birds singing, ‘sounds of blackbirds’ and ‘birds in the background’, highlights the title and familiarises the reader with the presence of the birds. The references of the birds throughout the book, even in the war, evoke emotion, as even through all the destruction and death, the birds will always sing.

First Chapter of Birdsong About Time Before War. (2016, Apr 10). Retrieved from https://studymoose.com/first-chapter-of-birdsong-about-time-before-war-essay 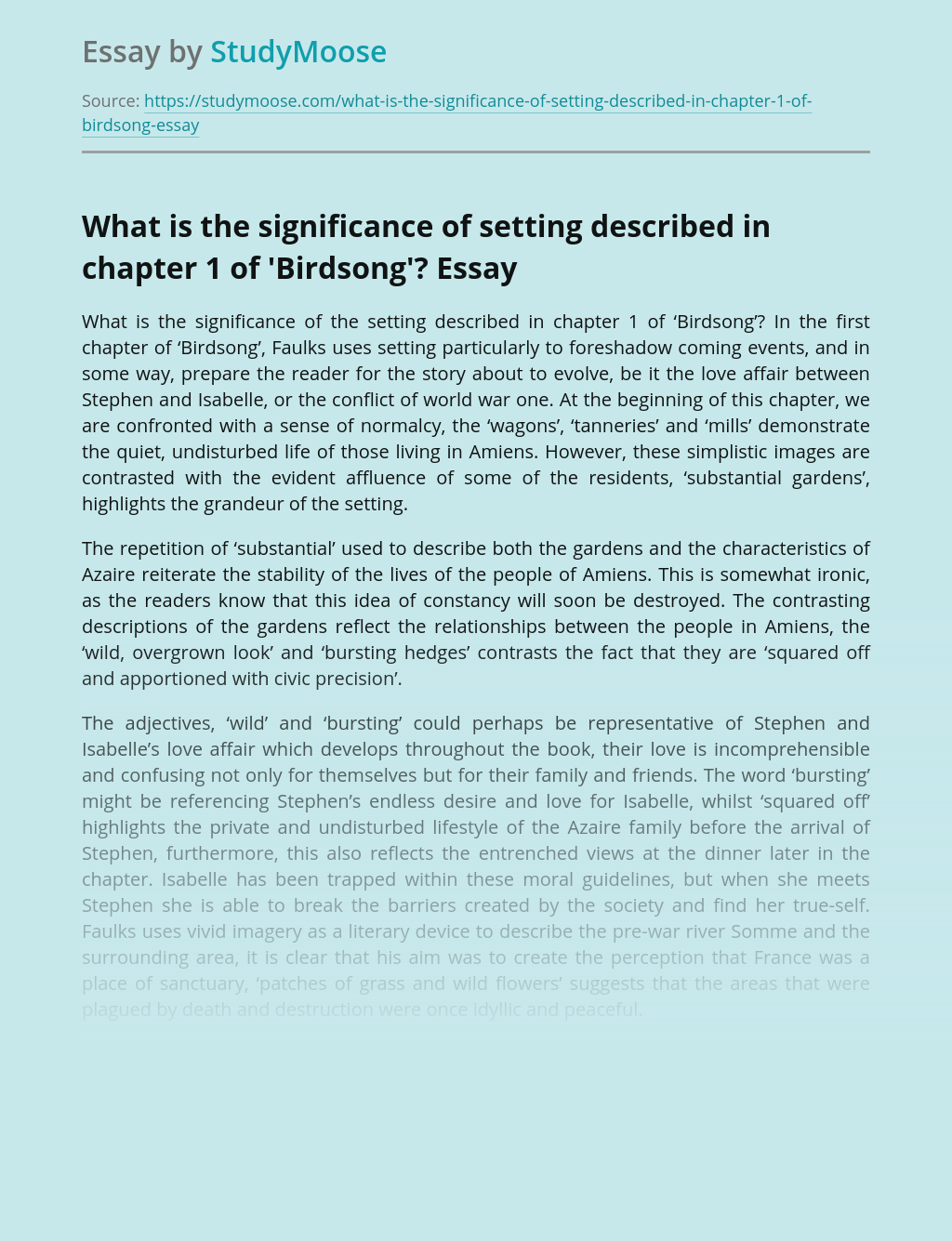 Alfred Lord Tennyson’s Poem Ulysses is written as a first person narrative from the perspective of a dissatisfied aged man, Ulysses, King of Ithaca. This essay will outline how Alfred Tennyson’s portrays Ulysses as an old man pondering about the life he lived as a younger man and longing for adventures similar to those he...

Get Essay
Jack: Almost the Hero of Lord of the Flies

Jack, leader of a group of choirboys and ultimately chief of the hunters, is Ralph’s principal antagonist. Described as having a full head of red hair, wearing a black cloak and bullying his way through the boys, his role as a villain is fairly clear from the beginning. Jack is destined to be the primary...

There is a great deal in keeping and evoking good and rational values. This is the chief lesson of that famous short story titled ‘The Necklace’ written by Guy de Maupassant (1) in the late Eighteenth Century. This short story tells about the proud-turned-tragic life of Madame Mathilde Loisel who dreams of an aristocratic status...

Journey to the Center of the Earth

Based on one graphic book, discuss a crucial lesson that you have discovered. An essential lesson that I gained from the graphic novel, Journey to the centre of the Earth is that we should never ever quit and believe in ourselves. Teacher Lidenbrock felt really excited when he found the document about how to get...