The main aim of this paper is to develop an accurate, fast and very efficient automatic attendance system using fingerprint verification technique. We propose a system in which fingerprint verification is done by using extraction of minutiae technique and the system that automates the whole process of taking attendance, The study was conducted using a quantitative approach by designing a questionnaire as the data collection instrument based on fingerprint matching biometric technologies. The survey involved 6 employees based on stratified random sampling technique.

Don't use plagiarized sources. Get your custom essay on
“ Fingerprint Verification in Attendance Monitoring System ”
Get custom paper
NEW! smart matching with writer

These are sometimes known as “epidermal ridges” which caused by the underlying interface between the dermal papillae of the dermis A fingerprint is an impression of the friction ridges on all parts of the finger. A friction ridge is a raised portion of the epidermis on the palmar (palm) or digits (fingers and toes) or plantar (sole) skin, consisting of one or more connected ridge units of friction ridge skin.

These are sometimes known as “epidermal ridges” which caused by the underlying interface between the dermal papillae of the dermis The term fingerprint is refers impressions transferred from the pad last joint of fingers and thumbs, though fingerprint cards also typically record portions of lower joint areas of the fingers (which are also used to make identifications)[6]. It is believed that no two people have identical fingerprint in world, so the fingerprint verification and identification is most popular way to verify the authenticity or identity of a person wherever the security is a problematic question.

The reason for popularity of fingerprint technique is uniqueness of person arises from his behavior; personal characteristics are like, for instance uniqueness, which indicates that each and every fingerprint is unique, different from one other. Universality, that means every person hold the individual characteristics of fingerprint. The three basic patterns of fingerprint ridges are the arch, loop, and whorl. An arch is a pattern where the ridges enter from one side of the finger, rise in the center forming an arc, and then exit the other side of the finger[13]. The loop is a pattern where the ridges enter from one side of a finger, form a curve, and tend to exit from the same side they enter. In the whorl pattern, ridges form circularly around a central point on the finger. Scientists have found that family members often share the same general fingerprint patterns, leading to the belief that these patterns are inherited.

Attendance Monitoring Model Automatic attendance system using fingerprint verification technique. A fingerprint is captured by user interface, which are likely to be an optical solid state or an ultrasound sensor. Generally, there are two approaches are used for fingerprint verification system among them first one is Minutiae based technique, in which minutiae is represented by ending or termination and bifurcations. Other one is Image based method or matching pattern. Minutiae-based matching: This is the most popular and widely used technique, being the basis of the fingerprint comparison made by fingerprint examiners. Minutiae are extracted from the two fingerprints and stored as sets of points in the two- dimensional plane.

Minutiae-based matching essentially consists of finding the alignment between the template and the input minutiae sets that results in the maximum number of minutiae pairings[1] Pattern or Image based matching: Pattern based matching use algorithms to compare the basic fingerprint patterns like arch, whorl or loop between a previously stored template and candidate fingerprint. For this purpose image is required to be alinment in same orientation. In matching process algorithms finds a central point on the fingerprint image and centre on the image. In pattern based algorithm, the template contains the type, size and orientation of pattern within the aligned fingerprint image.

PHASE-2:- Fingerprint recognition or authentication Fingerprint recognition or fingerprint authentication refers to the automated method of verifying a match between two human fingerprints. Fingerprints are one of many forms of biometrics used to identify individuals and verify their identity. This article touches on two major classes of algorithms (minutia and pattern) and four sensor designs (optical, ultrasonic, passive capacitance, and active capacitance). The analysis of fingerprints for matching purposes generally requires the comparison of several features of the print pattern.

These include patterns, which are aggregate characteristics of ridges, and minutia points, which are unique features found within the patterns.[1] It is also necessary to know the structure and properties of human skin in order to successfully employ some of the imaging technologies.[10]. Minutiae-based fingerprint matching algorithm has been proposed to solve two problems: correspondence and similarity computation. For the correspondence problem, use an alignment-based greedy matching algorithm to establish the correspondences between minutiae. Fingerprint recognition systems have the advantages of both ease of use and low cost.

Rao et al., International Journal of Advanced Research in Computer Science and Software Engineering 3(4), April – 2013, pp. 379-383 Phase-3:-Attendance update:Employee Attendance Management software is tightly integrated with the organization’s HR data. The in-time and out-time, lunch and breaks entered by the employees will help the respective authority in charge to keep in track the activities of the employees.  Employee Attendance Management System helps in keeping track of the attendance of employees based on various events like shift, late, overtime, permission, holiday working and on duty.[5]

Single click view of all time office events like hours worked, late, permission, on duty, overtime, leave of an employee for date or month period can also be obtained from this Attendance Management system.  Employee Attendance Management Software helps to monitor the productivity of the employees and also keep a check on the Employee absenteeism which in turn helps in achieving the organization goals.

The report will be generated with name of the employee matched fingerprint and stored in an attendance system. Attendance log of the month is shown in below table:

The proposed system will make way for perfect management of students and staff attendance and produce more accuracy. Future work on this project would include the creating of a matching algorithm that uses to mention and maintain the different type of leave such as on duty leave,leave without pay ,medical leave and soon.Also timely update the leave of the each employees when it take leave. The efficient matching algorithm have to be developed in theory and in code so that our goal of getting faster and more accurate matched image than with pre-existing software. 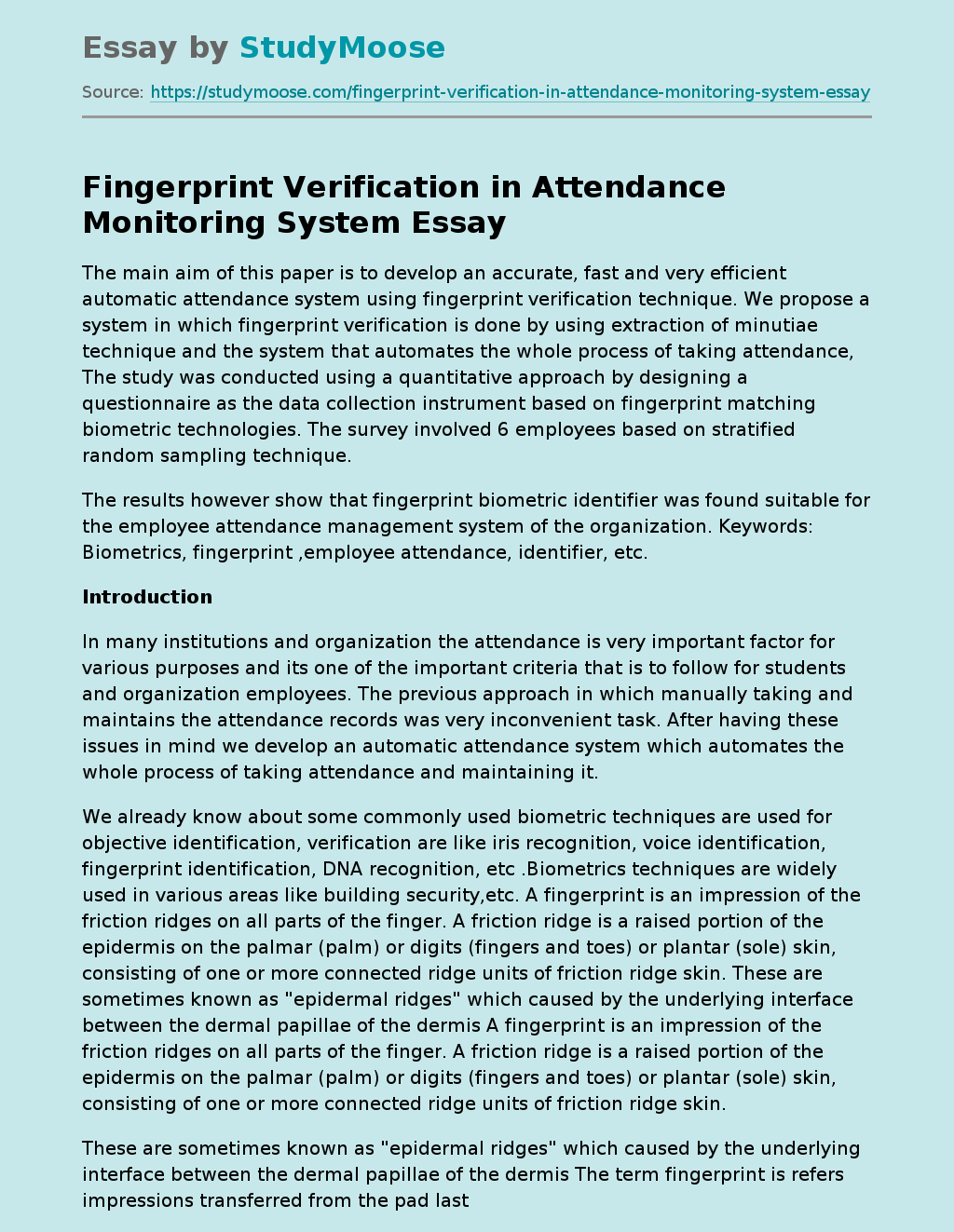