The Fine Line between Police Discretion and Corruption

In today’s law enforcement agencies there is a fine line between discretion and corruption. Imagine that you are a police officer, you pull over a car that you suspect is driven by someone who has had too much to drink. Upon reaching the window you find that it’s an old friend from school. Do you take him to jail or do you take him home? Police officers have the power to make this decision. In the world of the officer this could be a case of discretion but in the eye of the public it would most likely it would be considered corruption.

Don't use plagiarized sources. Get your custom essay on
“ The Fine Line between Police Discretion and Corruption ”
Get custom paper
NEW! smart matching with writer

The Fine Line between Police Discretion and Corruption Police corruption is a major problem for our society. It has been a growing problem since the days of Prohibition. One major concern is how to separate corruption and discretion. Studies have been taken and the results show that officers have different opinions on what corruption is and how it should be dealt with.

(Klockers, 2005, p. 102) The surveys were conducted on different departments; in turn different agencies have different cultures of integrity so the survey’s accuracy could be questioned (p. 02). With the information from the studies we only know that officers have different opinions on what is corruption and what is discretion. The combination of power, authority, and discretion in police work produces great potential for abuse. Police corruption is a complex problem, which has no solution. It is a problem that has and will continue to affect us all, whether we are civilians or law enforcement officers.

Police corruption has increased dramatically with the illegal cocaine trade, and the officer acting alone or in-groups to steal money from dealer and/or distribute cocaine themselves. Large groups of corrupt police officers have been caught in New York, New Orleans, Washington, Dc, and Los Angeles. Corruption within police departments falls into two basic categories; internal corruption, involving relationships among the police within the works of the police department and external corruption, which involves police contact with the public.

There are many different forms of corruption; gratuity, involving free meals, free dry cleaning and discounts; bribery, involving the exchange of money or something of value between the police and wrong doer (this is very common among narcotics officers); theft and Burglary, involving officers stealing property, money and/or drugs from the department; and stealing from people under the influence, who essentially become victims of the police. A new form of police corruption developed in the early 1980’s and into the 1990’s, which include brutality, discrimination, sexual harassment, intimidation, and illicit the use of weapons.

The Mollen Commission found that “most corrupt officers start off as honest and idealistic. ” The career of corruptions begins passively with accepting minor gratuities that gradually begin to involve more serious violation of the laws, involving larger amounts of money and officers initiating corrupt acts. It can be said that power inevitably tends to corrupt, and it is yet to be recognized that, while there is no reason to presume that police officers as individuals are any less fallible than other members of society, people are often shocked and outraged when officers are exposed violating the law.

The danger of police corruption could invert the formal goals of the organization and may lead to the use of organizational power to encourage and create crime rather than to deter it. There have been many attempts to put an end to police corruption, with no real success. An attempt to eliminate corruption, by increasing salaries, more training, incentive for education, and the development of policies that focus directly on factors leading to corruption. Despite many efforts by the police departments to control corruption, it still exists.

Corruption can take place at any level in the police department, from the patrol officer, to the chief of police. Controlling corruption begins with the chief of police and his attitude. The chief has to make it clear that corruption will not be tolerated. Establishing rules and regulations within the department to insure that all officers conform to certain behavior will help. A proactive integrity test should be in place. All police candidates should be pre-screened (background checks, drug test, alcohol testing), which will help to weed out the bad candidates from future police officer positions.

The fight against corruption will be a long battle as the problems of yesterday, still remain today, with little to no improvement. Discretion is defined as the opportunity for law enforcement officers to exercise choice in their daily activities. In most cases this is where corruption starts. An officer takes a free cup of coffee; next he’s taking bribes for simple tickets. Although most of the time it doesn’t reach the high level of corruption it does happen. Discretion in law enforcement has always been a hot topic with the police and the community.

The community thinks that the police do not use enough discretion and the police think they use too much discretion. In my opinion I believe that the police should be able to use discretion when they can as long as it doesn’t cross that fine line into corruption. The police make very hard decisions on a daily basis and you do not want an officer to rush into a decision where he either has to shoot, or has to talk you down. Discretion is a very important tool used by law enforcement. Police discretion designates power or freedom to judge and decide what needs to be done in a certain situation.

When the police get involved in a situation the first thing he does is figure out whether or not the situation should be criminalized or if it just involves some intervention by the police. For instance, if the police arrive at a bar fight there obviously has been a law broken. It is now up to the officer to figure out if they should arrest the person, or cut them a brake and let them go with a warning. The police may arrive on a scene to assist a woman giving birth; the officer must use discretion and make a quick decision.

The Fine Line between Police Discretion and Corruption. (2020, Jun 02). Retrieved from http://studymoose.com/fine-line-police-discretion-corruption-new-essay 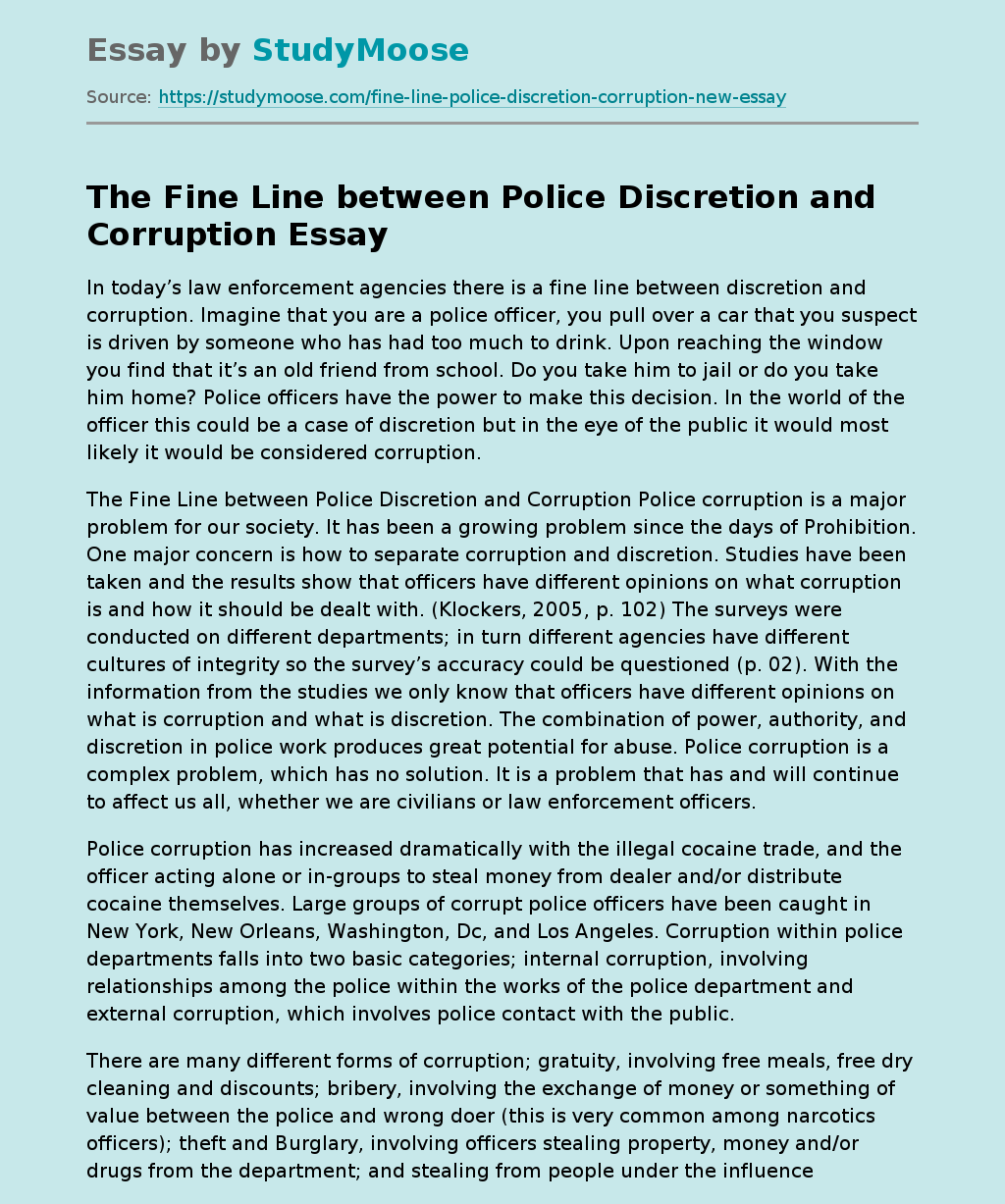