In the year 1996, Mike Nichols decided to produce and direct the film version of the highly successful 1978 stage play La Cage Aux Follies. Geared towards the western tastes of the American audience, he called the movie The Bird Cage and presented the public with a hilarious yet informative movie about a gay man who fathers a son after an affair with a woman. The film showcases the brilliant talent of Robin Williams as Armand Goldman, father to Val Goldman as portrayed by Dan Futterman.

Turn in your highest-quality paper
Get a qualified writer to help you with
“ Film Analysis: The Bird Cage ”
Get high-quality paper
NEW! AI matching with writer

Nathan Lane flawlessly essays the role of Albert Goldman, the “wife” involved in the homosexual relationship with Armand. Christine Baranski plays Katherine Archer, the biological mother of Val who had a one night stand with the openly gay Armand.

The movie gives us a glimpse into the reality that gay bashing and fear of homosexuals is really an unfounded fear that society insists on propagating rather than understanding that just because a person is homosexual, it does not mean he stops being a real live person.

Any homophobic person who views the movie must do so while making the effort to keep an open mind about the topic. The reality is that there is nothing to fear from these people. They, just like any normal person continuously struggles for acceptance and they are normal functioning human beings.

They are not an illness, nor a curse from god. Since Val was raised in a homosexual household, he is quite comfortable with his father and “stepmother” because they function as a family unit.

Proving therefore that the dynamics of a family exists regardless of whether the child is raised in a same sex or normal couple household. To Val, there is nothing strange about his family and he is highly confident of his sexuality.

His beliefs about how normal his household is get shaken the day he gets engaged to Barbara Keeley ( Calista Flockhart), the daughter of Senator Kevin Keeley, founder of the Coalition for Moral Order, as the name of the organization implies, the good senator would never approve of his daughter marrying a man raised in a homosexual household. In an effort to gain the approval of the senator for their engagement, Val must convince Armand to pretend to be a straight heterosexual for just one night and pretend to be a man with Katherine at his side.

As the night progresses and the best laid plans of Val begin to unravel and his secret threatens to become exposed with the arrival of his “grandmother”, who is really Albert Goldman in drag, Val realizes how unique his confusing family really is and that it does not matter if he was raised by 2 homosexuals. He eventually comes clean and everything works out in the end.

The Bird Cage is a movie that carries with it a very serious message regarding homophobia and the society that at the time could still be considered intolerant of gay partnerships. Indeed a lot has changed in the past 11 years since this movie was created. At the time the movie was filmed, Director Nichols was setting out to inform the viewing public about the misconceptions and myths about homosexuality by encouraging the homophobic viewer to become more tolerant of the alternative sex while understanding that they too have a place and bring a balance to the world we live in.

In an in independent review by James Berardinelli back in 1996, he praised the film for its creativity and humor in dealing with such a delicate topic as a child raised in a same sex family. Something which at the time was only whispered about. Mr. Berardinelli commented that “The Birdcage rivals A Midwinter’s Tale for the funniest movie released thus far in 1996. In fact, the film is so boisterously entertaining that it’s easy for the unsuspecting viewer not to realize that there’s a message here.

The structure of The Birdcage is designed to show us that there isn’t much difference between conservatives and liberals or straight and gay people. Nichols’ picture preaches tolerance and understanding, but neatly camouflages such themes beneath gaudy sets, colorful costumes, and unrestrained humor. The script has a few lulls, and there are times when it doesn’t make a lot of sense, but there are few better ways to spend a chilly winter evening than peering through the bars of The Birdcage.”

These days, homosexual relationships have begun to receive a certain amount of tolerance and acceptance by society. Although, society still frowns upon allowing a homosexual or, for that matter, lesbian couple to raise a child in a same sex household fearing that such a set up would confuse the child and encourage the child to follow the lifestyle he was immersed in all his life causing the child to become a homosexual, lesbian, or have a certain type of sexual abnormality about the child.

In a normal family, a mother or father is identified by his sexuality. Therefore there is no way to tell who is which in a homosexual family right? Wrong.  When you ask a gay couple who is the mother or father in the situation, they will always have a ready answer. This is because one of them seems to be born with the motherly instinct activated. Although it is believed that a child raised in a homosexual household will never experience the mother/father, husband/wife, mother/father relationships, he will however have exposure to the same through relatives in the family who belong to the standard definition of a family.

In the movie, Val realizes towards the end that he has 2 mothers who love him very much. One who gave him life, and the other, a man who, just like his mother has only his best interest at heart. Both persons only wanting to see him happy throughout his life. There is no real gender perception in terms of who is the mother or father role because the dynamic that describes either parent is the same, a person who loves and cares for the child and only wants the best for him or her. Why does that kind of relationship work? Parenthood requires one to be selfless and put the interest of the child ahead of your own. It does not matter if the child comes from a normal parent, one parent, or homosexual parent family, the guiding objective of parenting remains the same.

As evidenced by this movie and actual real life homosexual families, just because one is raised in a homosexual household does not make that person gay. According to the United Families International, there is no truth to the gay gene and therefore it cannot be considered genetic. The organizations explanation goes on to say that “ Homosexuality is not a genetically encoded condition. Contrary to media hype, there is no conclusive or compelling empirical evidence showing any absolute biological, genetic, or hormonal causation for homosexuality. Homosexual activist and molecular biologist Dean Hamer’s study claiming the existence of a homosexual gene has been scientifically discredited.

Comparing the predisposition to homosexuality to alcoholism, it is further stated that “ Some people may have a predisposition to alcoholism, yet we do not affirm their disposition, but rather treat their condition and help them change. Current evidence suggests that environmental, familial, and personal influences contribute significantly to the development of homosexual tendencies. Seventy years of therapeutic counseling and case studies show a remarkable consistency concerning the origins of the homosexual impulse as an uncompleted gender identity seeking after its own sex to replace what was not fully developed in childhood”

As for the social issues a child raised in a homosexual household faces, I will agree with those who say that they face a rougher time in the real world than the children from regular parent households. This is mainly because children are by nature mean and love to tease each other without realizing how it emotionally affects their fellow child.

This however should only serve to help strengthen the child’s personality as well as help him to further understand how different his or her own family is from everyone else. But, that does not make him any less of a human being nor should it prevent him or her from enjoying childhood. Val was practically raised in a same sex household and he grew up to become a responsible, caring, and understanding individual. Something that cannot often be said even for children raised in normal parent households.

A child comes to this world as a blank slate. It is the parents of the child who write on that slate and determine what a child’s value system will be based upon. A child learns his values in life by the example and reinforcement of his parents. It is up to the parent to teach their child the value of tolerance and acceptance of something that is deemed different in our society such as homosexuality and the fact there will be a few kids here and there whom he or she may mingle with who comes from such an upbringing. Therefore, how comfortable and confident a child will be about his sexual orientation, as well as how he accepts those of a highly different gender than his or hers solely depends upon how the parents explain the moral value of treating each sex fairly while highlighting the need for tolerance and understanding of such people.

To illustrate the point about the value system of a child, one only has to view how well adjusted Val was brought up by both his straight mother, gay father and his partner to see that any value system an adult has in place was developed during his childhood. He was taught the value of tolerance and understanding from the minute he could walk and it made a huge difference in regards to how he accepted people in his life when he became an adult. According to Lois Clark, who compiled the Ohio State University Fact Sheet, communicating with children can help develop their sense of values.

Simply put, Ms. Clark indicates that “When talking to children, it is important to tell them what acceptable behavior is and why it is acceptable. Simply telling a child not to do something does not teach the child anything except he should not do that particular thing. By explaining the reasoning behind the request, the child can learn.” This method of child rearing, wherein the parent will have the opportunity to explain about sexual differences to the child can prove to be a valuable part of a child’s value system in today’s day and age where homosexuality and lesbianism are slowly becoming an accepted part of society. 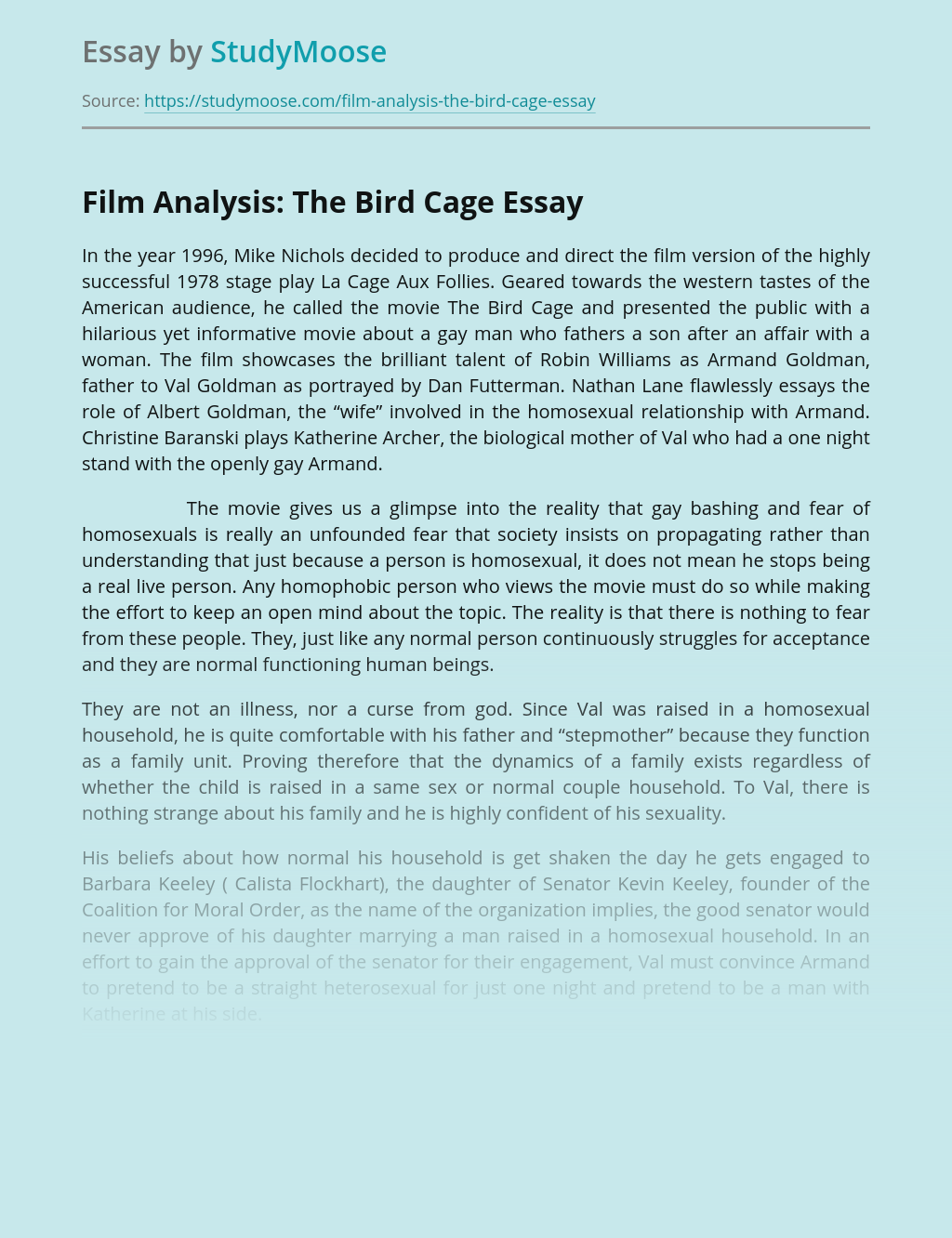 Turn in your highest-quality paper
Get a qualified writer to help you with
“ Film Analysis: The Bird Cage ”
Get high-quality paper
Helping students since 2015
Stay Safe, Stay Original