Figures of Authority in" The Crucible" by Arthur Miller

One of the most important themes in Arthur Miller’s The Crucible is the nature of authority and people who abuse it. In the story, authority is determined by the religious status one has in the community and often education plays a role. Nowadays, authority is noted by the place you have in society and is also based on education and sometimes wealth. It seems that whenever there is a figure of authority, there is always someone abusing the power designated to them.

Turn in your highest-quality paper
Get a qualified writer to help you with
“ Figures of Authority in” The Crucible” by Arthur Miller ”
Get high-quality paper
NEW! AI matching with writer

Back in the Puritan times, religious leaders like reverends and people skilled in the teachings of the Bible were the authority figures; and even with attempting to do good by following the word of God like they were supposed to, there were many occurrences where they smuggled in some law or did something for the benefit of themselves because they dominated and felt like no one below them could rebel against that or else they would be punished.

This happened so often because people feared authority and the thought of the punishment they would receive was horrible because everything was tolerated a lot less, so they did not rise up to correct these happenings. One example of the power of authority being abused in The Crucible, is the fact that Reverend Parris spends too much money on things that the church doesn’t need, for his own benefit.

It seems as though he is more preoccupied with getting things that are an advantage to himself and his name, than he is with his religion and God.

An example of someone noticing this is when John Proctor says, “A minister may pray to God without he have golden candlesticks upon the altar sir, when I look to heaven and see my money glaring at Parris’s elbows- it hurt my prayer,” and then he goes on to say, “I like it not that Mr. Parris should lay his hand upon my baby. I see no light of God in that man. I’ll not conceal it.'” (Act 2, Scene 3 p., 856). He is speaking of not baptizing his children because he does not believe that Parris is a proper server of God.

Now, authority is everywhere, from the president, to the police, to people you respect like teachers and parents. You see the neglect of power even more nowadays than you did in the Puritan times, and they usually leave a larger impact. For example, in an article by Catherine Ford titled, ‘Give authority figures an inch… they’ll take a mile,’ she speaks of a high school in Canada where teachers were given the right by the Supreme Court of Canada to strip-search their students if they are thought to be breaking the rules of authority. Twenty freshman boys at Kingswell High School in Ontario were stripped searched when they were the suspects in stealing ninety dollars from the school. Strip-searching teenagers for such a minor offense shouldn’t be allowed, even if the government in Canada has a different idea on that than the United States does. It even states in the article that, “A malicious and predatory authority can make hard time an exquisitely painful emotional, mental and physical experience.” Now after the ordeal, the vice president of the school realizes that it was the wrong thing to do. How is it that people don’t realize something is wrong until after it is done?

Another example of the abuse of power is the whole rule of Saddam Hussein in Iraq. He goes and kills innocent people in his country because they do not support him fully. He took over Iraq with military force and is now the president, or military leader of that country. He abuses the power he has given himself quite often and in cruel ways. For example, in an article written by Robert Prather, he states, “To accomplish his own rule, Saddam has shed so much blood. If his aim is for his power to be transferred to his family after his death, I think this is far into the realm of wishful thinking.” That quote taken from the article shows that to get what he wants, Saddam uses the power he has to kill people that stand up against him. It is almost like it was back in the Puritan days where the people were afraid to stand up against the one who was in charge, except now, you can’t even identify his followers, so if you were to say something insulting about Hussein, you could get arrested or killed without even expecting it.

As you can see, in most cases when authority is represented, there is always going to be one person misusing the power that they have in being authority; and when there are people misusing their power, there are always going to be people below them, too afraid to stand up for what they know is right. Hopefully, sometime when history decides to stop repeating itself, people will learn that if they stick together, then they can rebel against the one or few that are misusing their power of authority.

Figures of Authority in" The Crucible" by Arthur Miller. (2016, Jun 30). Retrieved from https://studymoose.com/figures-of-authority-in-the-crucible-by-arthur-miller-essay 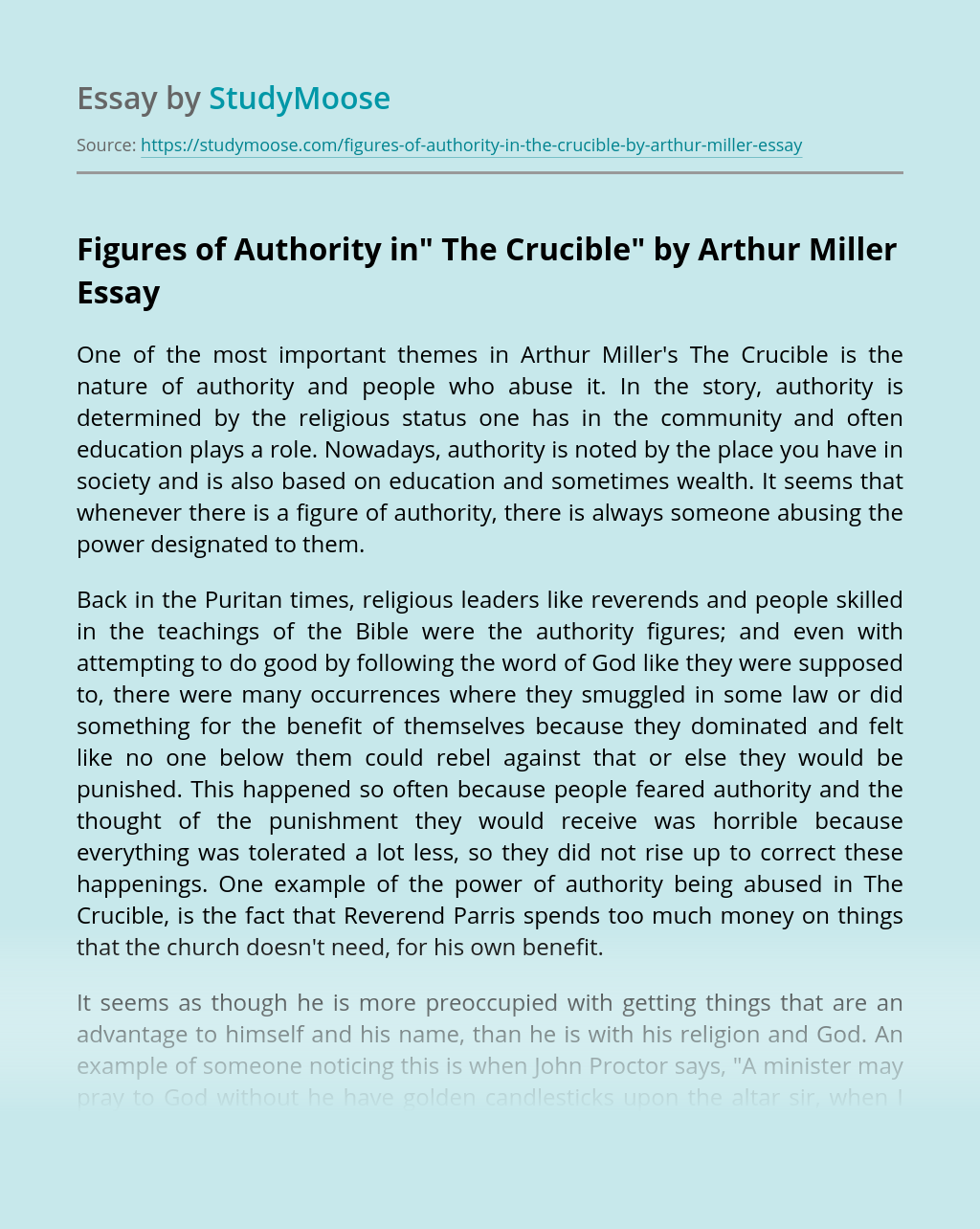 Turn in your highest-quality paper
Get a qualified writer to help you with
“ Figures of Authority in” The Crucible” by Arthur Miller ”
Get high-quality paper
Helping students since 2015
Stay Safe, Stay Original