One heavy black coat. This includes the clothes the applicant has on his back.” The men, who are leaving conformist society end up wearing the uniform of Tyler’s space monkeys, one of dozens of identical clones, dressing the same, eating the same and listening to Tyler’s speeches. “You are not a beautiful and unique snowflake. … Our culture has made us all the same. … We all want the same. Individually, we are nothing.”

Tyler is criticising society for making everyone the same yet in Project Mayhem, the men become drones to Tyler’s queen.

Don't use plagiarized sources. Get your custom essay on
“ Fight Club Review ”
Get custom paper
NEW! smart matching with writer

They perform their duties, whether they are making soap to sell or turn into explosives, tending the garden growing herbs to add to the soap, or simply cleaning the toilet all day. Every week after every Fight Club Tyler gives each man a homework assignment, demeaning them and treating them like children.

“Fight Club” is also about the impact of broken families, men raised by women, men with absent fathers.

“I’m a thirty year old boy, and I’m wondering if another woman is really the answer I need.” Both Tyler and Joe are from single parent families and this becomes the basis of Fight Club because instead of seeing whom they are fighting at Fight club they fight their absent fathers and everything else they hate in their lives.

“If you never know your father, if your father bails out or dies or is never at home, what do you believe about God?” This concept is mirrored in Joe’s quest for a father figure either in his boss or in Tyler.

Tyler kills Joe’s Boss but then Joe must kill Tyler as he realises he needs no father figure, no model for God. Thus there is the suggestion that because these characters did not know their fathers, they had a different view of masculinity. This challenges the traditional idea of paternalism and the father and son bond. The Fight Club experience has a huge impact on the men who participate, even influencing their view of God.

The masculinity theme is also cleverly applied to one of the book’s minor characters, Bob. “Raise the testosterone level too much, your body ups the estrogen to seek a balance … too much estrogen, and you get bitch tits.” Bob is an ex body-builder and due to his excessive steroid use he ended up with testicular cancer, the medication he took had the side effect of giving him breasts. This rather frightening revelation almost implies that if you get too much of testosterone, the male hormone, associated with masculinity, you can end up looking like Bob, a man with woman’s breasts.

Project Mayhem and Fight Club provide the anarchy in “Fight Club”. Joe is too perfect and so creates Tyler to strike back against the world.

“You justify anarchy,” Tyler says. “You figure it out.” Joe and Tyler recruit hundreds of men into Fight Club and then into Project Mayhem. Palahniuk shows these men as gullible even as they try to kill their own leader because he had told them to do so. This shows that they just needed an ideal to follow, once Tyler/Joe had given them it they abandoned him just as they were abandoned. Palahniuk uses very strange language in “Fight Club”. The story is told through a narrator but when the narrator speaks, no punctuation is used so the narrator’s thoughts become mixed with what he is saying.

“I tell Tyler, Marla Singer doesn’t need a lover, she needs a case worker. Tyler says, “Don’t call this love.” Long story short, now Marla’s out to ruin another part of my life.” The narrator is saying the first two lines but no speech marks are used, the next line is said by another character using speech marks and the last line is a thought of the narrator and has no speech marks. This confused stream of consciousness conveys the idea of the character’s non-conformity and inability to fit in. By ignoring grammatical rules the author emphasizes that they are defying convention.

Another aspect of unusual language which I enjoyed in the novel, is where Joe writes Haiku poems, which just pop up in the text with no warning. ‘One of these is, “Worker bees can leave Even drones can fly away The queen is their slave” These show up several times in the novel and seem to show how Joe feels trapped in his life and job. The idea of “Worker bees” conveys the idea of hundred of identical clones with no personality, which Joe believes sums up the business world. He and Tyler both believe that the Bosses of companies all depend on the blue and white-collar workers. Tyler shows this when he tells the police commissioner,

“The people you’re trying to step on, we’re everyone you depend on. … We guard you while you are asleep… We control every part of your life.” The word choice in “trying to step on” also emphasizes that Joe feels that workers are treated as insects. This passage also carries a hint of the anarchy threatened by Project Mayhem. This odd use of language can be seen throughout the novel. 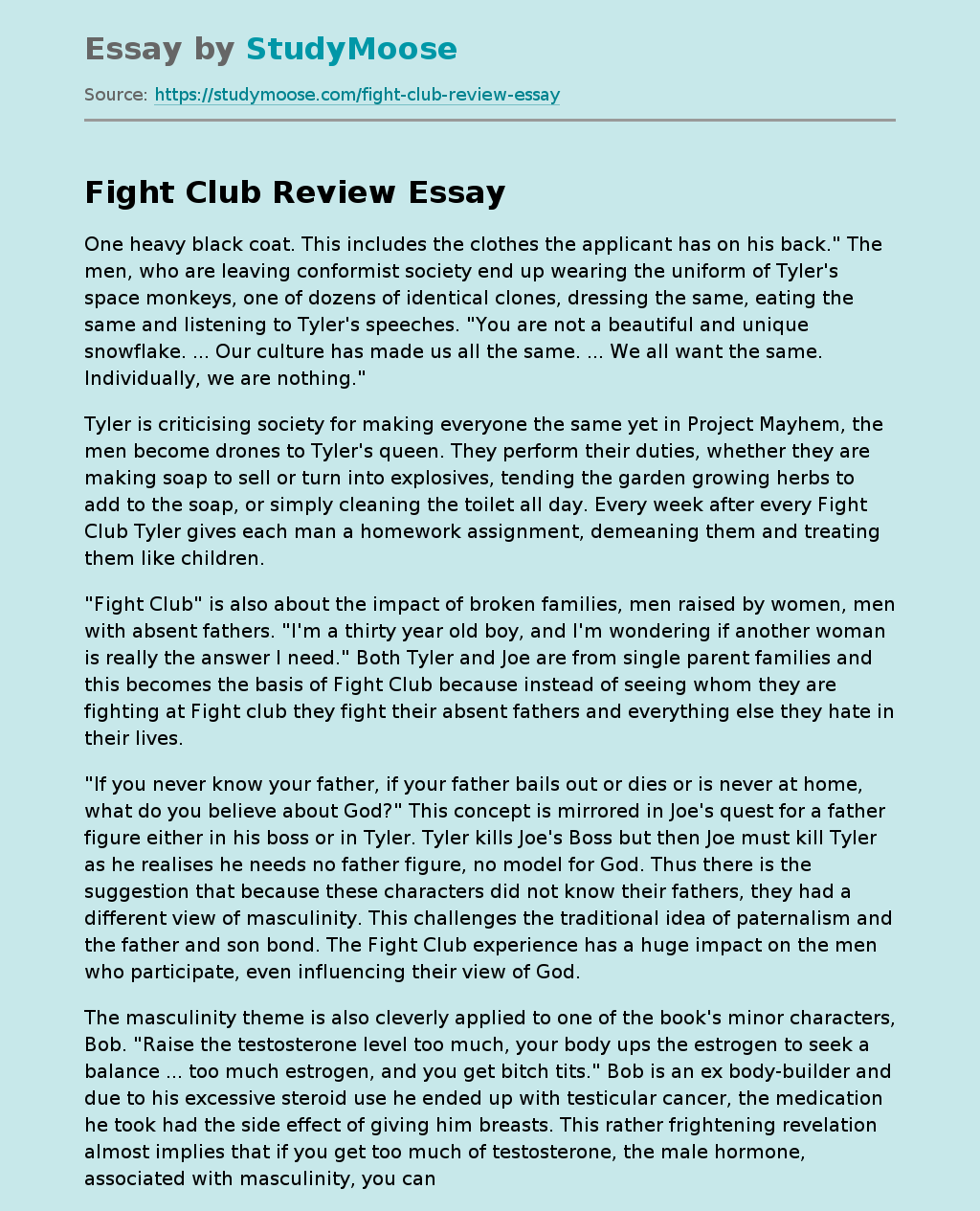