They asked for her bed sheets when she woke up the night after her wedding. She cannot refuse, she could lose her family and her name will be degraded. This is the story of many females, especially in Egypt. The tradition is that the groom’s mother usually asks for the bed sheets in the morning to make sure that her daughter in law is a virgin. This also is the cause of FGM, Female Genital Mutilation. Virginity testing’s for females during the Egyptian revolution were being done to prevent the women from claiming that they were raped during their arrest.

Don't use plagiarized sources. Get your custom essay on
“ Female Genital Mutilation as Abuse and Gender Inequality ”
Get custom paper
NEW! smart matching with writer

Why should this be a problem in the first place? Why should they need virginity testing? This is the double standard I am approaching, no man will be tested for his virginity. In a way, these expectations change the meaning of virginity completely. Virginity depends on ones interpretation; it usually means staying pure until he/she is married.

However, there are other things aside from intercourse that can be done.

Is the concept of virginity still relevant then? Because if being a virgin means having a hymen, then all women can be virgins with surgery. What is a virgin? And why do we have these labels to begin with? Is one still a virgin after oral sex? The term has sex in it does it not? What is it that we search for? What are these men looking for? I am not promoting women to behave promiscuously. My point being is why does it matter? Who created these rules for us? If men were to be looked down upon just as women are for not being virgins then it would not be so controversial.

Why is a male a “player” when he has sex with many women, but a female is referred to as a “slut”? Who promoted this logic for us, what is the difference? Shouldn’t it be a moral code, instead of basing a future on whether she bleeds or not? Change for society needs to be done. It seems that virginity has become an excuse for “perfection.” Humans thrive on being perfect, or searching for someone perfect because it makes us feel better about ourselves.

We seem to have placed perfection where it should not belong. A society should not be blinded by such standards. Yes, God commanded men and women to remain virgins until marriage, and it has been promoted in many religions. However, the world seems to be changing so much, yet we seem to still be stuck onto “old school” thinking, we are living in a retrograde moving society. Who are we to judge, when we all bleed the same color. We complain about society, yet we are society. If we are fighting for change then why are we not doing anything about it? On the contrary, when change is initiated the person is most likely to be attacked or ignored. For example, Samira Ibrahim who claimed that she underwent a virginity test after she was arrested with seventeen other women during a demonstration in Tahrir Square a year ago.

Although, her case got to court, she was ignored for a while. She did not win the case of course; however, she did raise awareness to the situation, and the case was brought to court through public pressure. An Egyptian civilian court has since ordered that such tests on women in military detention must be stopped. Conversely, the problem with today’s world is that skeptics are always there against those who try to better society. The law is created to protect the military, not quite the people. The victory gained was the awareness raised. A society based on Morals vs. Fears, when people are forced to behave a certain way, or are expected to have certain standards they begin to deny their morals. Fear strikes people’s integrity, and tests them. We ignore our morals to follow rules. For example, when a female surgically replaces her hymen, she is denying her morals to be accepted. She is lying in fear of rejection.

In a way it seems that women are viewed as sexual objects, or “baby makers.” It is not okay and it is not acceptable that if she acted like a man she would be degraded, and looked down upon. This double standard should not exist. Personally, staying a virgin until marriage, I WILL ask my husband if he is a virgin as well, and I will reject him if he is not. I refuse to give into this ongoing “tradition” if my husband expects me to stay this way, then I do as well. It is unfair to call it “giving in to pressure” when he does it; however, with a female she is whore if she does the same. He is forgiven if he learned from his “mistake”, but she is still “loose” no matter what she’s learned. Moreover, it seems to be easier to pressure a female than it is with a male. FGM known as Female Genital Mutilation is illegal; however, that does not seem to stop the procedure from continuing.

In Egypt, usually beginning at the age of twelve is when operations are being done. Personally, my mother wanted it for me, however, my father refused. At the time I was eleven, I did not know what this was. In eighth grade I decided to do research on it, and it angered me. It angered me so much because I did not know what this was and it was going to happen to me. I did not understand, all I knew is that it was “for the best.” My mother did ask me, however, how should I know what this was at age eleven? No kid does. “Female genital cutting (FGC), also known as female genital mutilation (FGM) and female circumcision, comprises all procedures involving partial or total removal of the external genitalia, or other injury to the female genital organs, for cultural or other nontherapeutic reasons. The practice of female circumcision is widespread in Egypt.”—Dr. Tarek. It has become even more crucial in recent years for females to be circumcised because of lack of trust. Women deny having sex before marriage, so since the clitoris enhances sexual desire, removing it would help lessen the temptation.

The concept of virginity has gotten so far that most cultures have come to the belief that FGM is being on the right path. “We all want it. Why is it America’s business?”— Half the Sky Pg 223. Women want it, need it because it is the “right thing to do”. Without it, they will not get married, because the husband will think that she has “been around”. Once again, there is no problem if he has been; however, it is forbidden for her. There is no way to prove a man is a virgin but with a female, when she is mutilated in some countries she is completely “cleaned up”, her entire genital area is cut, “… The vaginal opening is then typically sewn up with a wild thistle (leaving a small opening for menstrual blood)… when she is married, her husband or a midwife uses a knife to reopen the sealed part so that she can have intercourse.”—Pg 222. Of course, this is done to keep her a virgin until marriage, if she is not “stitched up” then that would be an indication of her having intercourse before marriage.

Some females are naturally born without hymens, and there are also many accidents that can cause a hymen to break. For instance, bike riding, gymnastics, or even wearing tampons. It is thought that hymen tissue remains as an indication of vaginal development. It was intended to keep germs and dirt out of the vagina. In infants and children, the hymen would serve as a protective purpose, to prevent things from being pushed into the vagina.

Hymens vary in shape, size, and thickness. There are many different types of hymens in women. There is an Annular hymen which the hymen forms a ring around the vaginal opening. There is a Septate which the hymen has one or more bands extending across the opening. A Cribriform is where the hymen stretches completely across the vaginal opening, but is punctured with several holes. Lastly, a Parous Introitus which refers to the vaginal opening which has had a baby pass through it and consequently has nothing left of its hymen but a fleshy irregular outline decorating its perimeter. Most hymens don’t fully cover the vaginal entry so that menstrual fluid can leave the body. In rare instances, the hymen can be thick, covering the entire vaginal opening, an imperforate hymen. This kind of hymen may not allow a woman to menstruate, or have penetration during sexual activity. However, if there’s cyclic build up of the uterine lining, but no menstrual flow, the vagina will fill with blood that can back up into the uterus, and the female must seek help immediately.

It seems that the double standard does not only apply to Egypt, apparently it is worldwide, for example in Half The Sky, “… Not only does the Bible advocate stoning girls to death when they fail to bleed on their wedding sheets, but Solon, the great lawgiver of ancient Athens, prescribed that no Athenian could be sold into slavery… who lost her virginity before marriage. In China, a neo-Confucian saying …“For a woman to starve to death is a small matter, but for her to lose her chastity is a calamity.”—Pg. 81. Unfortunately, these ruthless rules are reality, and are or were once enforced. He was never in the quotes, He was never demanded to stay a virgin, and He made the rules.

“Your body is a wrapped lollipop. When you have sex with a man, he unwraps your lollipop and sucks on it. It may feel great at first at the time, but, unfortunately, when he’s done with you, all you have left for your next partner is a poorly wrapped, saliva-fouled sucker.”— Pg. 137. This is the problem, the passage/ quote did not approach a non-virgin male. If he isn’t a virgin his wife isn’t considered a “poorly wrapped, saliva-fouled sucker” this only applies to a non-virgin female. This is the mentality that has brainwashed society. In my opinion, if she’s the lollipop then he’s a sucker, for sucking.

Double standards and seeking perfection will ultimately destroy humanity. Perfection does not exist, we are all flawed. A man should not base his judgment on a woman from her past. I am not declaring that a woman losing her virginity before marriage is a mistake or a flaw because it is ultimately her choice. However, what I am trying to convey is that the standards of “perfection” in society are not reached. “Society killed the teenager.”-Anonymous, in fact society killed the world. 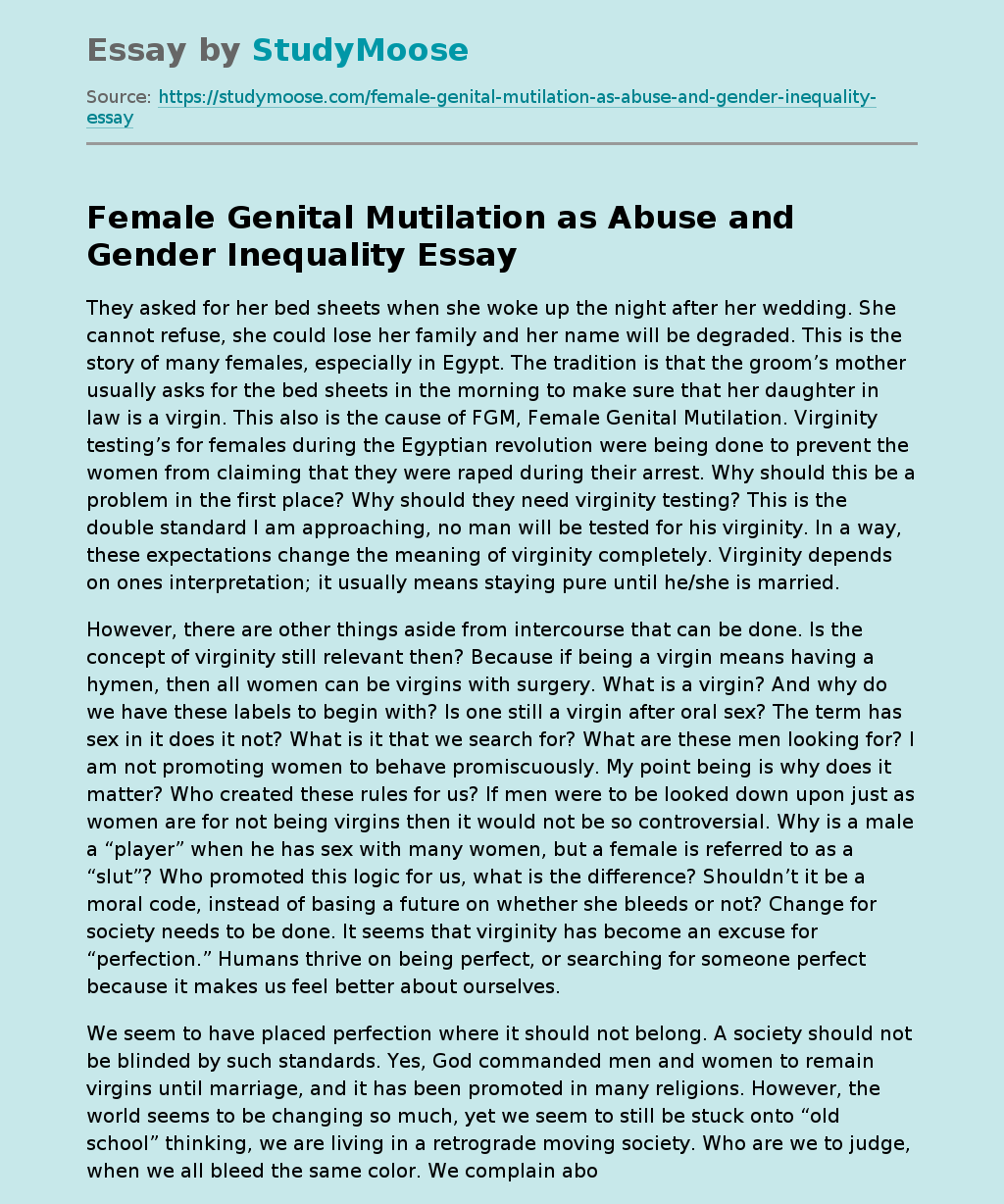