Fear and paranoia created in the crucible

The Crucible is full of heat, suspense, extramarital sex, public lies and ruthless prosecution, All of which add up to produce a book in which the theme of fear and paranoia is unquestionably a part in these small-town people’s lives. During the crucible, Miller tries to project a lot of fear and paranoia into his work, enabling the reader to physically and emotionally feel their part in Salem’s history. Salem is taken from the Hebrew Shalom meaning peace however from Millers part in the crucible; a darker, chaotic view is created for the readers, and the reality of peace is more shadowed by Salem and its characters dark paranoia.

Don't use plagiarized sources. Get your custom essay on
“ Fear and paranoia created in the crucible ”
Get custom paper
NEW! smart matching with writer

The overall effect that paranoia can set on a town is extraordinary, from being a small, well-known, blissful town; one mistake from a paranoid person can set off the whole town and can therefore disrupt and disturb it. Take Salem for example, a bunch of girls found dancing in the wood are immediately accused of doing witchcraft and trafficking with the devil, the paranoia of this town is really expressed by the fact that within the next day everybody knew about the “incident” and everybody except relatives had been quick to judge and had labelled them all witches, expressing the paranoia and fear among this small town.

Miller’s attempts to create fear and paranoia are demonstrated in the way that he gives the readers and the characters something to be afraid of, fear must have a cause. Miller’s attempts at this are shown in the first scene as Parris questions and harasses Abigail because of his own paranoid ways that they were trafficking with the devil or even conjuring witchcraft in the woods, and the fear of his position and authority as reverend being taken from him and being thrown out of Salem.

This fear is revealed as Parris says, “Now then, in the midst of such disruption, my own household is discovered to be the very centre of some obscene practice. ” The life of many in Salem is orderly and controlled through religion fear of Gods might, not going to church could result in being sent into hell or purgatory after death. For example on page seventy three, as john proctor is quickly judged and damned and also accused by Cheever by saying “He plough on Sunday, sir”, thereby condemning proctor and heavily persuading Danforth to jail John Proctor.

Fear for many of the characters is set by Miller on several different levels and so for a great number of people in the village, the churches power causes fear to do with the churches authority on how they have the power along with the law over witches, in the means of hangings, burnings and executions etc. The ordinary of the folk in the town have simple minds and can easily be manipulated or taken advantage over by the more superior of the town members, they can therefore easily be afraid of witches and their powers.

These people also believed that their religion, Christianity was the only religion for the people, and straying from this religion was heresy. If a person tried to be an individual or “loner”, they were looked down upon, for that would mean they were leaving the community of belief that was supposed to be held by all members of the society. Salem was a theocracy, a type of government formed by combining the institutions of both state and church. When certain people began to be individualists, fear set into the community. It was this fear that prompted the Salem witch trials, the story that the play begins to tell.

Because Salem’s inhabitants lived such ordinary lives, most of which were ruled or pressured intently by God, their lives became disorderly and the highers lose control, causing unrest among people’s lives for the reason that people need routine. However, once the highers lose control they therefore become afraid of losing their power and open to people becoming individuals and not being afraid to speak out or even proceed in the manner of life that they choose. As the play progresses, the church begins to lose power over individualists and rebels and consequently see people changing their ways of life because of the more recent happenings.

This is indignation towards the church and their lives and is shown on page seven as she says, “Uncle, we did dance; let you tell them I confessed it – and I’ll be whipped if I must be. But they’re speakin’ of witchcraft. Betty’s not witched. ” This quotation from Abigail is a suggestion to the rest of the town by expressing her point of not being witch, yet just dancing and symbolising their rebellious nature and newly found individualism. The townsfolk become confused with an alteration in the Status quo and are afraid of the unknown, so finally fear and paranoia sets in.

Miller wrote the play from the stand point that people must not only be careful about how they react to certain situations, but that they also cannot avoid involvement in other issues, for that would mean to deny one’s own personal responsibility in the human race. Why are themes important to Miller? Themes are extremely and increasingly important to Miller as without these, plays or books are simply pieces of writing with no morale, theme or even point, and therefore the reader gains nothing from these books and feels no great need to read them, making them unsellable and pointless.

Even the title plays a big part in the understanding of the book, for example in the crucible, this meaning a container which metals are heated to extract the poor element from dross or impurities, shows that this stands for the morale or point of the book that John Proctor is tested in a life-threatening ordeal and his death at the end rather than the betrayal of his confidence shows us that he too has come through the fire to be purified. Themes are important to Miller, the reader and the characters and this is shown in each of Millers books produced before he wrote and directed the crucible.

In 1950, he wrote an adaptation of an enemy of the people, and the theme being the individual who insists he is right while the vast majority is absolutely wrong, this book even tying in with the crucible slightly. As well as all the other plays and books by Arthur Miller, like St. joan and the crucible and a man for all seasons, all his books are based on one similar thing and this is the overall main theme – a real historical happening, and this is the same case for the majority of his plays, all having a similar theme.

In all three books in this case, the audience comes to value and applaud the stand made by the individual against the apparent vindictiveness of the law. From all of Millers books and plays, the crucible is renound for being the best and is shown and read all over the world, because of its meaning and theme of being somewhat different in different places and moments, giving information about the country it is being acted in, and so not only gives something extra to the reader but gives something back to the author each time it is acted out.

The crucible is forever distinct of its time and maintains relevance because of its theme. The theme of the crucible however being of course, the conflict between a mans raw deeds and his conception of himself; the question of whether conscience is in fact an organic part of the human being, and what happens when it is handed over not merely to the state or the mores of the time but o one’s friend or wife.

Fear and paranoia created in the crucible. (2021, May 04). Retrieved from https://studymoose.com/fear-and-paranoia-created-in-the-crucible-essay 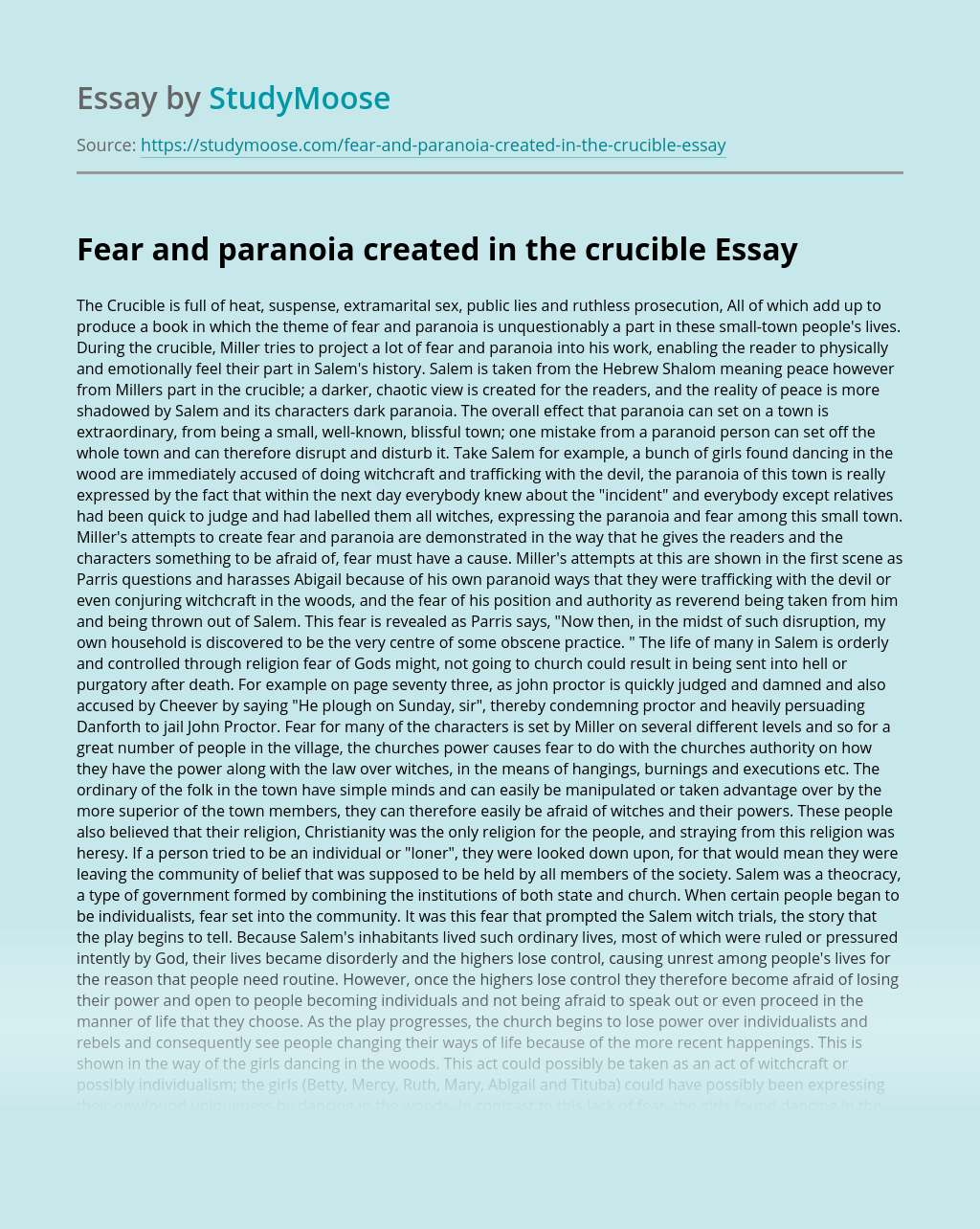