A controversial debate that has existed for many years, and will probably still be argued for many years to come, is the relatively close relationship that fashion and Art has. People in both the fashion and art industries (or as some artists like to call: ‘art world’) have very mixed opinions and ideas on the collaboration of fashion and art and how one may influence the other in the industry we live in today.

“Art is Art and Fashion is an industry”, as quoted from in Michael Boodro’s ‘Art and Fashion’ (2007), he believes that Fashion is just a ‘man made’ craze that has only been popularised by the many followers in public that are cloned to consume the ideas of fashion.

Turn in your highest-quality paper
Get a qualified writer to help you with
“ Fashion and Art ”
Get high-quality paper
NEW! AI matching with writer

Boodro also believes that “… fashion comes with no illusions attached” He believes that there isn’t a depth to fashion as there is in art, he believes art is an academia with vast depths of knowledge involved as to fashion, which is a shallow and very monochrome in it’s appearance, with no hidden messages.

He goes on to explain that the interest in fashions first started in the late 1800s/early 1900s when only the rich and wealthy could afford artwork, in a form of portraits, then these painters created elaborate fashions in this paintings, learning the art of drapery and how to portray fabrics in the best possible light, For example: “Gustav Klimt, portraits of women, ‘designed’ dresses that were more prominent than his subjects”.

Following on from this, Boodro then goes on to highlight some interesting links between art and fashion in how the artists has always formed the inspiration for the designer, such as: “Valentino has taken black and white geometric motifs from the Viennese artists Josef Hoffman and Koloman Mosen and embroided them in sequins and dresses” Many other examples there to highlight that a key to a designers success is by taking inspiration from previous art work by innovative and creative artists, which supports Boodro’s opinion that fashion is a follower and a form of art.

“Clothes were placed in an extra-artistic sphere- where the most part they have remained”. This is taken from a contrasting piece of writing from ‘Fashion and Art’ by L. Svendsen (2006). As you can see, the Title ‘Fashion and Art’ is a reverse to Boodro’s ‘Art and fashion’, this is because, as quoted above, Clothes (fashion) were placed in an ‘extra-artistic sphere’, meaning that he sees Fashion as a seperate category to Art, and not a branched off form of art itself.

Svendsen has a much more equal opinion for both sides of the opinion, he can pick out where Art and Fashion do merge into one, and also how Fashion has separated itself from art. He stated that in the early 1900’s, Fashion was very limited and boundaries were strict due to “Freedom was rather restricted, as the creations had to appeal to the aesthetic preferences of the customer”.

Even though artists and art critics will strongly disagree that Fashion is a form of Art, even iconic designers such as Paul Poiret, one of the first iconic fashion designers of the early 20th Century stated “I am an artist, not a dressmaker”, designers hated how critics would limit their title to just a ‘dressmaker’, limiting their skills and talents instead of creative s that they dream to be acclaimed for.

Another controversial quote though from a famous designer, Martin Margiela who insists that “fashion is a craft, not art” Moving into the 1920s and 30s with the Cubism perception in artwork replacing realism, Fashion also in turn started to become more abstarct, and this was when Haute Couture was born, designs became more elaborate and the previous boundaries that existed were lifted, giving designers a vast playground in which they could experience with their work and ideas.

“Many Fashion Designers have used strategies normally associated with contemporary art rather than the world of fashion, by creating clothes that are better suited to exhibitions in galleries and museums than for actual wear”This shows a great link between fashion and art, it was evolving to become so abstract and outrageous that the best way for them to be displayed to their best potential was in galleries and museums, the same way as artwork would be, For example now in Museums such as the Victoria and Albert in London, there is now Fashion Archives, and many international designers have homed themselves there for one-off elaborate exhibitions.

To conclude I think that I would categorise Fashion as a form of art, but not a direct result of art, I think many people have similar opinions of the two because they are such broad topics with an almost unlimited amount of space for creativity. I do agree that some of fashions many successful collections and campaigns stemmed from the innovative ideas of previous artists but some of the more successful fashion moments have been solely down to the creative minds of the designer If I had to categorize the fashion industry and the Designers work, I would place it under craftsmanship and creativity, as previously quoted by Martin Margiela. To finalise though I believe that art and fashion shouldn’t be labelled and the two should be able to intertwine to create magical and awe-inspiring pieces.

Fashion and Art. (2017, May 31). Retrieved from https://studymoose.com/fashion-and-art-essay 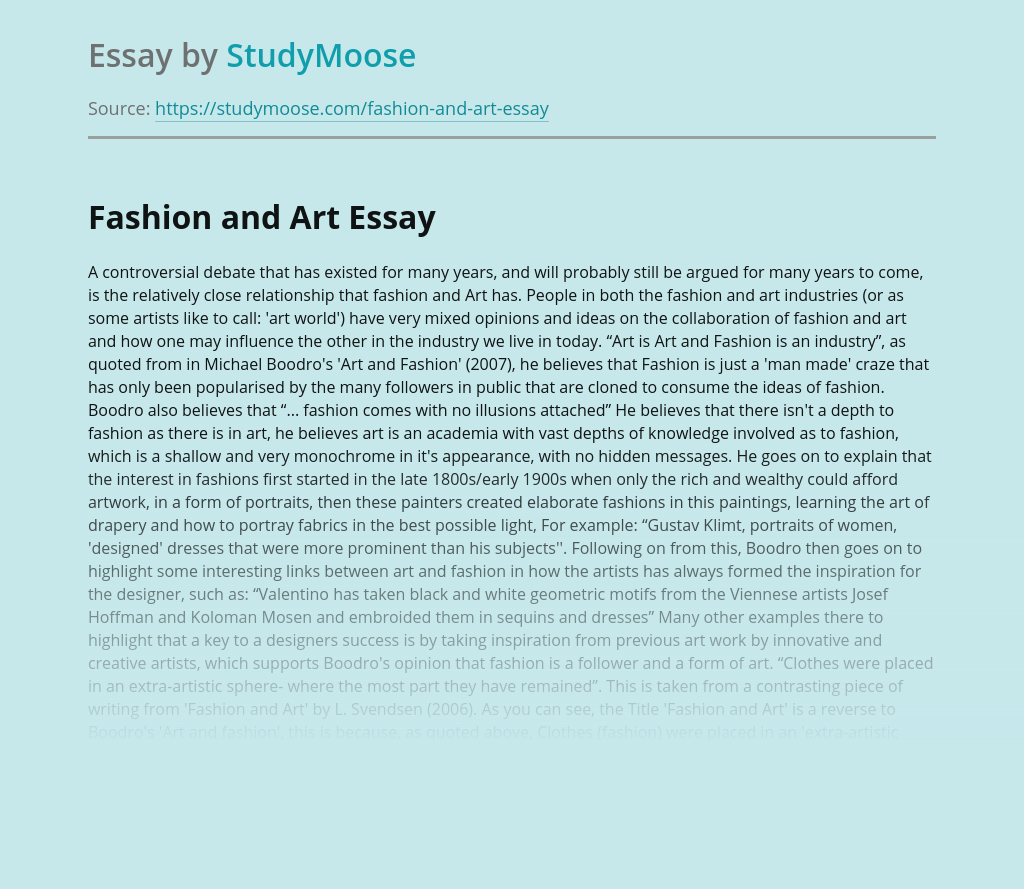 Turn in your highest-quality paper
Get a qualified writer to help you with
“ Fashion and Art ”
Get high-quality paper
Helping students since 2015
Stay Safe, Stay Original