Fahrenheit 451 gives us a glimpse into a future where people are surrounded with instant gratification and constant entertainment. This is a future where books have become insignificant to their lifestyles and treated with disrespect. In Fahrenheit 451, we are introduced to a firefighter whose job is to rid his society of the ideals that books represent by burning them. Society feels threatened by the division between groups of people that results from reading books and sharing the ideals within them. I think that this book is really good and I believe that by the end of the story, Guy Montag has a change of heart and stands up for his beliefs.

Don't use plagiarized sources. Get your custom essay on
“ “Fahrenheit 451” Compared to Modern Day Society ”
Get custom paper
NEW! smart matching with writer

Guy Montag burns books and houses because he doesn’t really question his job. He grew up in a time where no one reads books anymore. Montag states, “We must all be alike. Not everyone born free and equal,as the Constitution says, but everyone made equal. Each man the image of every other; then all are happy, for there are no mountains to make them cower, to judge themselves against (Bradbury 58).

” People in the future believe that books were always offending someone, even though this was not the authors of the books intentions. The authors were forced to water down the books and make them all the same. This lead to no one reading them, and they lost importance. Eventually they were all banned. In the story, Montag meets a 17-year-old girl named Clarisse, who shows Montag the importance of life along with all the beauty, elegance, and potential it has.

Clarisse is basically an outcast to society due to her odd habits, which include hiking, playing outside, and picking flowers. Later Clarisse is hit by a car street racing and dies. Montag is deeply saddened and starts to steal books so he can later read them to try and keep her memory alive.

Fahrenheit 451 can be compared to modern day society through the censorship of individuals ideas and belief. Today, people get offended so easily that the media and/or news has to censor things that they feel will upset people. Libraries are getting closed down and books are treated with disrespect and thrown away. Kids spend their free time playing video games and are constantly on social media allowing their “friends” to tell them how to think and feel. Like the people in the story, individual thinking is looked down on and people are afraid to stand up for what they believe in and instead go with the flow or what the majority of society believes.

The death of Clarisse and Montag’s new-found interest in reading makes it to where he has to lie to his wife, friends, and even co-workers so he won’t get into trouble. In this day and age no one reads, everyone watches television on big flat screen tv’s and they (the people) are always on social media and listening to the radio. One day when Montag’s wife “Mildred” invites over her friend “Mrs. Phelps” to watch some tv. Mrs. Phelps says something that angers Guy Montag and Montag takes out a book and reads her a poem, she breaks down in tears because she can hear the emotion in his voice and how somber he is. after this happens, Mildred, Guy Montag’s wife snitches to Captain Beatty (Captain Beatty is pretty much guy Montag’s boss and he tells him what to do and he has a lot of knowledge about books and he can even recite a few lines from books. And yet he still has a very strong hate against the books.) Captain Beatty tells Guy to burn down his house and everything within it. Guy no longer feels that books and houses that hold them should be burned because books helped him to understand Clarisse and see things from another perspective. in protest of what Beatty was demanding him to do, Montag turns the flamethrower on Beatty and lights him on fire.

All in all, this was a really good book. There was a lot of valid points and meaning behind things. And it makes us realize that without books we are pretty much like zombies and all the same. We wouldn’t learn anything and we wouldn’t know about history. Author Gauthum Shenoy (2016) states that “According to Bradbury, Fahrenheit 451 is not about censorship but about technology — more specifically, about the role of mindless television on society; the new opiate of the masses. Through the book, Bradbury wanted to show people that mindless, endless television was not a substitute for literature and reading. I agree that instant gratification and the advances in technology play a large role in why our society has become so mindless and determined to make us all feel like we are the same, but I believe that we will never be able to please everybody. There are 7.7 billion people on earth and it would be nearly impossible to not offend anyone who reads “that certain book” and develops ideas that are in contrast with others or that bring out strong emotions when spoken out loud. 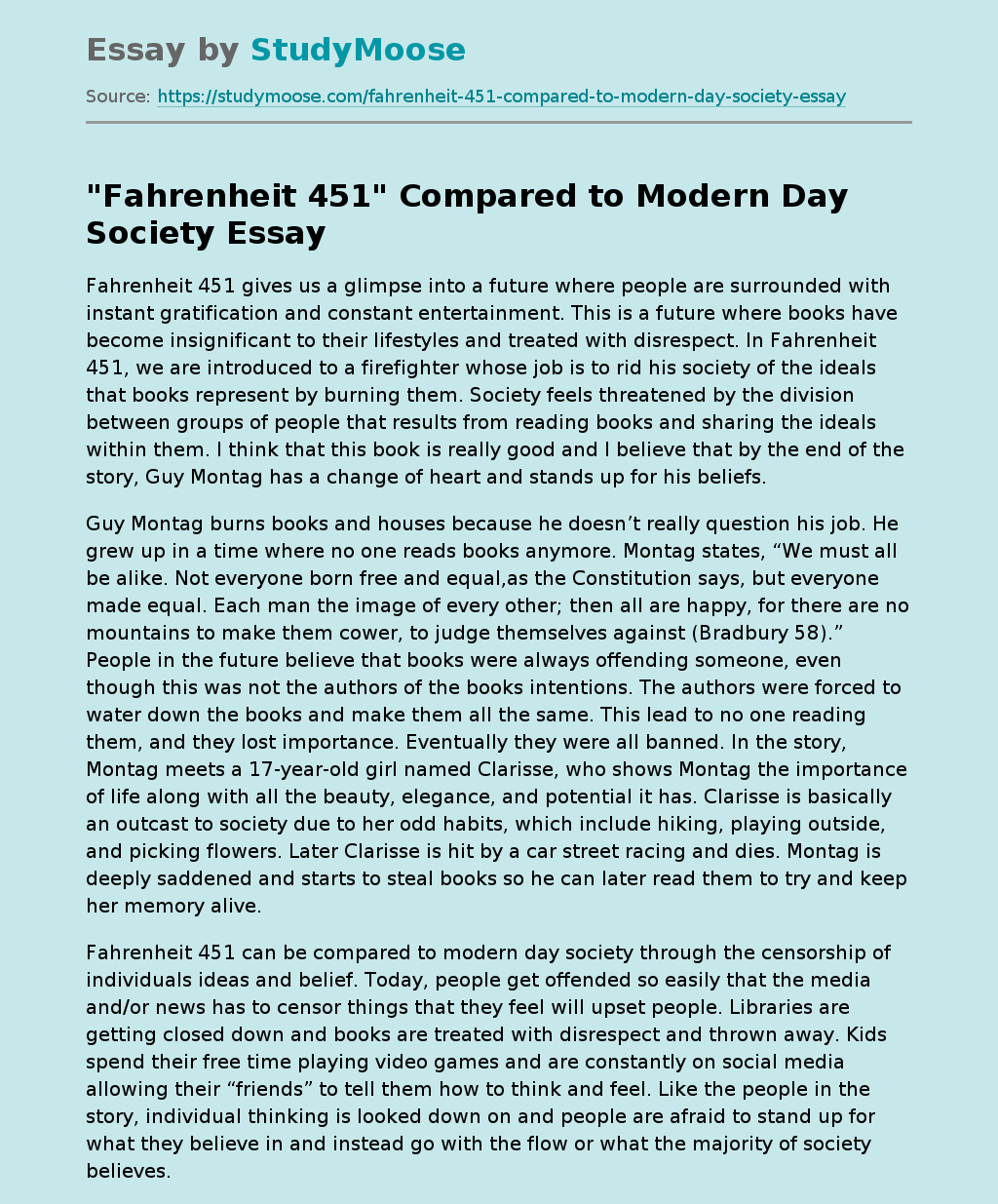