Don't use plagiarized sources. Get your custom essay on
“ Factors Affecting the Rate of Enzyme Activity ”
Get custom paper
NEW! smart matching with writer

Then the units changed to mm/h. Rate is distance over time and it means how fast something occurs in a given time period. The enzyme peroxidase in two forms of potato peroxidase and liver peroxidase has been settled in two different situations, (different PHs: 3,7,11), (different temperature: cold, warm and hot) and in other experiment mixes with three different substrates: (water, H2O2, glucose solution). The data collected during the experiment make discussion about hypothesizes.

In other point of view, among proposal substrates in this experiment such as water, glucose solution and H2O2, hydrogen peroxide increases the concentration of O2 and H2O (result of transforming of hydrogen peroxide) when it places next to peroxidase liver rather than when it places next to peroxidase potato. Therefore, when concentration increases, the intensity of reaction increase. The data also showed the same results. Adding 3ml of H2O2 to the potato peroxide gave 41 mm of foam height and the enzyme rate was 2460 mm/h. Adding 3ml of H2O2 to liver peroxidase gave 151 mm foam height and 9060 mm/h as enzyme rate. When water and glucose solution added to peroxidase in liver and potato, any reaction happened so, no bubbles created. The hypothesis has been approved in first experiment. *

The first part of the hypothesis failed because based on the hypothesis it supposed to be seen more activity in potato enzyme at 35 C rather than 5 C, but it did not happen. It can be guessed that Potato lives under the ground where there is not enough sunlight and as a result it is colder than surface of the ground and potato enzymes are active in low temperature and it will lose its activity when the temperature be higher. But, the experiment about the liver peroxidase approved the hypothesis. Liver had wow reaction at 6 C as cold temp and at 33 C as warm temp too. And it had no activity at 64 C at all. As it is an enzyme found in the body, the optimum temperature would usually be body temperature around 37 C then, high activity of liver peroxidase at 33 C is expectable. But, high activity at 6 C is unusual.

Maybe an error occurred during the experiment such as not reading the temperature correctly or the room temperature (which is optimal) effects on the reaction during the experiment or maybe the time reader made mistake in setting time. However, the 64 C is absolutely not optimal because the structure of enzyme and its active site has been destroyed in high temperature. Regarding to the second part of the hypothesis, 9060 mm/H rate of enzyme activity in liver peroxidase at 6 and 33 degree of Celsius showed more activity in compare to 2100 mm/H and 1980 mm/H of potato peroxidase at 5 and 35 degree of Celsius. So second part of hypothesis has been approved.

The effect of PH on peroxidase activity hypothesis:

Liver also has an optimal range and does not work out of that range. In this experiment the expectation was high activity around PH 7, which is close to the PH of body, 7.5, But 882 mm/H rate of activity in PH11 was the most active situation. Also 842 mm/H in PH7 was more than 828 mm/H in PH3. Then liver peroxidase activity increased by increasing PH level and it means that Hypothesis has been failed. PH11>PH7>PH3 Regarding to the data collected by the class some of the hypotheses have been approved and the others have been failed. Data table for confirmation of substrate for peroxidase showed that in both cases, potato and liver, H2O2 was the best substrate among water and glucose and hydrogen peroxide. Also the enzyme activity of liver (9019 mm/H) was more than enzyme activity of potato (2245 mm/H). The difference was so obvious in the graph.

The situation and condition were not the same for all groups. For example there were no specific definition for the words “ cold, warm or hot”. Any group may measured the height of the bubbles in any temperature as cold or warm or hot. There may even be errors in inserting the data in the table online. Because some of the data is totally out of range and out of suggestion. However, PH, temperature and even the substrate effect on enzymes activity. An enzyme has special active site and special substrate can be attached to it. The optimal range is important in enzyme activity. The enzyme is less active when it gets under or above the level of optimal range. And it is true about both PH and temperature.

In our real life we come across with many situations that can effect on the enzymes whether inside or out of our body. For example in the human digestive tract, there are enzymes operating at basic pH (mouth and intestine) and highly acidic pH (stomach). If the acidity of the stomach highly increases the enzymes are not able to work any more. Or, some people have some problem to digest dairy because of enzyme deficiency. Or, if a child has fever the enzymes of his/her body won’t be able to work any more and it causes vomiting. 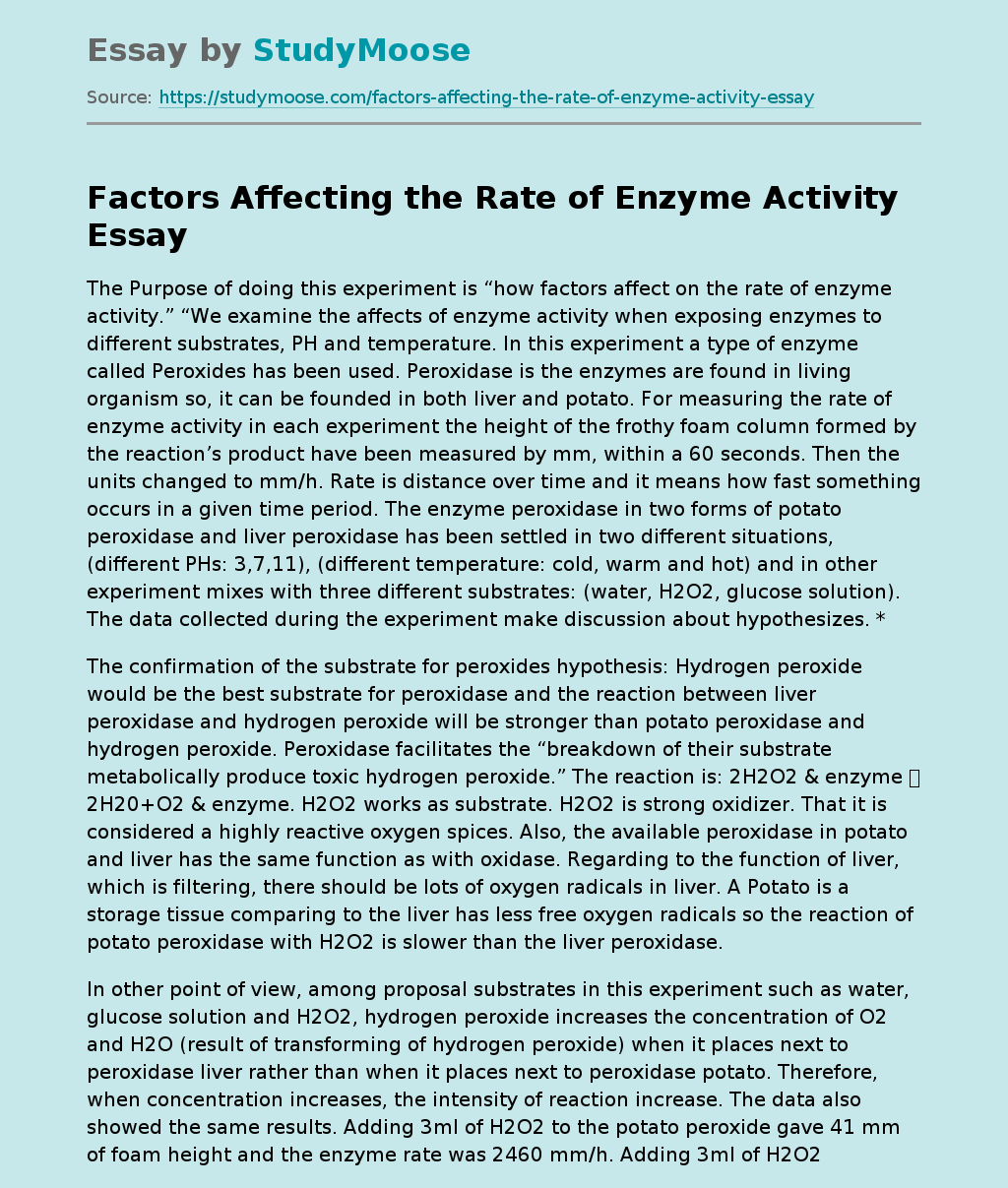