In the field of microbiology, being able to effectively identity bacteria from a given sample is indeed of vital importance. To further expound, in relation to medical applications, the identification of bacteria from clinical samples is essential in order to determine whether the treatment being given or to be given for an infection would indeed be effective (Crowley, 2010). In relation to this, if the pathogenic bacteria have not been appropriately identified then it would be logical to assume that the disease would not be effectively treated let alone the possibility of further worsening the patient’s health.

Don't use plagiarized sources. Get your custom essay on
“ Experiment for Identification of Two Unknown Bacteria ”
Get custom paper
NEW! smart matching with writer

Furthermore, if antibiotics are mistakenly administered due to errors in identification, then it would be possible that resistance might be developed as one of the most undesirable effects (Crowley, 2010). Therefore, it is not difficult to realize that gaining the knowledge as well as the basic capability to uncover the identity of unknown bacteria, as accomplished throughout this exercise, is without doubt an important pursuit associated with a myriad of substantial applications especially in the field of healthcare.

Methods Two unknown bacterial samples, respectively labeled as Unknown 1 and 3, have been identified through the use of sequential steps ranging from staining procedures to tests for metabolic capabilities. In particular, the exercise has been completed throughout a span of seven weeks. The initial step, accomplished during the first week, was to isolate pure cultures from both unknown samples. Such a step was important in order to obtain colonies for use in the next procedures as well as to characterize the morphological aspects of the samples’ culture.

During the second and third week of the experiment or exercise, gram staining was done after having successfully observed the pure cultures of each unknown sample. Of course, gram staining is an important step in the process of identification as it determines whether a given sample is either gram positive or gram negative, hence limiting the possible identities of the bacteria (Crowley, 2010).

Afterwards, in the two weeks that followed, selective/differential media have been utilized, wherein each unknown have been inoculated in. In particular, media such as Mannitol Salt Agar (MSA), Phenylethyl Alcohol Agar (PEA), Blood Agar, Starch Agar, DNase with Methyl Green Agar, Eosin Methylene Blue (EMB) Agar, Endo Agar, MacConkey Agar, and Deoxycholate (DOC) Agar. Subsequently, after having observed the growth of the unknown samples in the aforesaid media, additional tests have been done.

The metabolic tests, which were done throughout the final two weeks of the exercise, include Methyl Red and Voges-Proskauer (VP), Phenylalanine Deaminase (PD), Sulfide Indole Motility (SIM), Citrate, Catalase, Phenol Red Sugar, Urease, as well as Triple Sugar Iron (TSI). The use of the media and tests delineated above is vital in determining the identity of the samples. Bergey’s Manual of Determinative Bacteriology requires the information derived from such, so as to characterize the sample and narrow down the possible choices. Of course, the use of the aforesaid book in such a manner would be the final phase of identification.

Assuming that the most if not all results gained from the differential/selective media as well as metabolic tests are indeed accurate, then it would be appropriate to assume that the identity of the unknown samples gained through the use of Bergey’s Manual of Determinative Bacteriology would be accurate and reliable as well. As a side note, it would be ideal to highlight the fact that not all possible bacteria have been considered in the identification of the unknowns since it has been indicated that the provided list in the laboratory manual contains the potential the identities.

Results In order to present the information gained throughout the aforesaid steps, two tables have been created one for each unknown bacteria being tested and identified. Of course, this would be an essential step in providing a clear means of evaluating the main results of the exercise, and have allowed for an efficient means of cross-checking with the Bergey’s Manual of Determinative Bacteriology. Table 1 below delineates the main results gained regarding Unknown 1.

Aside from being determined to be a gram negative, it has been established that subjecting Unknown 1 to tests or means of differentiation such as PEA, Hemolysis, Urease Hydrolysis, Mannitol, DNA Hydrolysis, MR, and Catalase all results in a positive. In contrast, negative results have been achieved from Amylase, VP, PD, H2S, and Citrate. Without doubt, it is also important to highlight an important insight gained through microscopy. Specifically, it has been determined that Unknown 1 is cocci. 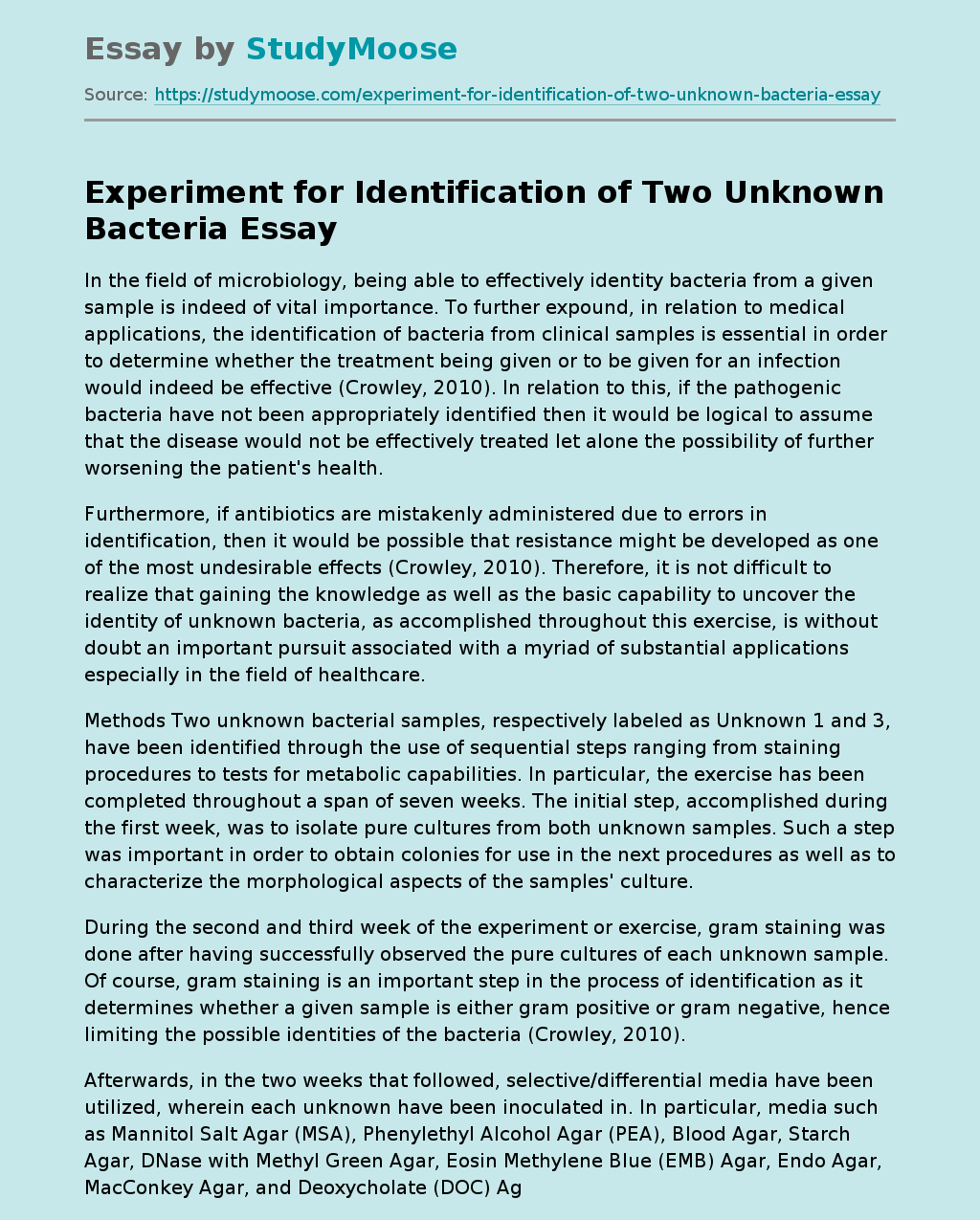