Existentialism is defined as a modern philosophical movement stressing the importance of one’s experience and accountability. Its focus is the make on the personal reflections that these make on the individual, who is seen as a free agent in a deterministic and seemingly meaningless universe. Its philosophy is meticulous that, in a nutshell, advocates a diverse arsenal of responses and solutions to the ‘existentialist attitude’; which, essentially, is what an individual feels when confronted by the absurdity of life. Throughout humanity, rumination and self-proclaimed ‘ultimate’ truths have assumed various forms: poetry, religion, and numerous other doctrines and textual works.

Don't use plagiarized sources. Get your custom essay on
“ Existentialism and Metamorphosis ”
Get custom paper
NEW! smart matching with writer

In The Metamorphosis, Franz Kafka narrates the ramifications of a metamorphosis in which the subject and protagonist, a man named Gregor Samsa, is transformed into a bug. Despite the novella’s literary methods and influences, the most prominent being the way Kafka so nonchalantly describes such irregularity in his life, The Metamorphosis is also hailed as a prime textual work of existentialism, the previously mentioned philosophical movement.

Both prior and subsequent to the transformation, Kafka portrays Gregor as a man who seems lost within himself, and lacking identity. The reminiscences of his past are neither nostalgic nor poignant: his human life is seen to revolve solely around trivial matters. His social life pays the price from this, his failure to assert a concrete and consistent existence. The extent of his lack of individuality is further exemplified by his reaction to the metamorphosis: finding himself “transformed in his bed into a gigantic insect” (Kafka, 296), he prioritizes work over all else, even in his newly equated insect form.

Furthermore, he panics because “the next train went at seven o’clock; to catch that he would need to hurry like mad and his samples weren’t even packed up” (297). Gregor’s identity crisis is a device for conveying Kafka’s belief of an impersonal society where individualism is drastically mitigated as a result of excessive materialism. Gregor, in the context of Fyodor Dostoyevsky’s Notes from Underground analogy, would be the ‘ant’ in the anthill— thus rendering his metamorphosis ironically. Another dominant theme prevalent throughout the novella is the absurd situation Gregor is confronted by. These nonsensical happenings (296-327) reflect the world as seen from the existentialist perspective: a world absent of a rational and comprehensive objective. Jean-Paul Sartre postulated that ‘every existing thing is born without reason, prolongs itself out of weakness, and dies by chance’.

This meaninglessness is precisely what Gregor is victim to in the microcosm of society that Kafka generates: Gregor flounders about, beleaguered by absurdity and helplessness, presumably because he is unaware of Nietzsche and Kierkegaard’s somewhat consoling conclusions that one must devise meaning for one’s own existence ex nihilo. Once again, Kafka utilizes a combination of plot and character to convey his angst concerning an apparently pointless existence. Freedom— or rather the lack thereof— is another existentialist tenet that Kafka addresses. Gregor is depicted as someone constrained by self-imposed burdens, the most demanding being the role as the financial pillar of the family. Despite having the freedom to repudiate this role, Gregor instead pursues it with feverish ardor to the extent that it becomes his ‘sole desire’ (310).

Yet his harangue regarding his career (297-298) reveals that this is not due to personal desire, but rather the belief that he must replace his father financially, regardless of preference. Gregor’s delusion regarding an absence of choice contradicts what Kafka perceives as the truth: that freedom is ubiquitous in spite of any ethical obligations we may be expected to adhere to, and that the individual defines his or herself via one’s decisions. A quasi-motto of existentialism coined by Sartre, ‘existence precedes essence’. In conclusion, Kafka employs the fictional literary elements he constructs to address the very non-fictional, existentialist aspects of society and life. Akin to Dostoyevsky’s Notes from Underground, it can be interpreted as both a rumination and tirade against impersonal communities, restriction of freedom, and the absurdity of life. 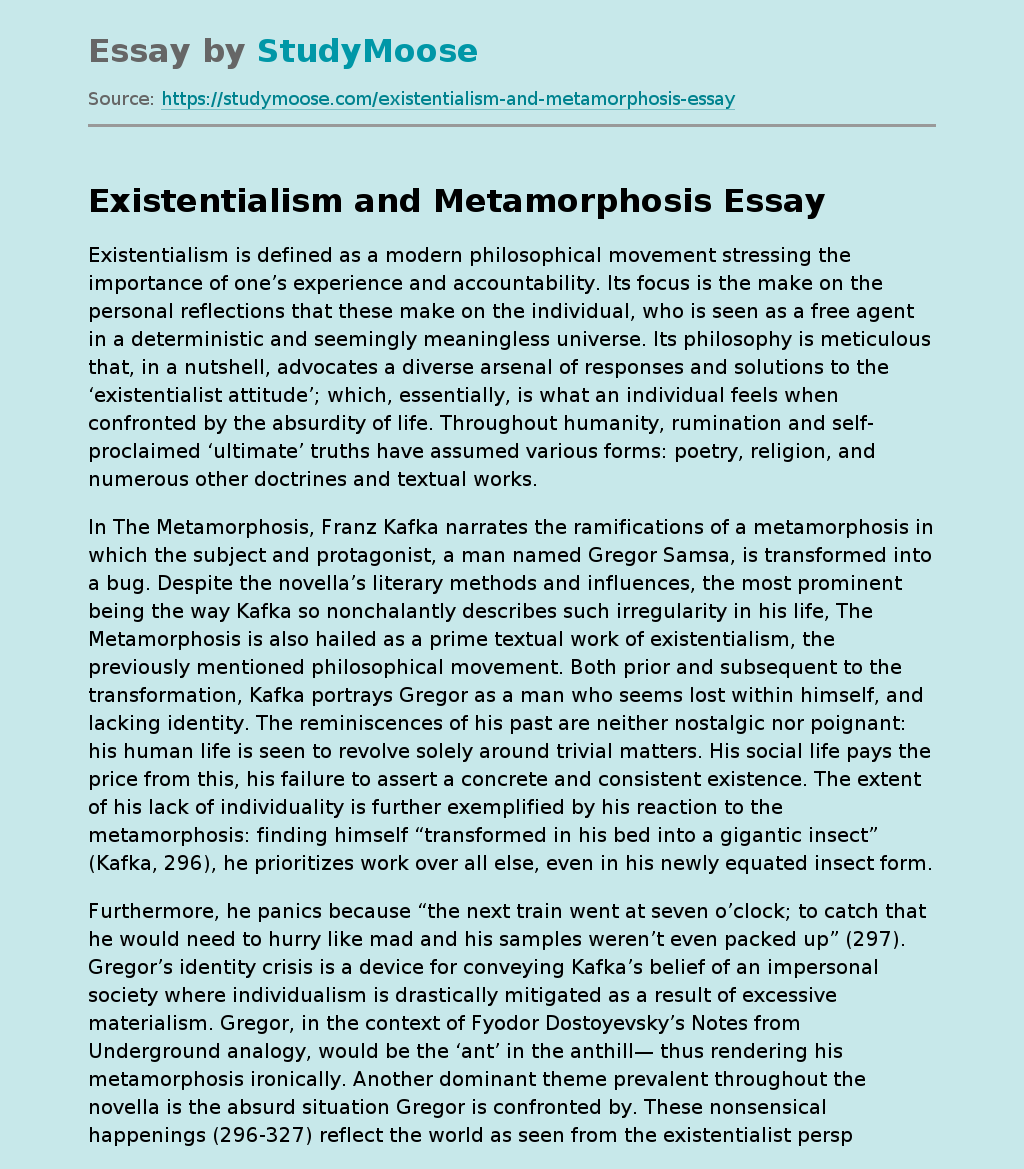