Don't use plagiarized sources. Get your custom essay on
“ Examining Christian Symbolism in “A White Heron” ”
Get custom paper
NEW! smart matching with writer

The short story takes its reader through the short exploration that the main character, Sylvia, goes through when she is faced with making a decision that may lead to the end of a beautiful bird’s life. Many critics have analyzed and debated the many symbols contained within the story. Victoria Freivogel, an English teacher from Louisiana, wrote an essay which examines what she considers the symbolism to be in “A White Heron”. In her essay she goes against other critics who claim “the ornithologist, pine tree, and white heron are symbolic of Sylvia’s burgeoning sexuality” (Freivogel 136). In fact she states, “they are, in fact, symbols of Christianity” (Freivogel 136). Innocence in “The White Heron” is a theme that I, as a reader, have recognized each time I have read the story. Reading Freivogel’s essay and learning about other critic’s views can be a little unsettling when the reader has only viewed the story as an innocent journey of a young girl who decides to protect nature, as well as her own conscious.

Proficient in: A White Heron

In reality, the hunt is simply for the bird and innocence remains prominent, which is shown when Jewett writes that Sylvia, “could not understand why he killed the very birds he seemed to like so much” (Jewett 67). A clear symbol in “A White Heron” is the hunter who symbolizes an enemy; the enemy against nature and and the enemy against Sylvia possibly going against her better judgment. Freivogel considers the symbol of an enemy to be symbolic of Satan. Other critics also view the enemy as Satan. Freivogel points out that the hunter from first appearances, “is charming, sly, and observant of Sylvia’s weakness” (Freivogel 138). These qualities are said to be the same of Satan in the Garden of Eden, and the hunter is preying on Sylvia, as Satan preyed on Eve.

However, he is preying on her weakness in order for him to have the satisfaction of hunting down the white heron, not preying on her in a sexual manner. Another inept image that some critics maintain is that the pine tree that Sylvia climbs is “sexually symbolic” (Freivogel 138).  The passage, “The tree seemed to lengthen itself out as she went up, and to reach farther and farther upward” (Jewett 69), Richard Benzo wrote that “there is a sexual relationship indicated by this passage” and that “Sylvia I somehow trying to overcome a fear of sexual relations” (qtd. in Freivogel 138). This sexual claim about the pine tree is said to be “too obvious, and facile” by Freivogel. These critics who maintain that this story has a sexual theme do not see innocence involved in this story at all. The tree is actually a Christian symbol that reminds believers to “seek out heavenly treasures, rather than earthly treasures” (qtd. in Freivogel 139), and this is what Sylvia does by choosing to not let the hunter know where to find the white heron. Lastly, the white heron is also seen as a symbol of sexuality by other critics.

Freivogel writes that another critic, Elizabeth Ammons, argues that the heron is symbolic “of Sylvia’s body that she must offer up as ‘prey’ to the ornithologist in exchange for ‘money, social approval, and affection” (qtd. In Freivogel 140). In reality Jewett wrote nothing to indicate that the hunter was trying to “prey” on Sylvia in a sexual way. However, he was preying on her innocence by tempting her with a money reward for informing him of the white heron’s location. Freivogel rebukes these critic’s viewpoints on the heron being sexually symbolic. She even goes so far to say, “the idea of the heron as a sexual symbol seems the most far-fetched” (Freivogel 140). Birds are symbolic in the Christian church. They are said to be “symbolic of Christ” and “images of the eternal struggle of good and evil and of Christ’s battle against the devil” (qtd. in Freivogel 140).

Sylvia encompasses all of these throughout her journey to find the heron, and into her decision to keep its location a secret. Many critics base their analyses on “A White Heron” on sexual nuances as the symbolism of the story. Freivogel affirms that it is a story “filled with symbols that are common to Christian beliefs” (Freivogel 141). Sylvia has overcome the temptations offered to her by the hunter or “satan”, and reached the top of the pine tree where she realizes the true treasures come from the heavens, and she could not betray that for “earthly treasures” brought by the money. Ultimately, Sylvia won the battle of good versus evil. Victoria Freivogel’s views on symbolism capture the true essence of the story, which I believe to be pure innocence. Christian symbolism throughout the story cements the purity of nature and even of the young Sylvia.

Sylvia is only a nine year old girl. Many of her views will be highly influenced by others, but she has the purest mind and heart, and she listened to the voices of nature, as well as her inner conscience when deciding that she could not tell the whereabouts of the white heron. I find the sexual symbolism believed by other critics to be senseless. Those impure views take away the purity of the theme, and it completely changes the meaning of the story. I will always read “The White Heron” as a story of a young girl who shows remarkable fearlessness in her journey to find the heron and in her journey she discovers how precious all life truly is. . 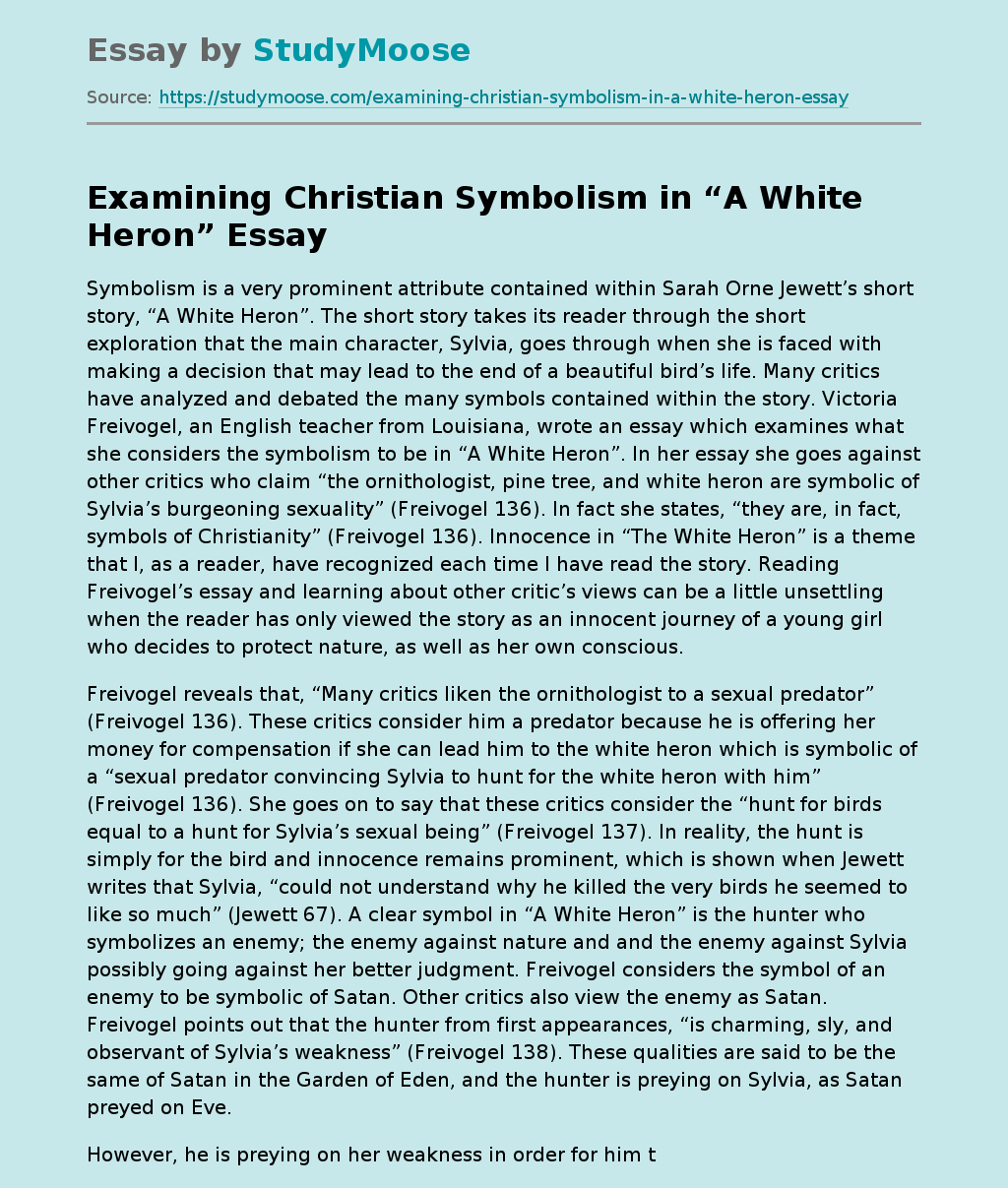