According to Murray (2017), an ethical dilemma occurs when “obligations, principles, rights, values, and beliefs are in conflict” (p. 73). They arise when the only choices available are undesirable (Murray, 2017, p. 73). With outcomes of patient demise with either choice, physician assisted suicide (PAS) clearly meets the criteria of an ethical dilemma.

Euthanasia has a long history around the world as well as the United States. The first set of ethical standards that were established to guide the practice of medicine was in 400 BC at the School of Hippocrates.

These ethical standards are found in what is known as the Hippocratic Oath. This oath, held by physicians, guides them to treat the patient to the best of their ability while maintaining the privacy of the patient and promising to teach younger generations the knowledge of medicine.

In the 1900s, the “right to death” was a topic of discussion throughout Europe. “In 1920, in Germany, home of the most scientifically advanced medical community in Europe, a booklet titled Permitting the Destruction of Unworthy Life was published” (Vizcarrondo, 2017, p.

1). This booklet brought to light the ideation that it should be legal to kill people that were deemed unworthy of living. In Germany, after this booklet was published, physicians and nurses legally practiced the organized killing of human beings.

There are requirements for PAS laws. The requirements include that eligible patients must be 18 years of age or older and have a terminal illness, with a death prognosis of six months or less. In regards to the physician, they must have an active license in the state and must inform the patient of all possible options. The last requirement of the PAS laws deals with timing. There must be an “Initial verbal request, followed by a 15-day waiting period. There must then be a second verbal request to the physician, followed by a written request. Finally, there must be a 48-hour waiting period before the patient can pick up the medications from a participating pharmacy” (Sullivan, 2018, p. 50). These requirements are important to the PAS laws because they establish criteria for who may receive and who may administer this procedure. With such a highly debated ethical topic such as PAS, clear guidelines are necessary to help prevent misuse of this procedure.

In nursing there are eight ethical principles that nurses must practice including autonomy, beneficence, nonmaleficence, justice, fidelity, veracity, privacy, and confidentiality (Murray, 2017). So, how does a nurse juggle their ethical responsibilities and their own personal beliefs when it comes to PAS? The ethical principles which relate most to PAS are autonomy, beneficence, and nonmaleficence. Each of these principles have specific factors which can lead to significant moral distress in nurses and can have weighing effects on the patients as well as the patient’s family and friends.

Autonomy is defined as “self-governance, in that an individual is free to make choices about what can be done to his or her body” (Murray, 2017, p. 65). This ethical principle is one which can be very challenging in the context of PAS. From a nursing standpoint the nurse should always advocate for their patient as far as what the patient wants and what is best for that patient. In situations such as this, the nurse may be experiencing significant moral distress related to his or her own beliefs regarding PAS. Furthermore, “as a person’s death approaches, dilemmas around quality of life and wanting to proactively end life can be complicated and distressing for all concerned” (Costello, 2014, p. 55). Therefore you cannot just look at the nurse’s feelings of the situation, you must also consider the patient as well as their friends and family.

The patient may want to end their life, but they also may want to be there to comfort their friends and family throughout the end of their life. On the other hand, the patient’s family and friends may wish for the patient’s suffering to end but are not prepared or ready for their loved one to die. In reality, the patient should have full autonomy over choices regarding their care; however, in most states in the U.S. it is illegal to provide PAS. This means that patients typically do not have this option whether it is within their wishes for end-of-life care or not, which ultimately limits their autonomy.

“Beneficence is a core principle of patient advocacy and refers to any action intended to benefit another” (Murray, 2017, p. 66). When referring to beneficence arguments can be made regarding PAS as to whether or not it supports this ethical principle. According to Kiger (2015), “if the patient has no hope of recovery and might spend further weeks or months in discomfort, living a life devoid of value, ending that life would be an act of kindness”, which would essentially an act of beneficence (p. 4). Another point of view would be that if the patient wishes to participate in PAS, but they have a chance of recovery or their condition is not one with debilitating factors that may significantly decrease their quality of life, then providing PAS would defy the ethical principle of beneficence.

Nonmaleficence is “the moral obligation to do no harm or injury to another person” (Murray, 2017, p. 66). If a patient is constantly in significant pain, has a remarkably decreased quality of life, and has no hope of recovery then ending that life “would prevent needless pain and suffering” (Kiger, 2015, p. 4). In other words, it would be an act of nonmaleficence and would be considered ethical. From another perspective, the patient may have a chance of recovery with the hope of decreasing their pain and increasing their quality of life. In this scenario it would be considered a breach of nonmaleficence to allow or advocate for PAS. In doing so the nurse is advocating for the patient to die without good reason; therefore, causing harm to the patient.

When a nurse decides whether or not to take an ethical stand for or against PAS many are set in their beliefs and firm in where they stand. Through this study, the platform reached was divided evenly down the middle, which is reflected in the research and in surveys reviewed. Each opinion was formed and framed based on individual experiences and beliefs. When faced with an ethical dilemma such as PAS, each nurse should reflect upon their own beliefs and know where they stand morally and ethically. There is no specific right or wrong, and nurses may differ in their opinion with each situation they encounter.

The American Nursing Association (ANA) Code of Ethics was developed more than 65 years ago, with many provisions being made over time, yet the principles remain the same. Ethical code 1.4 Right to Self-Determination is described as, “Nurses should provide interventions to relieve pain and other symptoms in the dying patient consistent with palliative care practice standards and may not act with the sole intent to end life” (Code of Ethics, 2015, p. 3). Respecting patient autonomy is to respect a patient’s right to self-determination (Murray, 2017). Patients can make choices to what extent of care or life sustaining treatment they want to receive, and as previously stated there are states in which a patient with a terminal illness can decide to end their life. PAS is illegal in the majority of our country, and the ANA states that, “nurses are strictly prohibited from participating in PAS” (Pedersen & Tariman, 2017, p. 25). Where is the line drawn in deciding how far a nurse can go to respect a patients’ autonomy?

Concerning beneficence and “adhering to the duty to do good,” nurses must uphold and constantly advocate for a patient’s needs and wishes (Murray, 2017, p. 65). Nurses working in areas such as hospice, critical care, or oncology are often faced with patients who are suffering from unrelieved pain, and many request help with ending their suffering. This leaves nurses in an ethical predicament; does one allow their patient with stage four terminal esophageal cancer who has requested death with dignity to suffer from pain and starvation or does the nurse empower the patient by advocating for their request. To determine a nursing standpoint on such dilemmas, 539 nurses in Nevada were given an end-of-life survey. Out of those nurses surveyed, 53% “expressed support of PAS, including death with dignity” (Pedersen & Tariman, 2017, p. 35).

The ANA stands against PAS, yet “the nurse may administer pain medication that may potentially hasten the patient’s death based on the principle of double effect, which is defined as the justification of claims that a single act having two unforeseen effects, one good and one harmful, such as death, is not always morally prohibited if the harmful effect is not intended” (Pedersen & Tariman, 2017, p. 26). This seemingly contradicts the ethical principle of nonmaleficence. Even though a harmful effect was not intended, how can the principle of double effect be ethically justified? Yet, nurses who participate in PAS can still face criticism. In San Francisco, out of “24 different health care facilities serving AIDS patients, 54% supported PAS for its ability to relieve suffering” (Pedersen & Tariman, 2017, p. 35). While many nurses are supportive of PAS for “their strong beliefs in patients’ dignity and autonomy,” those who are unsupportive cite that “personal ethics, religion, and the potential for abuse of PAS,” defines their moral disapproval of PAS (Pedersen & Tariman, 2017, p. 36).

When questions of moral “rightness” or “wrongness” underlie a nurse’s decision making and care of patients in a beneficent manner, ethical issues will arise (Stanhope & Lancaster, 2017, p. 51). These ethical issues grow into dilemmas when there are justifiable reasons for either option (Stanhope & Lancaster, 2017, p. 51). It is clear that there are arguments for and against PAS, with each side justifiable by basic principles of ethics. While at this time the ANA Code of Ethics prevents nurses from participating in PAS, there may come a time when nurses will have to choose for themselves. It is key that each nurse examines their own personal beliefs and feelings prior to facing such a decision. If necessary, they need to be prepared to step aside and let another nurse provide care during PAS if they cannot resolve doing so with their own beliefs. 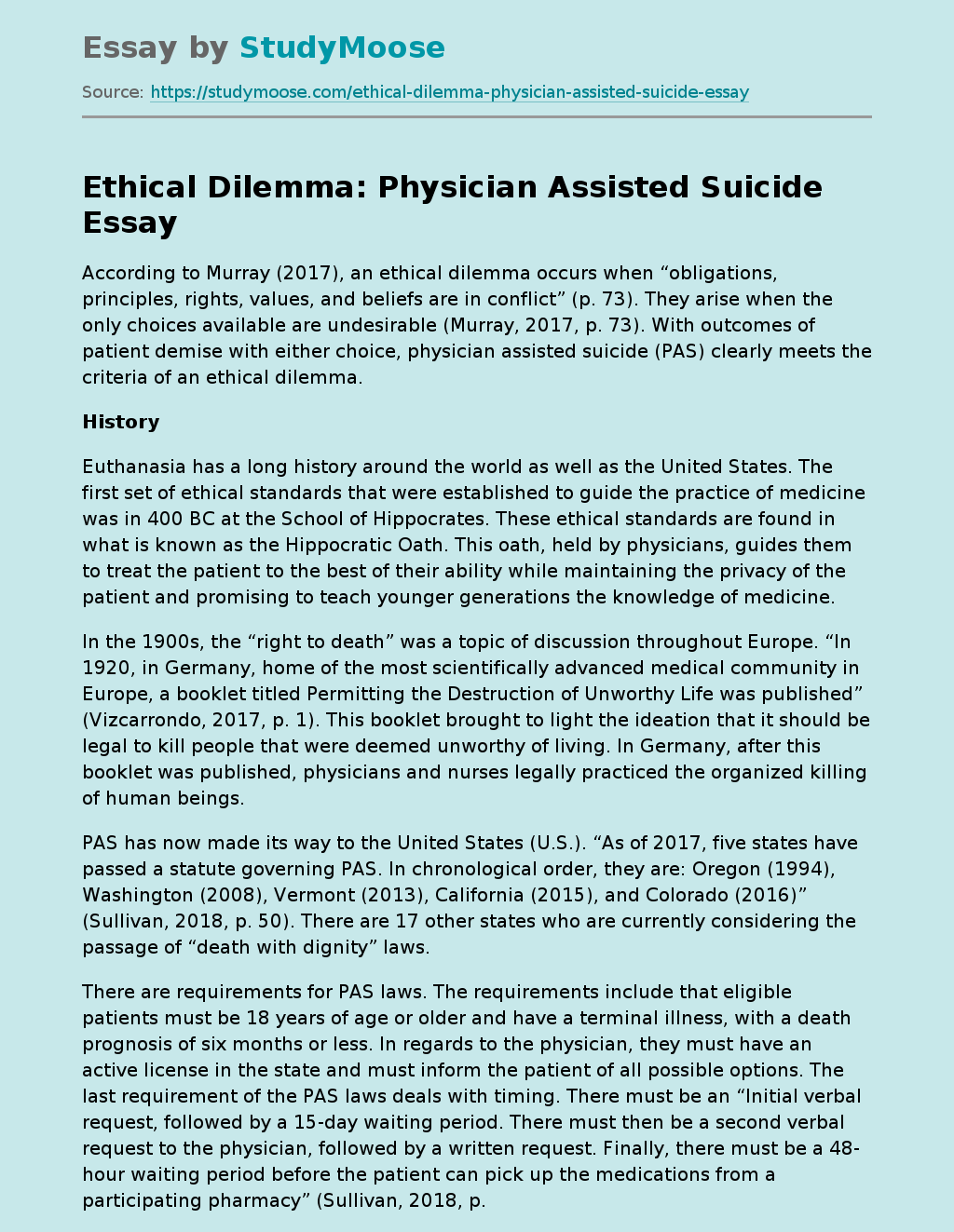