Ethical Behavior and Its Significance in Persuasion

In this paper, I am going to discuss the importance of ethical behavior and its significance in persuasion. I will also define two ethical theories and finally, I will explore the impact that ethical practices have on persuasion. Persuasion is extremely important in ethical behavior. It is what mothers use to teach their children to make the right decisions. It can also be used by drug users to convince the insecure teen to try a drug for the first time, in order to fit in with the crowd.

Don't use plagiarized sources. Get your custom essay on
“ Ethical Behavior and Its Significance in Persuasion ”
Get custom paper
NEW! smart matching with writer

Persuasion can be life saving or deadly. Such is the case of Phoebe Prince, a young fifteen year old teen who committed suicide in January of this year.

According to an article in the New York Times, she had transferred to an American school from Ireland and was eager to make friends. She attracted the attention of a football star at the high school, who apparently had recently broken off a relationship with another girl.

It was this girl who persuaded her friends to join in belittling Phoebe any chance they could. The taunts grew more and more violent and abusive, until they turned in to physical threats. After three months of being bullied every day, Phoebe decided to give her accusers exactly what they wanted.

She escaped the only way she knew how; by hanging herself in the apartment stairwell when she came home from school. This power of persuasion is not unlike Adolf Hitler’s hatred against the Jewish people. The more people they were able to persuade into joining in the tirade of accusations and unethical behavior, the stronger the momentum became, until death was imminent.

Fortunately, people are beginning to recognize the seriousness of bullying. The Swedish Work Environment Authority Act suggests that, “Preventative interventions should include whole community awareness campaigns about the nature of bullying and its dangers.

Efforts should also be made to enhance the emotional and organizational environments in school and work settings by promoting sensitivity, mutual respect and tolerance to diversity while prohibiting bullying” (Srabstein and Leventhal, 2010). Persuasion is the key to preventing this behavior for future generations. Although there are several if not many ethical theories, Utilitarian ethics is one that is used often. This theory is based upon the reasoning that “the right act is the act that produces the greatest benefits for everyone” (Waller, 2005). It is this reasoning that persuasion comes into play.

Utilitarianism strives to “maximize pleasure and minimize suffering for everyone” (Waller, 2005). With the basis that the right act will produce the greatest benefit, persuasion can be used to guide a person into committing the right act. For example, many people agree that shoplifting is wrong, because the effects from stealing from another cause more suffering than pleasure for all involved. Persuasion can be used to try and reason with the potential shoplifter so they change their mind and decide not to steal. However, persuasion can also be used to coerce the shoplifter into taking the item, using peer pressure to entice.

Either way, utilitarian ethics involve choices or choices involve persuasion. Another theory of ethics that can be impacted by persuasion is the theory of rights. These rights are put into place by the society in which someone lives. In the United States, we have our Constitutional Rights, which lists what our forefathers deemed to be used to guide its citizens in their quest for life, liberty, and the pursuit of happiness. There is also the ethics of human rights, such as enforcing the death penalty. In Europe after World War II’s death and destruction, the Council of Europe was created as a way to protect human rights.

This included abolishing the death penalty. What began as ten countries quickly grew to include 47 nations. When Ukraine joined the Council of Europe (CE) in 1995 (Bae, 2008), an immediate moratorium on executions was expected to be compliant with the other nations. Ukraine ignored the moratorium and it was during this time that executions actually increased (Bae, 2008). The Council of Europe was able to persuade Ukraine to abolish the death penalty using the threat that they could not continue to let Ukraine be a member of the CE if they did not comply.

However, the people of Ukraine, as well as other countries in the CE, were in favor of the death penalty. Their citizens were trying to persuade Ukraine to continue the executions. Ultimately, even though Ukraine was in favor of the death penalty, under the persuasion of the CE, they ultimately chose to abolish this law in order to maintain their continued membership. It is easy to see how ethics and persuasion ultimately coexist with each other and how they can be used in both, ethical and unethical situations. For every right or reason a person believes in, there was the initial persuasion that led them to those beliefs.

Ethical Behavior and Its Significance in Persuasion. (2018, Sep 13). Retrieved from http://studymoose.com/ethical-behavior-and-its-significance-in-persuasion-essay 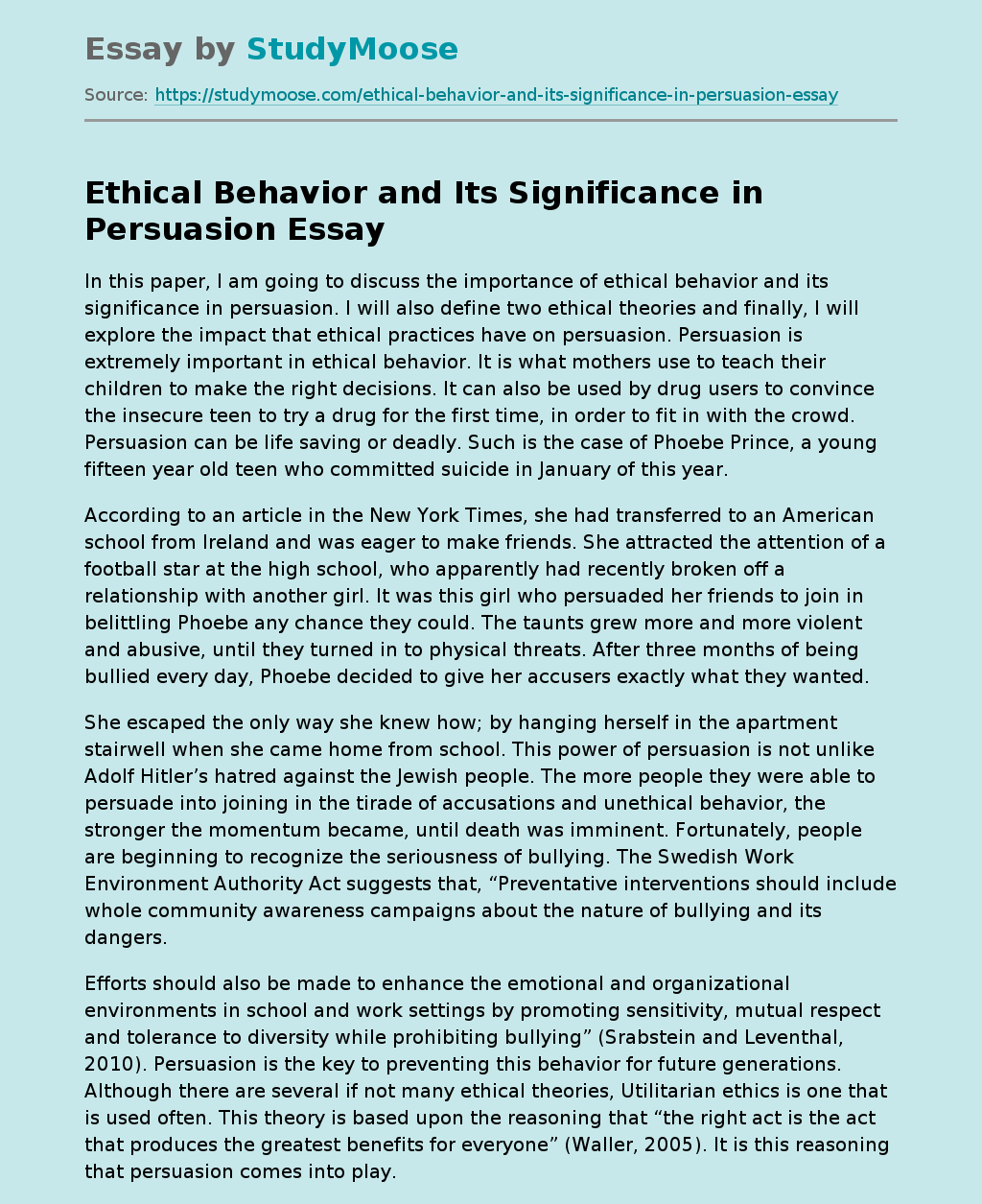