What led to the collapse of Enron under Lay and Skilling?

There were various reasons as to why Enron collapsed under Lay and Skilling. One reason Enron collapsed under Lay is because Lay simply did not practice what he preached. Lay did not live by his code of ethics and neither did his corporation. Not only that, but Lay and top management gave Andrew Fastow an exemption to the code of ethics to continue doing business. Another reason that Enron collapsed, under Skilling, is that Skilling had a performance evaluation process for all Enron employees that didn’t express the code of ethics that they should’ve followed which caused employees to rank their peers lower as to enhance their own position in the firm.

Turn in your highest-quality paper
Get a qualified writer to help you with
“ Enron Code of Ethics ”
Get high-quality paper
NEW! AI matching with writer

How did the top leadership at Enron undermine the foundational values of the Enron Code of Ethics?

The top leadership at Enron undermined the foundational values by granting an exemption to Andrew Fastow to continue bringing in dirty money through his actions.

Also, the top leadership allowed an unethical culture of ethics by promoting to the employees that they had to make the numbers literally any way they could even if that meant to break the law.

Given Kenneth Lay’s and Jeff Skilling’s operating beliefs and the Enron Code of Ethics, what expectations regarding ethical decisions and actions should Enron’s employees reasonably have had?

Enron had a great and respected code of ethics among its peers. Also, Lay and Skilling had respectable operating beliefs since they also represented the Enron Code of Ethics.

So, reasonably, the employees’ expectations should have fun to do the right thing morally and ethically as well as to uphold the respect, integrity, communication, and excellence Enron stood for.

How did Enron’s corporate culture promote unethical decisions and actions?

Enron’s corporate culture promoted unethical decisions and actions simply by the greed that the top management showed and carried out. For example, Skilling’s implementation of performance evaluations for all the employees was unethical because it was geared to fire the lower one-fifth of the employees. Not only that, but partnerships were mostly created only to hide the companies’ losses through the bonus program.

How did the investment banking community contribute to the ethical collapse of Enron?

The investment banking community contributed to the ethical collapse of Enron because not only were they enablers but they also participated in the frauds as well. For example, Enron would book loans called prepays to their operating cash flow. Also, Andrew Fastow was also allowed to use a tactic where a poor performing asset would be taken off the books and be sold back to the company at profit after the end of quarters after the earnings had been booked.

Enron Code of Ethics. (2016, May 13). Retrieved from https://studymoose.com/enron-code-of-ethics-essay 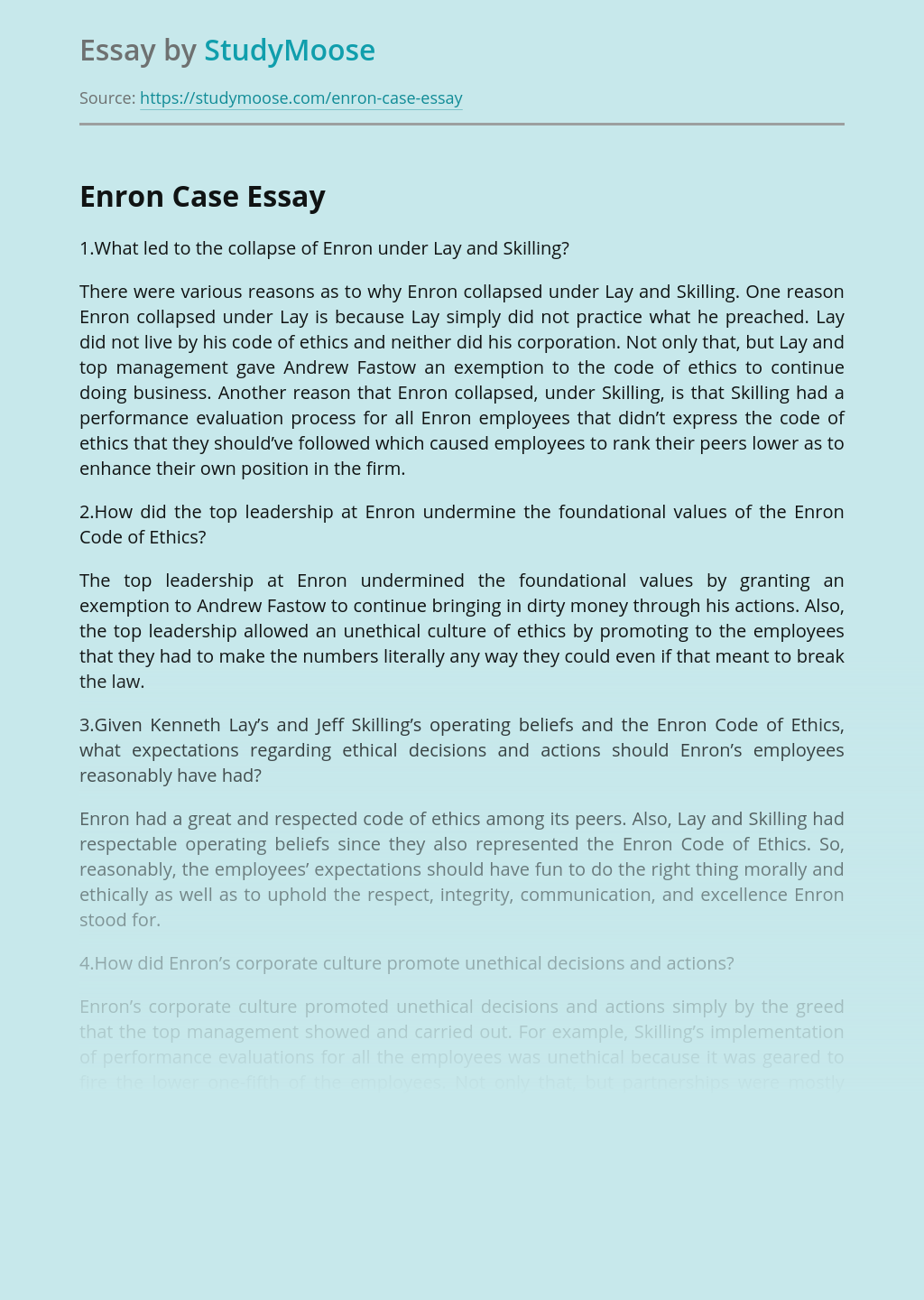 Turn in your highest-quality paper
Get a qualified writer to help you with
“ Enron Code of Ethics ”
Get high-quality paper
Helping students since 2015
Stay Safe, Stay Original