There has been an enormous increase in the demand of energy in Pakistan as a result of industrial development and population growth, as compared to increase in energy production. The number of energy consumers has increased to 12.5 million: household 46 per cent, industry 28 per cent, agriculture 12 per cent, bulk supply nine per cent and commercial five per cent. For faster economic growth, Pakistan need more generation. Supply of energy is, therefore, far less than actual demand, resultantly crisis has emerged. An energy crisis can be defined as any great bottleneck (or price rise) in the supply of energy resources to an economy.

Don't use plagiarized sources. Get your custom essay on
“ Energy Crisis and Pakistan ”
Get custom paper
NEW! smart matching with writer

Pakistan’s energy infrastructure is not well developed, rather it is considered to be underdeveloped and poorly managed. Rapid demand growth, transmission losses due to out-dated infrastructure, power theft, and seasonal reductions in the availability of hydropower have worsened the situation. Consequently, the demand exceeds supply and hence load shedding is a common phenomenon in all cities. Energy crisis in Pakistan started in 2007 and in 2008 it took a serious turn.

During 2009-10, energy supply and per capita availability of energy witnessed a decline of 0.64 per cent and 3.09 per cent respectively in comparison to previous year.

Pakistan needs around 15,000 to 20,000 MW electricity per day, however, currently it is producing about 11,500 MW per day hence there is a shortfall of about 4000 to 9000 MW per day. The power companies, circular debt is a big issue which has risen to 230 billion. Line losses, mainly theft, lone contributed Rs.125 billion to circular debt. It is better for the government to focus on curtailing power theft.

Mere power tariff raise could not revive the power sector, as numerous hikes in the past have not resolved the chronic problems of circular debt and power theft.

Pakistan’s energy consumption is met by mix of gas, oil, electricity, coal and LPG sources with different level of shares. Share of gas consumptions stood at 43.7 per cent, followed by oil 29.0 per cent, electricity 15.3 per cent, coal 10.4 per cent and LPG 1.5 per cent. Guddu plant is largest thermal operated plant with a capacity of 1,650 MW, while two largest Independent Power Plants (IPPs) are: Kot Addu (1,600 MW) and Hubb river (1,300 MW).

In 1994 during the Benazir’s government the IPs projects were bitterly opposed, blaming the government of taking commissions in these projects. However, no one had any idea how to solve the electricity problems. The situation went complicated when the civil-military bureaucracy didn’t allow Nawaz government to export surplus power to India because trading with the enemy on the basis of Most Favoured Nation (MFN) status was not acceptable to them. Now the circumstances have changed and we are ready to import electricity from India by granting them the same MFN status.

Alternative sources of energy: Wind power harnesses the power of the wind to propel the blades of wind turbines. These turbines cause the rotation of magnets, which create electricity. Though Pakistan has potentials of wind energy ranging from 10000 Mw to 50000 Mw, yet power generation through wind is at the initial stages and currently 06 Mw has been installed in first phase in Jhimpir through a Turkish company and 50 MW will be installed shortly. More wind power plants will be built in Jhimpir, Gharo, Keti Bandar and Bin Qasim Karachi.

Solar power involves using solar cells to convert sunlight into electricity, using sunlight hitting solar thermal panels to convert sunlight to heat water or air. Pakistan has the potential of more than 100,000 Mw from solar energy. Building of solar power plants is underway in Azad Kashmir, Punjab, Sindh and Baluchistan. However, private vendors are importing panels/solar water heaters for consumption in the market. Alternative energy Development Board (AEDB) is working for 20,000 solar water heaters in Gilgit Baltistan. Mobile companies have been asked by the government is shift supply of energy to their transmission towers from petroleum to solar energy panels.

Biomass production involves using garbage or other renewable resources such as sugarcane, corn or other vegetation to generate electricity. When garbage decomposes, methane is produced and captured in pipes and later burned to produce electricity. Vegetation and wood can be burned directly to generate energy, like fossil fuels, or processed to form alcohols. Brazil has one of the largest renewable energy programmes from biomass/biodiesel in the world, followed by the US. Alternative Energy Development Board (AEDB) of Pakistan has planned to generate 10MW of electricity from municipal waste in Karachi followed by similar projects in 20 other cities.

Nuclear power stations use nuclear fission reaction to generate energy by the reaction of uranium inside a nuclear reactor. Pakistan has a small nuclear power programme, with 425 MW capacity, but there are plans to increase this capacity substantially. Since Pakistan is outside the Nuclear Non-Proliferation Treaty (NPT), it is excluded from trade in nuclear plant or material which hinders its development of civil nuclear energy. Remaining issue in development of nuclear energy are enrichment of uranium from U235 to U238, controlling chain reaction and dumping of solid waste.

Pakistan has had wider potentials to tap energy, however, due to lack of any integrated/proactive planning, very less number of power producing plant were installed to meet demand. Resultantly, over the years, the gap between energy demand and supply drastically grew and now against demand of 20000 Mw, we are having around 115000 MW.

Energy mix in Pakistan is quite imbalance in comparison to other countries, with greater reliance on non-renewable resources of gas (43.7 per cent) and oil (29 per cent majority of which is imported). Prices of petroleum products/crude oil fluctuate and in current Afro-Arab political crisis, the oil prices are likely to increase manifold affecting oil prices in Pakistan.

Coal: Pakistan is having one of the largest coal fields in Thar, having reserves of more than 175 billion tonnes, which exceeds equivalent oil reserves of Saudi Arabia, Iran, etc. In addition to power generation, this coal can be used for chemical and fertilizer production. Moreover, employment provided to workforce can be instrumental in increasing GDP and economic prosperity to many families. This is a positive sign that our renowned scientist, Dr, Samar Mubarakmand, has been working on the project to produce electricity from coal.

Pakistan has potential of hydro resources to generate 41000 to 45000 MW; however, only 6555 MW is currently being generated by this important renewable resource. Four large hydropower dams namely Kalabagh 3600 MW, Bhasha 4500 Mw, Bunji 5400 and Dasu 3800 MW can be constructed to generate hydroelectricity. Similarly, many small to medium hydro plants can be installed on rivers and canals, etc.

Energy is pivotal for running all other resources and crisis of energy directly influences all other sectors of the economy. The economic progress is hampered by decline in agricultural productivity as well as by halting in operations of industries. One important factor of lower GDP and inflation of commodity prices in recent years is attributed to shortfalls in energy supply.

Social issue: this factor is primarily related to the domestic usage of energy (cooking, heating, and water provision). Load shedding cause unrest and frustration amongst the people and results in agitation against the government.

Decline in economic growth, lower agricultural productivity, unemployment and shackling industrial growth result in increasing poverty. Currently, around 40 per cent of our population is living below the poverty line and this ratio is increasing day by day. Ample control of energy crisis will surely yield in curbing this menace.

Conclusion: energy crisis has, more or less, plagued all sectors ranging from economy to industry, agriculture to social life, inflation to poverty and it is hampering national progress in a drastic manner. Nonetheless, the menace of energy crisis can be controlled by the government through making effective policies and its proactive implementation. Simultaneously, it is the responsibility of all Pakistanis, to utilise the available energy astutely and play our due role in the progress of our country. Following measures will be helpful in fighting the menace of energy crisis. 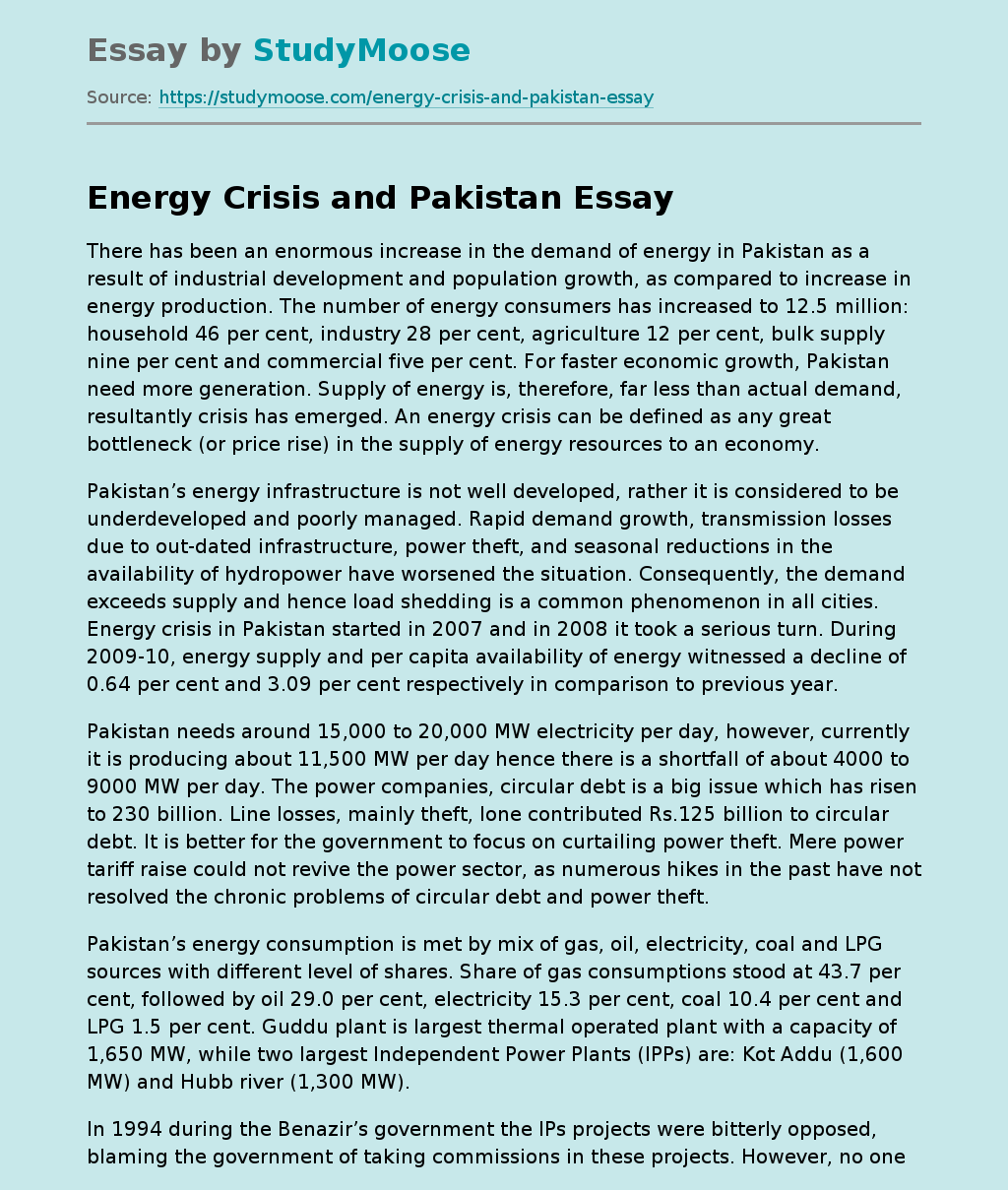