Ender’s Game, written by Orson Scott Card, had to be my fifth favorite book. Right under Speaker for the Dead, above that Xenocide, then Child of the Mind, Ready Player One had to be my favorite book of all time. Even though Ender’s Game didn’t contain as many theories/philosophies as the next books in the series it was still really interesting. The book told the story of Andrew Wiggins perfectly, I could imagine every scene and the book was so interesting I had craved it.

Don't use plagiarized sources. Get your custom essay on
“ Ender’s Game by Orson Scott Card ”
Get custom paper
NEW! smart matching with writer

The series has been my main reading source for sometime now.

The first book, Ender’s Game, focused mainly on the live of characters Introducing them and building a relationship between the reader and the stories characters. Andrew ‘Ender’ Wiggin, given his nickname as a child, Ender, since his sister couldn’t pronounce Andrew. He was the youngest of his two siblings, Valentine and Peter Wiggin. Valentine his older sister, empathetic and caring for her younger brother.

Peter the eldest sibling was resentful and destructive, usually bullying Ender. The government school they went to was meant for possible military training. Peter was the first to enter the school because of his age, he was later rejected for being to hostile and loving to fight more than they wanted out of a person. Valentine was rejected for being too caring and empathetic. The Government asked the parents of Valentine and Peter to have a third child because there first two were the best they had had, that third child was Ender.

Ender was bullied for his brains, because he was a third, the third born child of a house, and because he won every battle he fought, on the simulation that is. Ender was a the last hope for the family because having a third child was a financial disability and was frowned upon.

Ender, at six years old, was admitted to elementary school, he later left his home planet earth to join the battle school when the government thought he was ready. They tested him in a very uncivilized manner, removing his monitor, a device used to track the students of the school, signifying his rejection out of the school. This event lead to him almost getting beaten up, but the violent part of Ender, which ender calls the Peter side of him, violently beat up the older bullies. Ender was still bullied later that day by Peter and once again protected by Valentine. The next day General Gram shows up at the home of Ender Wiggin. He discusses the events of the previous day including Ender and the Older children. General Gram explained the reason for his visit, that he was their to recruit Ender. Ender reluctantly joins General Gram in the the space shuttle with dozens of other students from other schools. This leads to the Battle school where they will learn to become teammates, to strategize, to fight.

Ender joins a few squads later on being kicked out of one after another. The squads are formed to participate in a 0-g shooting game where strategy is key, gravity is simulated on the ship through a continuously spinning ring where the quarters are held. Ender after joining several teams gets training by a companion in one of the squads he joined. After showing excellent prowess in strategy and after about 4-5 years of training he moves on to command school, where computer simulations help him train using spacecrafts. Their main goal for training the students is to prepare for the alien invasion of the buggers. The buggers are intelligent beings that are controlled by hive queens. After being attacked 70 years ago they had sent ships at light speed toward the home planet of the buggers. The ships carried an M.D. device, Molecular Disruption Device, cleverly named the Little Doctor, rips apart the molecules into its base elements. The ships communicate the Ansible a result of the last bugger war used for instantaneous communication. The Ansible uses the Philotic web, the connection between philotes that when one is moved no matter how far away the other may be it moves at the exact same time both being affected instantly, this theory is similar to my understanding of Quantum Entanglement.

Once the ships had arrived at the home planet of the buggers Ender was told he would take a final test before he could becoming ready to take on the bugger planet. He plays the simulation using every tactical advantage he has, after sacrificing all of the exterior support ships, and using all of the smaller defensive ones to create a shield around his ship like a bullet blasting through the seemingly infinite barrage of enemies. Finally after breaking through their lines the little doctor is fired. The planet disappearing before their eyes. All of the ships stop flying and everything just stops. The commanders, generals, and everyone else watching the event cheer and celebrate.

General Gram, with tears in his eyes, walks up to Ender and tells him he did it. Ender stands there in confusion unknowing of the horrific deed he had just committed. He had just murdered an entire species of intelligent lifeforms. This devastated him for weeks upon weeks. During that time Valentine and Peter had been using Aliases online to gain influence, Valentine under the name Demosthenes and Peter using Locke both names coming Influential Philosophers. Peter had decided to become hegemon and had Valentine help with the process of doing so. Ender at the command school is visited by Valentine with a proposal, she asked if he would be the leader of the new planetary colonization of the bugger worlds, ender accepted and they took a colony to this foreign world. Ender while there realizes the area created by the buggers.

It was the location of the game he once played. Only he had access to this completely innovative game during his time in the battle school. The game adapted to Ender showing images of his personal life. Once he realized where he was he set out to get to the end such as he had done many times before. When he reached the tower it being exactly the same except there was no snake on the ground and no mirror with Peter staring back at him. Just a snake sowed into the carpet and a sketch of a boy on a metal sheet in place of the mirror. He removed the metal sheet and found a hallway when he reached the end he found a cocoon. When he touched it it had started speaking to him no physically, not with a mouth, but directly into his mind.

The cocoon was the last surviving being of the bugger race, it was a queen. The queen and Ender talked about what Ender must do and about the queen herself. Afterwards, Ender decided to leave the new colony and Valentine came with him, her not knowing about the cocoon. They travelled to all of the inhabited worlds looking for a place for the queen to hatch and start a new colony of buggers.

The first Book of the Enders Game series was an amazing experience. If Ready Player One hadn’t inspired a new love for books Ender’s Game had. Believe it or not, I had never read a science fiction novel before, this being my second one I feel may hurt my experience with future Science fiction series. The way Ender is portrayed in the story as half of Peter and half of Valentine affects him all throughout the story. He is self-conscious about the violent part of him that represents Peter. His version of Peter, the one he imagines when thinking of him, interferes with his life even into his 60’s when Peter is 3000 years dead and he has moved on. These details are from the beginning of the second book. Ender’s life is more than any real person could handle, and I think that is something anyone could agree on. The book gives much, much more detail. Truly I don’t have many thoughts about Ender’s Game. Almost every event that occurs in Ender’s Game is tragic, everything is plainly laid out left for no interpretation until the third book.

Stefan Rudnicki’s narration of the book helped bring this story and its characters to life along with many other narrators. Xenocide, the 3rd book, was originally intended to be a project called Philotes, not the greek goddess, the author was working on a paper about ideas in physics he found interesting and things that might have existed outside the realm of organized existence. He realized this would be perfect for the world of Ender’s Game. Xenocide was reconstructed to include Ender, Valentine, and the project Philotes since it matched the story perfectly. The author never specifies which ideas came from Philotes and which from Xenocide.

So the books are not only sci fi novels but scientific and philosophical Galaxy. In Ender’s Game the Ansible works through the philotic web to transfer information instantaneously to the ships they control across the galaxy. Most of the technology they have is due to their encounter with the buggers and I find them extremely plausible due to the relation between the ideas and real life scientific theories.

Some quotes or philosophical ideas may be “In the moment when I truly understand my enemy, understand him well enough to defeat him, then in that very moment I also love him.” and “Welcome to the human race. Nobody controls his own life, Ender. The best you can do is choose to be controlled by good people, by people who love you.” The book was amazing and pure fun to listen to. Talking about the first one and parts of the others was great as well. 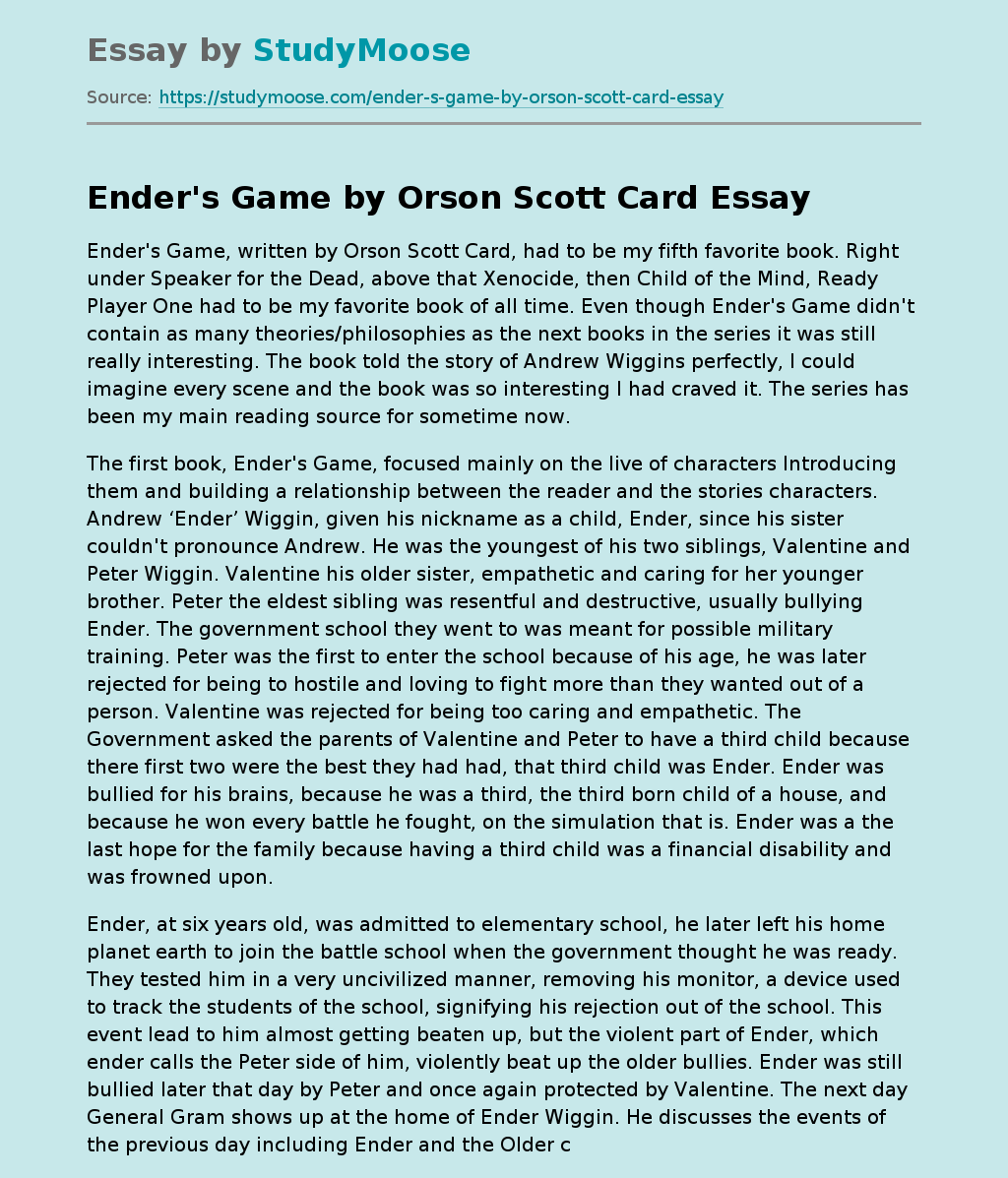