In the novel Ender’s game, Orson Scott Card attempts to convey the message of the conflict between compassion and ruthlessness. For one thing Ender often compares himself to his ruthless brother Peter every time he himself does something mean and cold hearted. But Ender also has a compassionate personality. he shows his compassionate personality in many cases. He also shows that Ender may have a bit of a ruthlessness in him, but resents himself for it. He then also shows that compassion beats ruthlessness when Enders overtops ruthless Peter in almost everything they do.

Don't use plagiarized sources. Get your custom essay on
“ Ender Book Report Compassion vs Ruthlessness ”
Get custom paper
NEW! smart matching with writer

Therefore Orson used the theme compassionate vs. ruthlessness by exhibiting Ender’s success and Peter’s failures to exhibit the theme compassion vs. ruthlessness. Peter has more of an influence in Ender’s life then he realized, He even acknowledges it one point when thanks Peter in his mind for teaching him how to hide his feelings. Often Ender compares himself to Peter especially when he ends up hurting or killing something or someone.

After he beats up Stilson. He thinks that he’s like Peter. “Ender leaned against the wall of the corridor and cried until the bus came. ‘I am just like Peter.

Take my monitor away and I’m just like Peter. ‘” (page 8) Ender realizes with anguish that he’s turning into Peter. He finds this really sad. Another time he feels like Peter is when is when he’s flying to battle school. On the way there, a boy kept harassing him.

Ender then proceeds to harm the boy and break his arm. “Just as the next blow was coming, Ender reached up with both hands, snatched the boy by the wrist, and pulled down on the arm, hard… I am Peter. I am just like him. And Ender hated himself. ” (page 122) Ender, even though he was defending himself, broke a kid’s hand and compared himself to Peter.

He also hated himself for it. At one point, after Ender see’s a reflection of Peter staring at him on a mirror in a reality game that shows your perspective of reality, the teacher’s acknowledge it. “‘But why. His brother is dangerous, his bother was rejected for the program because he’s one of the most ruthless human beings we ever laid hand on. Why is he so important to Ender? why after all this time? ‘” (page 122) Peter is clearly important to Ender because Ender always keeps comparing himself to him, bares such a resemblance, and resents Peter, and himself.

In conclusion Peter had a major influence in Ender’s life, in a sense of a bad role model, in Ender’s mind. Ender, all though often comparing himself to ruthless Peter, was actually very compassionate in many senses. When fellow student, and victim Shen is being bullied by Bernard, Ender interferes. Ender makes Bernard look stupid by sending stupid messages in Bernard’s name to make Bernard look stupid and make Shen happy ” Cover your butt. Bernard is watching -God. Bernard went red with anger. ‘ Who did this! ‘ he shouted ‘God, ‘ said Shen. (page 50) Ender shows compassion by making Shen have a little bit of a victory, and making Bernard look plain stupid.

He makes sure that Ender wins the argument yet making Bonzo not look foolish in front of his boys. This shows many characteristics including kindness, compassionate, and also leniency. Also Ender shows compassion when he continued to train with the launchies (basically a group of kids that are new to the battle school. Ender was one of them but Ender quickly advanced ahead of his class. ) “‘Now your really in an army. ‘ said Alai ‘You don’t need have to keep practicing with us. ‘ ‘From you I can learn things nobody knows,’ said Ender ‘Dink Meekr is the best.

I hear he’s your toon leader. ‘ ‘ Then let’s get busy. I’ll teach you from what I learnt today. ‘” (page 103) Even when Ender is finally part of an army that actually uses him, he is still trained with the launchies, his former friends. He did not forsake them and showed many attributes such as caring, compassion, and kindness. In conclusion even though Ender may have a bit of Peter’s influenced ruthlessness he is still very kind and compassionate. Compassion is shown to top ruthlessness when Ender succeeds in achieving in everything that Peter failed in.

Ender is first more successful then Peter when he keeps his monitor longer then Peter. “But Peter would not soothed. ‘Like us? He keeps the little sucker till he’s six years old. When did you lose yours? You were three. I lost mind before I was five. He almost made it, little bastard, little bugger. ‘” (page 10) Ender kept his monitor longer then Peter. Peter noticed this and pretty much snapped at his brother. This shows that Peter was both mad and jealous. The second time when he overtops Peter is when Ender is invited personally to battle school by Colonel Graff “‘My name is Graff Ender.

There was no games, the battles were real, and the only enemy you fought was the buggers. You won every battle and today you finally fought them at their home world, where the queen was, all the queens from all their colonies. They all were there and you destroyed them completely, They’ll never attack us again. You did it. You'” ( 296-297) Ender was able to defeat the buggers, and win a whole entire war single handily He achieved every boy’s dream, to beat the buggers and save mankind. In conclusion Ender prevailed over ruthless Peter, which made him more successful then Peter.

In conclusion Orson exhibits the them Compassion vs Ruthlessness by exhibiting the success of Ender and the failure of Peter. He shows this by comparing Ender to Peter and making Ender hate himself for it. But also exhibiting Ender’s overwhelming compassion to his other students. He also shows this by most importantly compassionate Ender vs ruthless Peter and how Ender overtopped him in everything he (Peter) did. Ender succeeded in everything Peter wanted to do. Even if though you need ruthlessness to do something dreadful, if you have enough compassion, you win out in the end. 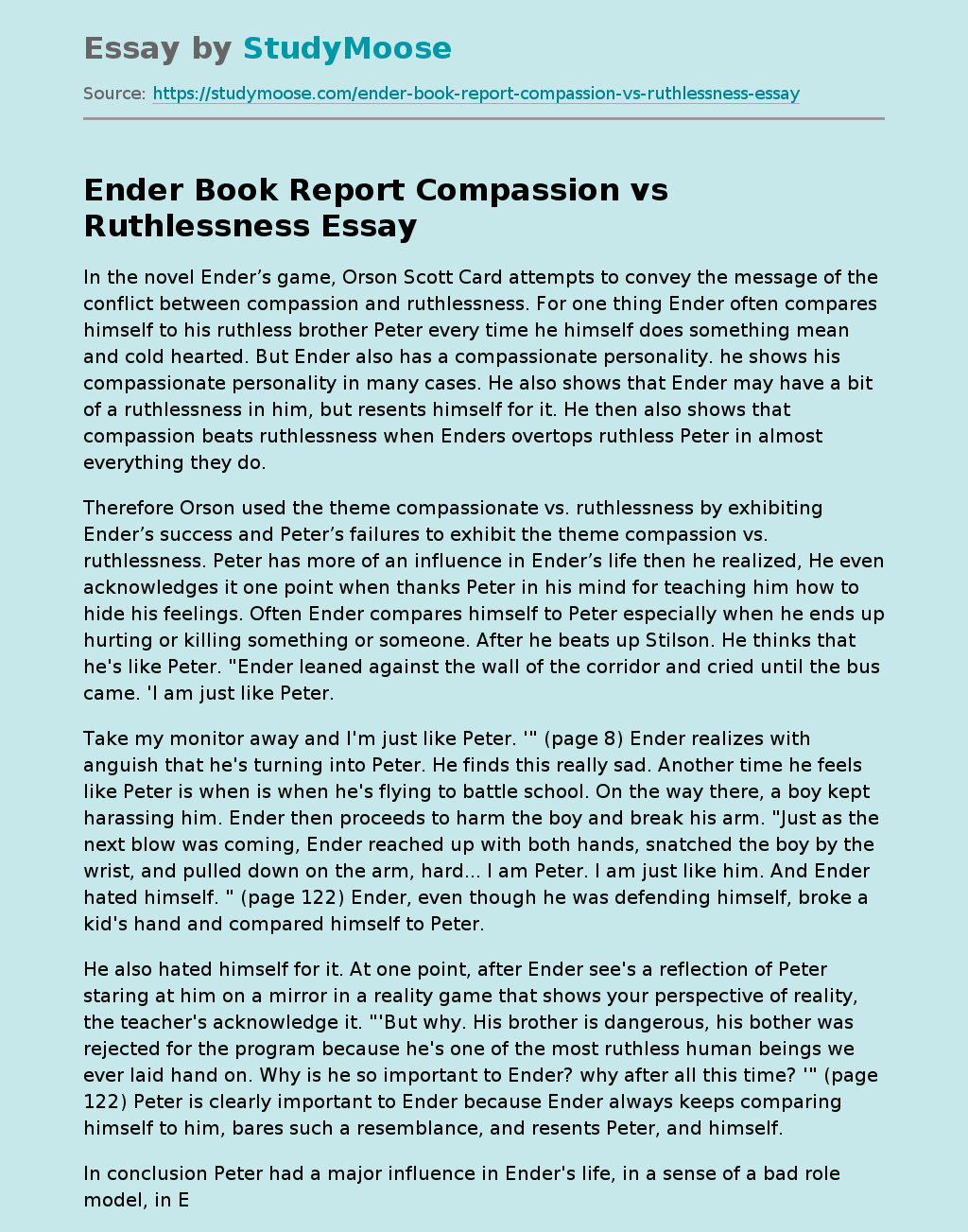