Enchantress from the Stars Book Review

The book I read was Enchantress from the Stars, by Sylvia Louise Engdahl. She was born on November 24 1933 LA, CA. She went to school to become an elementary teacher, and stayed in it for 1 year, then decided she hated it. She then became a computer programmer for the Top Secret SAGE air defense system for 10 years. She really did like it, even though she thought school was boring, she thought that was interesting. It was like going to the best class in the world and being paid for it.

Don't use plagiarized sources. Get your custom essay on
“ Enchantress from the Stars Book Review ”
Get custom paper
NEW! smart matching with writer

She then became a full time writer from 1968-1980, she wrote 8 fiction (sci-fi) books, 5 non-fiction books, and won one Newbery award for Enchantress from the Stars. She then moved onto becoming a software developer and vender for PCs until 1985. She then worked online from 1985 on. She aims to “Bring present day issues into perspective through speculation about the future as related to the past with particular emphasis on space exploration”

The theme of this story involves the issue of clashing cultures.

The stronger civilization wants to wipeout and take over the medieval culture. It is similar to the scenario faced many times in our world. This happened when the Europeans conquered the Indians in the Americas. In the book the Imperialists came from a very technologically advanced planet, and the natives were similar to the people in the feudal system back in the time of the dark ages. The theme shows how those two cultures interacted and how the Federation Anthropologists tried to prevent ether culture from being damaged.

There is also a secondary theme, which shows the main character, Elana growing up. She starts out as an inexperienced trainee and because of the difficult decisions she has to make she matures and discovers other things about herself. In the database Discovering Authors, Sylvia Engdahl herself discusses her use of themes. She says these are the themes that she considers important. All of which are used in the Enchantress. She uses the themes of the importance of empathy, intelligence and moral courage. She also believes that the individual’s role in effecting change is an important idea and people need to approach problems in a symbolic way in addition to a literal level.

This book is a Sci-Fi adventure book. The plot involves many far superior races, and a much more advanced civilizations then any others existing in the universe. The advanced races created an Anthropological Service that studies the less advanced civilizations. The less advanced “youngling worlds” are split into 2 categories. Only when they reach the 3rd, most advanced stage are they let into the Federation. The first stage is when they are “infants”, lacking technology, and having much superstition of magic, while having no control over the natural world. The adolescents of the younglings are in the beginning stages of the technological revolution, to the point where they are just starting to grasp that science isn’t the only thing out there. They also tend to believe they are the most powerful society in the entire universe. The advanced civilizations, have mastery of technology, and also have the ability to communicate with ESP, and use the telekinetic powers that are invested into every person at birth.

The way that the Anthropological Service acts, is that they don’t intervene, just study the other undeveloped worlds, until they are ready to join the rest of the federation. They will intervene only when one race is infringing on another race’s culture. The way they intervene is through a team of 3 or 4 people that are sent to the world to stop the invasion. They are not allowed to act directly, or it would be worse then even stopping the invasion in the first place. It would also change the future of their society, and stop them from developing naturally. In this case, they end up stopping the invasion by teaching a native how to use telekenetics, and then they use him to frighten off the invaders, which are frightened by things they don’t understand.

Elana is a teenage trainee (level one) of the Anthropological Service, which studies primitive alien worlds and cultures that weren’t yet advanced enough to join the Federation. The author chooses to tell the story from Elana’s point of view. It is told in the 1st person. All you know of the other characters is through how she views them. It shows her perceptions into Georyn, the native of the primitive world, and Jarel, the imperialist doctor. The book is the journal entry, or report that she wrote. Elana is young, intelligent, and naïve. She is green, with not much experience outside her own planet. She snuck onto her father’s ship, and plays a major part in saving the world that they were sent to. The only reason she played a role at all was because, of the crew was killed in an incident, so she had to fill her spot. She learned that life was harder, more ambiguous and she had to do things that she didn’t like, to create a good end result. She learned that sometimes people need to sacrifice their life for a greater good. She learned more about herself, and fell in love with someone other then the person she thought she was going to marry.

In science fiction books, you need to suspend your disbelief, because you are dealing with stories of aliens and things that don’t really exist. Science fiction is often an allegory for events concerning our world. It is sometimes easier to understand big issues if they are placed in an alien setting and not set on Earth. In science fiction the important thing is to see if the plot is internally logical and consistent. The Enchantress from the stars is an internally logical book. The author herself in the preface says, “The locale of this story can be fixed neither to space or in time. Perhaps it is the planet earth-then again perhaps not…” This timeless placeless setting contributes to the story in that it lets us look at contemporary problems in a new light. Allows us to consider the issues without bringing our culturally preconceived notions to the problem.

Sylvia Louise Engdahl defiantly has a strong message in this book. She believes that all cultures need to be left alone to develop properly. She also believes that outsiders should not touch the other less developed cultures, or they will be hurt in the end and they will never reach their full potential. She shows what happens when one culture tries to take over an area where another culture already exists. She believes that there are really no bad cultures, just societies at different stages of development.

As a person that has grown up in a country that is only 225 years old, it is easy to identify with the problem of clashing cultures. The United States was settled on the land that was already inhabited by other civilized people. When colonists first came to this continent, they were dependent on the Indians to help them. Then after the colonists started to grow they needed more space. The colonists fought the Indians into submission. They finally pushed them into reservations and destroyed much of their culture.

This is the first book I have read by this author. The story is compelling and fast paced to keep you engrossed in the book. In addition to a good book, it also deals with large issues. The characters were believable, and had interesting personalities. It made me think. I recommend that you should read this book.

Enchantress from the Stars Book Review. (2021, Jun 21). Retrieved from https://studymoose.com/enchantress-from-the-stars-book-review-essay 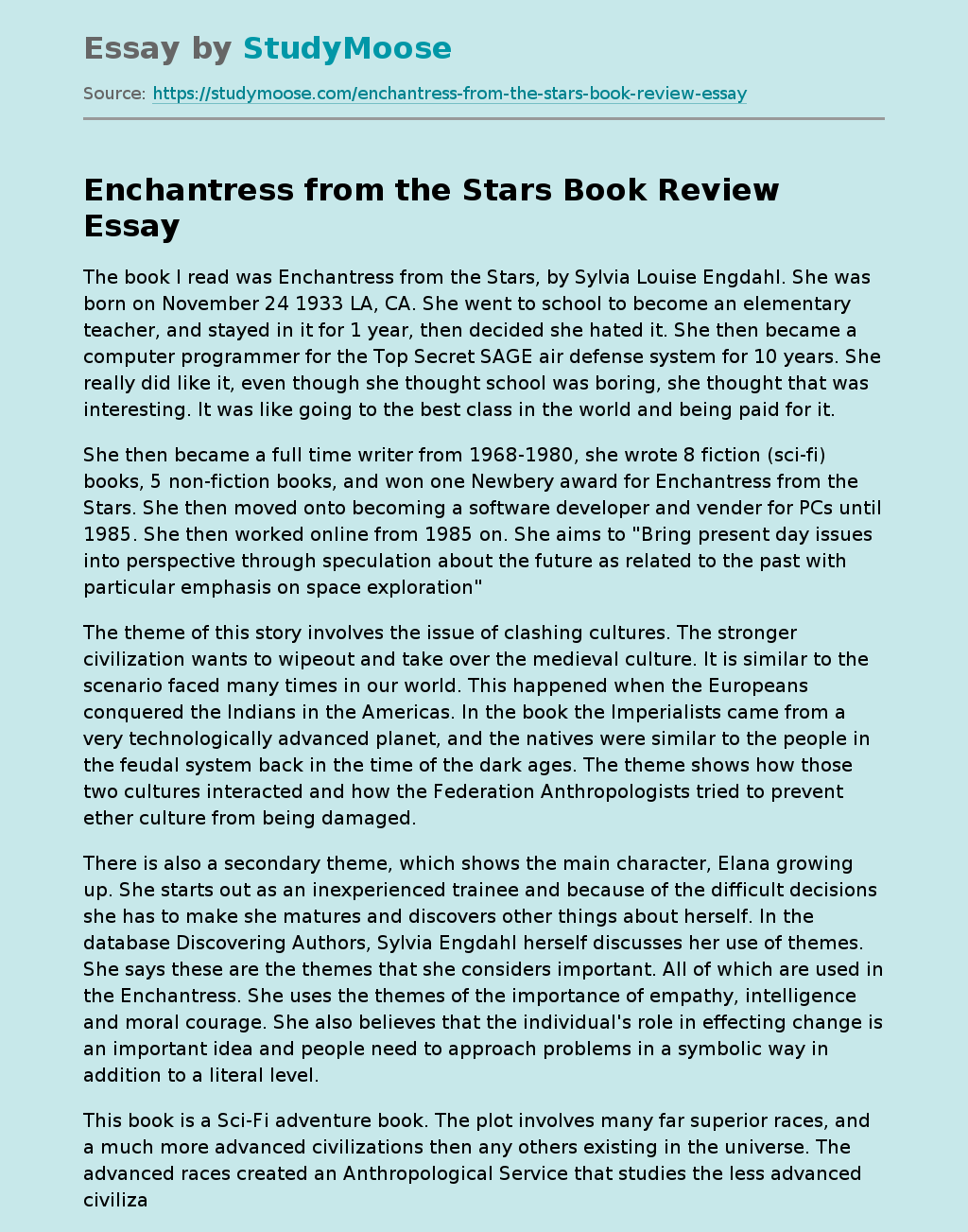