Emily Dickinson was born on December 10, 1830 in Amherst, Massachusetts and had deep roots in New England. She was a brilliant student, educated at Amherst Academy for seven years and after that, Mount Holyoke Female Seminary for a year, and published about 1,800 poems in her lifetime. The poet Emily Dickinson uses slant rhyme and imagery to create a unique, controversial style.

“Success is Counted Sweetest” can be seen as an example which has slant rhyme to signify triumph. For example, in the second stanza, “victory” and “today” are slant rhyme but are not in sync to each other (Dickinson 2).

Don't use plagiarized sources. Get your custom essay on
“ Emily Dickinson: An Literary Anaylsis ”
Get custom paper
NEW! smart matching with writer

This shows the reader that the “Host” which is introduced in Line 5 knows about the “victory”, but do not give a perfect image of it since they are taken out of the ruin. This also relates to the major theme of the poem, which is success can only be understood by people who have failures. Additionally, in her other poem “I Felt A Funeral In My Brain”, the second stanza has the words “Drum” and “Numb”, which rhyme and also in the first stanza, the words “fro” and “through” almost rhyme (Lines 2, 4, 6, 8).

Most of Emily Dickinson’s poems that are published give attention to the theme of death. For example in the first stanza, she tries to make the reader sense what death is and portray it by imagery with the use of slant rhymes which bring the words together and creates a pattern (Line 4). To conclude. Emily Dickinson is well known for her slant rhymes she puts in her poetry to make it more meaningful.

Dickinson’s use of imagery is mainly used for her poems about nature and beauty. For example, in one of her poems, “A Bird Came down the Walk”, the last stanza has a lot of imagery such as the words “Oars”, “Oceans”, or “Leap” (Lines 17,20). She tries to create the image in the reader’s mind about the bird being related to nature, beauty, and union. Dickinson does this by separating the environment and atmosphere from the bird’s interaction with nature. Another poem that also used mental images is “Hope is the Thing with Feathers”, and as the poem progresses, the imagery grows stronger towards the end. This poem uses actions, such as “That perches in the soul” or “I’ve heard it in the chilliest land” (Lines 2,9). These actions tell us the significance of the theme that connects with her writing style about nature. Over all, the images, and metaphors that go with it, give an important message about nature and other poems that also relate with beauty.

Slant rhymes and imagery are two of the major elements Emily Dickinson uses in her poetry. She tries to send out her message in every way possible which will not hurt anyone’s feelings and is also particular about her use of words. 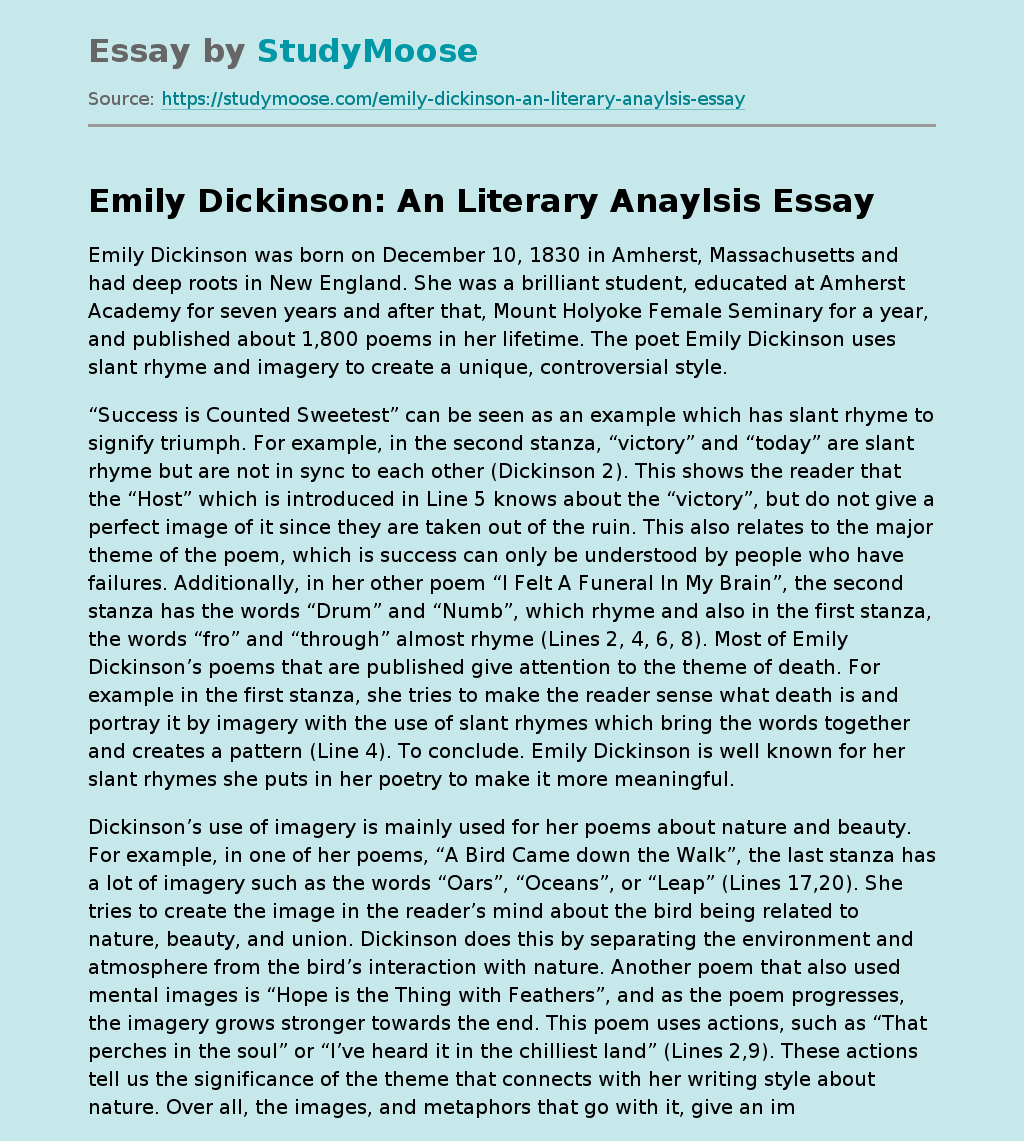