Elements used in Raisin in the Sun

Lorraine Hansberry’s Raisin in the Sun is a monumental play in the theatrical world. Produced in 1959, it became the first play written by an African-American woman to hit the stage and was later nominated for several Tony Awards. The play touched many controversial themes of the time including racial discrimination and poverty. The design of Raisin in the Sun, including scenic, costume, lighting, and sound elements, were crucial to developing the plot and emphasizing these themes. All of the elements are vital to the message and audience interpretation of the production, and overall, the Playmakers Repertory Company executed them well.

Don't use plagiarized sources. Get your custom essay on
“ Elements used in Raisin in the Sun ”
Get custom paper
NEW! smart matching with writer

The scenic design of a play is arguably the most important element of a production. It is what sets the stage and puts both the characters and the script into context. In Raisin in the Sun, the set, including scenery and props, helped define the characters, allowing the audience to get a feel for the setting and time period. Most importantly, the scenery developed the line of the play—the space in which the Younger family had to live—which was strategic to developing plot conflict.

The Younger family lived in a small, run down apartment that emphasized their social class.

To name a few, the wallpaper was discolored, the living room couch was old and musty, and the only visible bedroom to the audience was merely big enough for the bed. Travis, the son, was forced to sleep on the couch, and it was unclear how much space was upstairs where Beneatha, the daughter, and the Grandmother, Lena, slept.

The design of the apartment played to the overall conflict within the family; the desperation to escape poverty only intensified within these cramped quarters.

Although, the characters managed to deal with their living situation, it caused tension to build within each member of the family, which was a crucial part of plot development. The lower class feel of the house honed in on Walter Lee’s burning desire to get into business and climb the social ladder. The less-than-luxurious surroundings seemed to amplify his unhappiness when he entered the room, allowing the plot to build along with the tension in the house. In addition to scenery, the props strategically placed around the housed

illustrated the family’s cares and values. Throughout the room, the audience could see many picture frames. However, the two that were predominately displayed were a picture of Christ hanging over the front door, and a picture of Lena’s deceased husband that stayed on a table in the living room. These props emphasized importance the Younger’s placed on family and religion, which came up many times throughout the production. The entire family lived under one roof, looking after one another and making ends meet, together as a whole.

In addition, the plot centered around a life-insurance check from the death of Lena’s husband. This kept the element of religion present since he was deceased and in the eyes of Lena, watching over the family. Both the design of the apartment and the detail of the props within it gave the audience a greater understanding of the deep-rooted values and conflicts of the family. The costume design of Raisin in the Sun went hand-in-hand with the scenery and props. The realistic clothes of the Younger family further described a family of lower class, although not an untidy one.

Each day, the members of the family would dress for work or school as well as they could, which illustrated the pride the family carried. This enormous pride stemmed from an important theme within the play: overcoming racial discrimination. Lena dreamed of escaping the busyness of Chicago, and bought a house in a white neighborhood with the hefty check from her husband’s insurance policy. Her pride kept the family afloat and was their only defense against the discrimination they faced from the area. Furthermore, each character’s costumes fit their personalities.

While Lena, Ruth, and Walter Lee were usually dressed in working clothes, reflecting their family duty, Beneatha dressed in more modern clothes, illustrating her character as a free-spirited college student. One day she would wear girly skirts and flowery designs, the next she was going back to her roots wearing African garments and sporting natural hair. The costume designers successfully captured each character’s personality as well as keeping the image of pride apparent through the character’s choice of clothes. In addition to scenic and costume design, every play must have specific lighting.

This sets the mood of each scene, giving the audience a better feel of what is happening within the plot. For the most part, the lighting within the apartment was warm and dim, giving the setting a homey and somewhat relaxed feel. However, the dimness of the light also played upon the unhappiness that stirred within the family during certain scenes. These moments of lighting kept with the realistic aspect of the play. However, there were times of unrealistic lighting meant to enhance a scene. When Beneatha was dancing to African music and Walter Lee came in and joined her, the lighting became jungle-like.

The reds and oranges along with the images of palm frons surrounded the two, carrying them away from the real world. Although this would never happen in real life, it was apparent the lighting was illustrating what was going on in their minds, showing the desire to escape their current troubles. The second and only other time of surreal lighting was when Walter Lee had his breakdown and then moment of clarity near the end of the show. The entire set went dark except for a spotlight on him. This choice in lighting was appropriate for such a somber scene and drew the audience in even more.

The times of abstract or unrealistic lighting did not take away from the realness of the play. Instead, it enhanced the scenes to the benefit of the audience. The last element of design that affected the play is the sound design. Obviously the show had typical sound effects—doors slamming for emphasis, Beneatha playing African music, etc. —that decorated each scene as it unfolded. However, there was a significant aspect to the sound design of this particular production. Throughout the play, the characters would turn on the radio and interviews and other recordings from the 1960s would play over the speaker.

Some of these included Lorraine Hansberry speaking about the nominations and winning the Tony and discussion of civil rights movements of the time. Some may think this was distracting, but it anchored the play within the time period. This allowed the audience to get a better feel of what was happening during the era and highlighted the major theme of racial discrimination within the plot. All in all, the production of Raisin in the Sun was a success. Yes, this is highly due in part to the excellent skill of the actors.

However, without stagecraft, a play cannot be complete. The elements of design produce a world that actors could never create on script alone. In the Playmakers Repertory Company’s production of Raisin in the Sun, the scenic, costume, lighting, and sound design worked cohesively to enhance and develop all aspects of the characters and plot. The provocative themes of escaping poverty, chasing dreams, and overcoming racial discrimination were illustrated brilliantly by tremendous execution of the elements of design and an impressive performance by the acting company.

Elements used in Raisin in the Sun. (2016, Jul 17). Retrieved from http://studymoose.com/elements-used-in-raisin-in-the-sun-essay 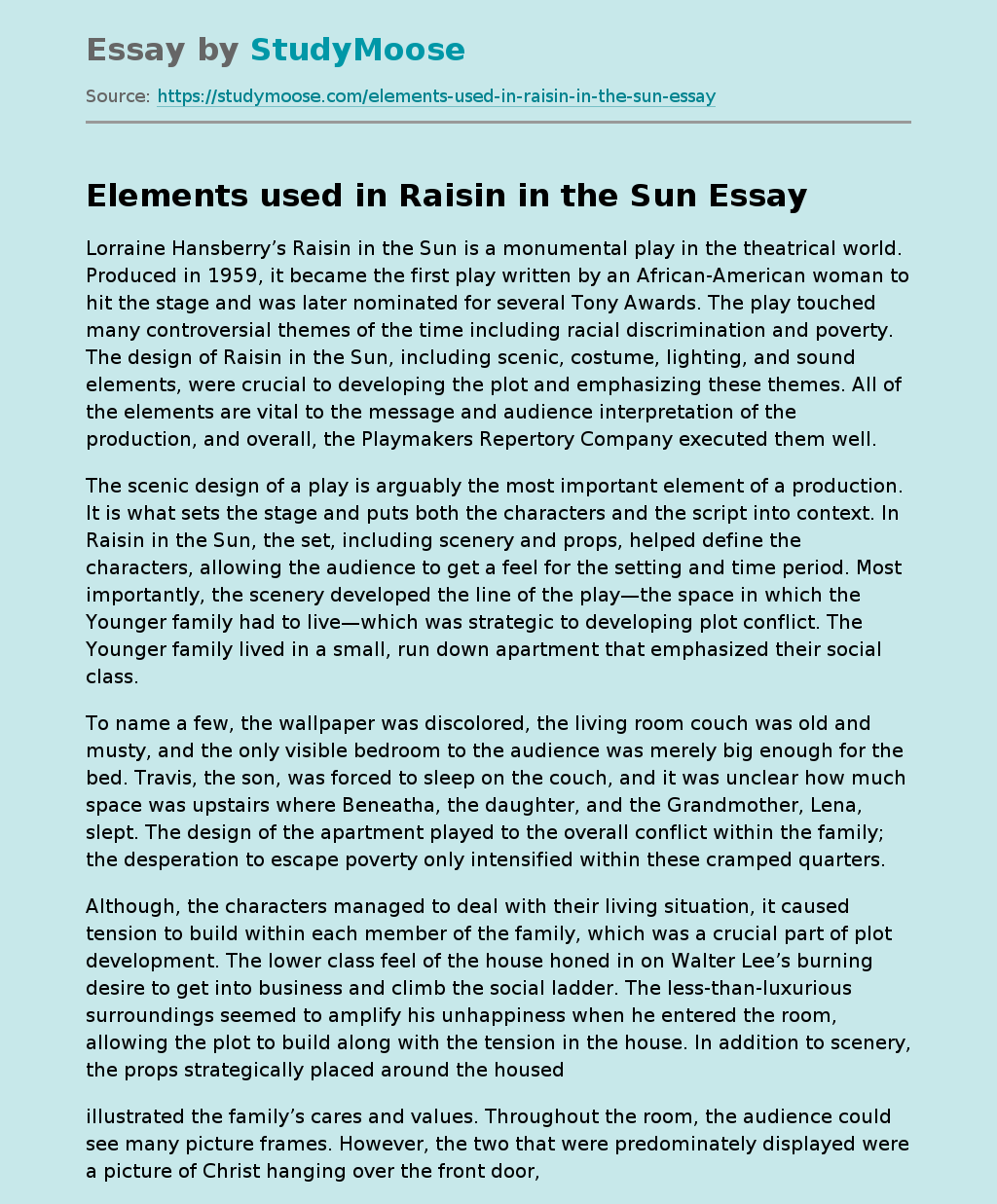