Every thing in the world is differentiable on the basis of its electrical conductance. Some things are called insulators and these substances never conduct electricity. they include things such as cold air,wood and plastic. Then there are things that conduct electricity and current flows through them, they are called conductors. examples of conductors are most metals like copper and steel. Other materials that are sometimes used as conductors are silver, gold, and aluminum.

Copper is still the most popular material used for wires because it is a very good conductor of electrical current and it is fairly inexpensive when compared to gold and silver.

Aluminum and most other metals do not conduct electricity quite as good as copper. The electrons of different types of atoms have different degrees of freedom to move around. With some types of materials, such as metals, the outermost electrons in the atoms are so loosely bound that they chaotically move in the space between the atoms of that material by nothing more than the influence of room-temperature heat energy.

Because these virtually unbound electrons are free to leave their respective atoms and float around in the space between adjacent atoms, they are often called free electrons. Also, this relative mobility of electrons within a material is known as electric conductivity. Conductivity is determined by the types of atoms in a material (the number of protons in each atom’s nucleus, determining its chemical identity) and how the atoms are linked together with one another. Materials with high electron mobility (many free electrons) are called conductors, while materials with low electron mobility (few or no free electrons) are called insulators.

Some substances that conduct at high temperatures are called semi conductors. they do not conduct as good as conductors but have various uses that make them more versatile than conductors themselves. Lastly, are materials of recent times, called superconductors, that at very low temperatures, such as 230 Kelvin, can conduct freely without any resistance whatsoever. The difference comes down to nothing more than how the electrons are arranged around the nucleus. The laws of quantum physics say that there are only specific bands (or tracks) in which any electron can travel. There are some interesting facts about these bands.

First of all, only a very specific number of electrons can travel in each one; once it’s full, it’s full. Second, which track an electron is in corresponds to how much energy that electron has. And third, some of the bands are closer to each other than others. Different atoms have different numbers of electrons, and how those electrons are arranged in the bands defines whether a material made of those atoms will conduct. In every atom, the electrons get as close to the nucleus as possible, since the bands that are closest to the nucleus are also the ones that require the least energy.

That means that the outermost shell might not be completely filled, and thus an electron from a nearby atom can join this atom in its outermost shell. these moving electrons create an electrical current. therefore we can say that atoms with empty spaces in the outermost electron bands are conductors. the materials with no empty spaces in the outermost electron band are insulators. They do not let electrons flow very easily from one atom to another. Insulators are materials whose atoms have tightly bound electrons. These electrons are not free to roam around and be shared by neighboring atoms.

However there are materials that fall in between conductors and insulators. Their conductance is in between metals and insulators. And their conductance can be modified by shining a light on them or injecting charges. They’re known as semiconductors. They are mostly made of atoms that don’t conduct electricity, but they have a handful of atoms with loose electrons. Under certain circumstances — by changing things like temperature or how much energy is injected — these loose electrons will start a flowing current.

Superconductors are very different from the first three, since no material known today superconducts except at very cold temperatures. Scientists are discovering materials that do superconduct closer and closer to room temperature all the time, but no one is quite sure how that happens. However, some scientists have come up with a theory for how the very coldest superconductors work, known as the BCS theory. In such materials, at low temperatures, the atoms vibrate in a way that forces the moving electrons closer together. Normally electrons don’t like to huddle so close, since they’re all electrically negative and therefore repel each other.

But in superconductors, the electrons actually achieve almost an attraction for each other. The result is that as one electron moves, it pulls the next electron along right behind it. Electrons slip from atom to atom more easily than they ever do normally. Therefore, atoms which, at the right temperature, can make electrons attract instead of repel each other are superconductors.

In a conductor, electric current can flow freely, in an insulator it cannot. Metals such as copper typify conductors, while most non-metallic solids are said to be good insulators, having extremely high resistance to the flow of charge through them. Conductor” implies that the outer electrons of the atoms are loosely bound and free to move through the material. Most atoms hold on to their electrons tightly and are insulators. In copper, the valence electrons are essentially free and strongly repel each other. Any external influence which moves one of them will cause a repulsion of other electrons which propagates, “domino fashion” through the conductor. Simply stated, most metals are good electrical conductors, most nonmetals are not. Metals are also generally good heat conductors while nonmetals are not.

While the normal motion of “free” electrons in a conductor is random, with no particular direction or speed, electrons can be influenced to move in a coordinated fashion through a conductive material. This uniform motion of electrons is what we call electricity, or electric current. To be more precise, it could be called dynamic electricity in contrast to static electricity, which is an unmoving accumulation of electric charge. Just like water flowing through the emptiness of a pipe, electrons are able to move within the empty space within and between the atoms of a conductor.

The conductor may appear to be solid to our eyes, but any material composed of atoms is mostly empty space! The liquid-flow analogy is so fitting that the motion of electrons through a conductor is often referred to as a “flow. ” With electricity, the overall effect from one end of a conductor to the other happens at the speed of light: a swift 186,000 miles per second!!! Each individual electron, though, travels through the conductor at a much slower pace. Effects on conductance: Different conductors have different levels of conductance. Silver is the best conductor, offering easier passage for electrons than any other material cited.

Dirty water and concrete are also listed as conductors, but these materials are substantially less conductive than any metal. Physical dimension also impacts conductivity. For instance, if we take two strips of the same conductive material — one thin and the other thick — the thick strip will prove to be a better conductor than the thin for the same length. If we take another pair of strips — this time both with the same thickness but one shorter than the other — the shorter one will offer easier passage to electrons than the long one. Most metals become poorer conductors when heated, and better conductors when cooled. 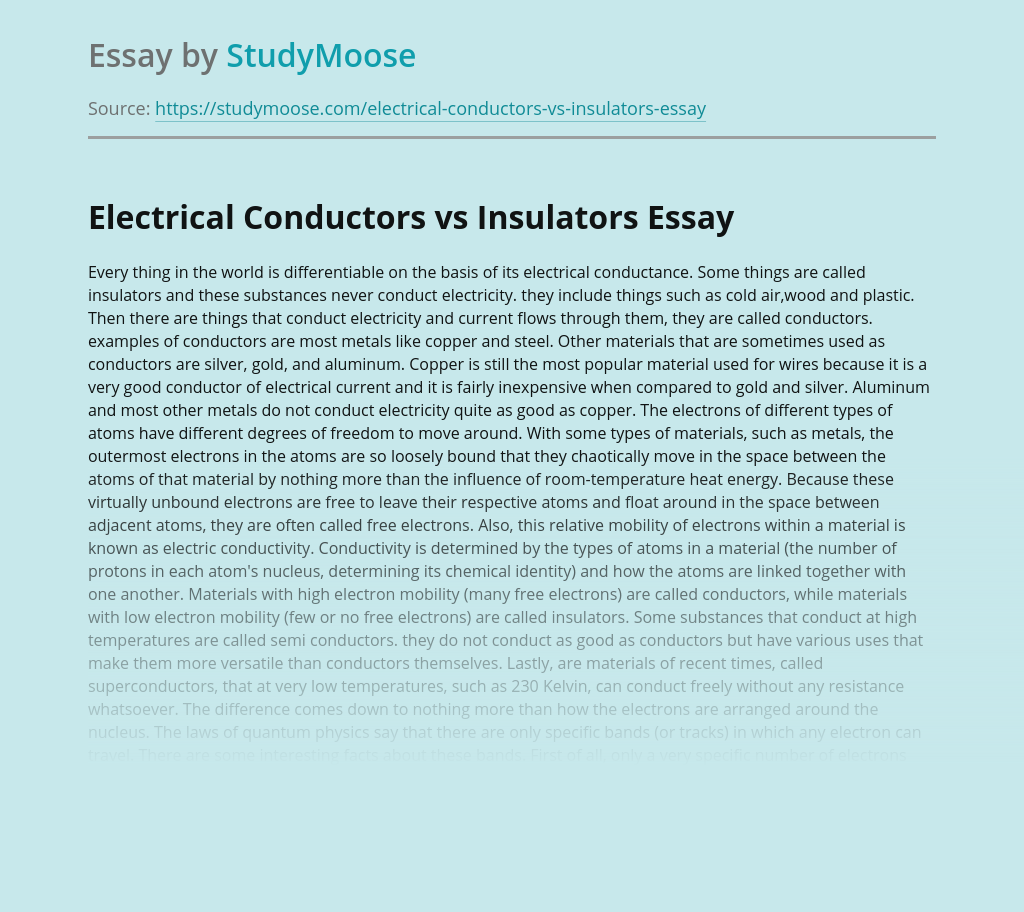 Don’t waste time
Get a verified expert to help you with Electrical Conductors vs Insulators
Hire verified expert
$35.80 for a 2-page paper
Stay Safe, Stay Original