The goal of this experiment is to build a simple electric motor and observe how it works. I will attempt to make it spin evenly by attaching it to a battery via jumper cables. The independent variable is the battery charge (1.5 V) and the dependent variable is how fast the motor spins. The lab doesn’t have multiple experiments for us to test this but I would hypothesize that the two variables would have a positive correlation: higher voltage, faster spin.

I built my tiny motor out of magnet wire, a magnet, two paper clips, a 1.5 V battery, and two push pins. I curled the magnet wire around the battery so that it was in a coil shape, then pulled the ends out so that it had tails. Then, I used sandpaper to manipulate the clear coating on the ends of the magnetic wire. The paperclips were bent so that they supported the tails of the magnetic wire, or “armature arms”.

I had to use small pliers, an extra material, to accomplish this. I used an old textbook as a support base to conduct the rest of the experiment with. The paperclip stands were fastened to the base with the two push pins.

Next, I put the magnet directly under the coil, and attached two jumper cables to each end of the battery holder, with the other ends of the jumper cables attached to the armature arm supports. I gave the “motor” an initial spin to see if it worked, and it actually started spinning on its own a bit.

The paperclips were a little lopsided so it only went a few turns though. I was unable to get it to run in reverse.

I would say that my results conform to modern theories of physics and that my results support my prediction in that I did indeed get my motor to work, even if it was less than ten seconds. I didn’t conduct the experiment with multiple batteries so I can’t see if a higher voltage would have caused it to spin faster though. For all the time building it I wish it would have worked out better though… Honestly, I probably just messed up the construction somehow but other sources of error could be the positing of the magnet, types of materials used (metal type, density), or placement of jumper cables of armature supports.

There were some issues getting the battery to work. In theory I was hoping for the fan just to start spinning. I had to tap the fan to get it moving, which it would for a second it would spin, and then stop, I repeated this several times but I couldn’t get it to go consistently. It would not spin in reverse, even with my tap.

The experiment supports my hypothesis, which stated the battery would cause the motor to spin. However it did not spin the way I imagined. This could have been due to the sources of error. 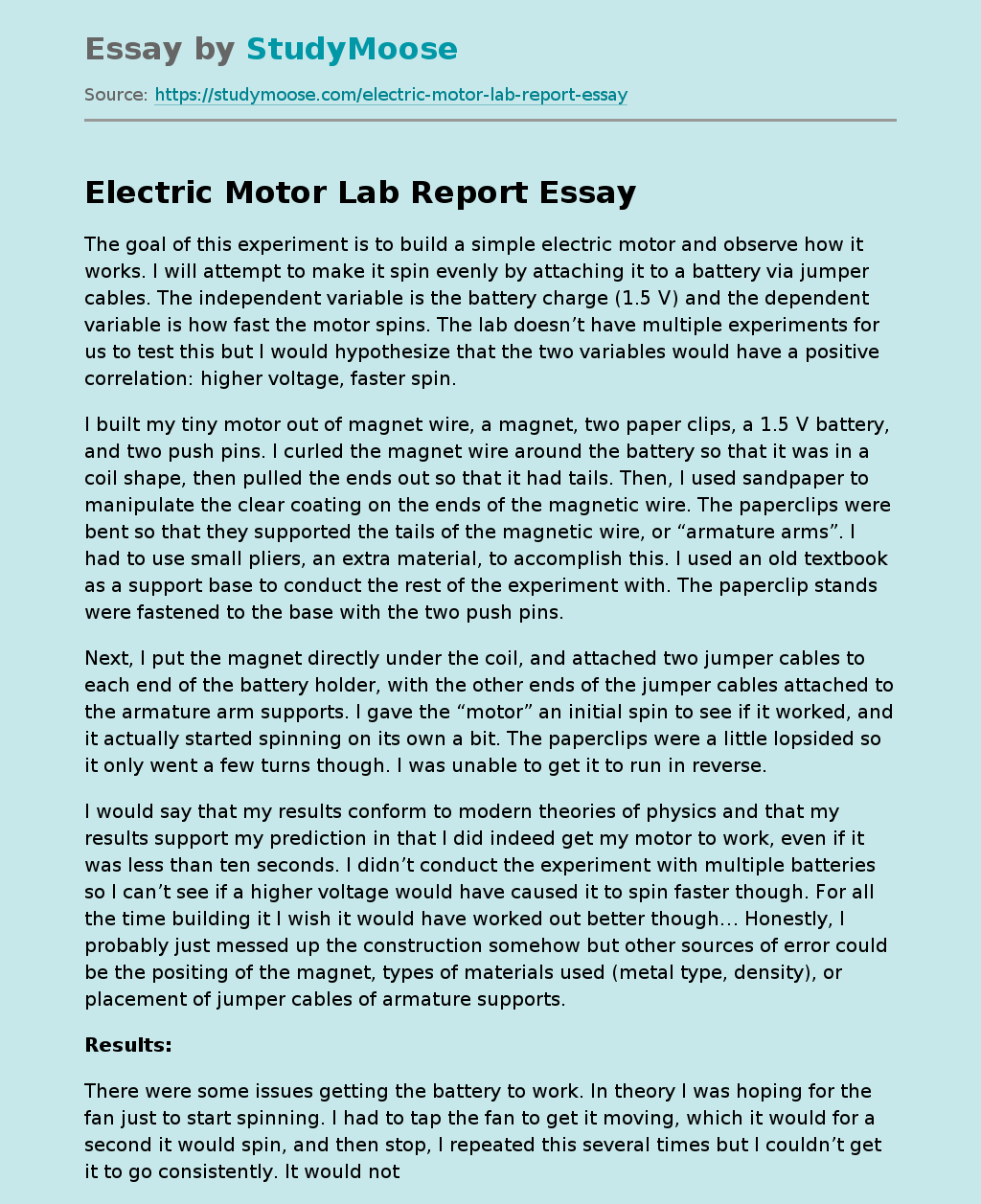