The macroeconomic environment that Starbucks operates in is characterized by the ongoing global economic recession, which has dented the purchasing power of the consumers. However, market research done in the last few months has indicated that consumers have not cut down on their coffee consumption and instead, are shifting to lower priced options. This means that Starbucks can still leverage the buying power of the consumers in a manner that would give it a significant advantage over its rivals by offering cheaper alternatives.

Don't use plagiarized sources. Get your custom essay on
“ Efforts of Starbucks Company in Stable External Environment ”
Get custom paper
NEW! smart matching with writer

Apart from this, Starbucks has already made some moves to jump on the emerging mobile computing revolution by tying up with Apple to introduce discounted coupons in the apps used in the iPhones. Further, this exercise has also been accompanied by co-branding and cross selling which means, that Starbucks is well placed and poised to reap the benefits of the Smartphone revolution. Having said that, it must be noted that consumers in the United States are increasingly turning “Ethical Chic” which means that the products they buy and the brands they consume need to prove that they are following social and environmental norms in their manufacture.

This is the key challenge that Starbucks faces as it confronts the emerging challenges of the new era of consumer awareness and the galloping Smartphone revolution.

The key political imperative that Starbucks faces is the concerns over sourcing of its raw materials that has attracted the attention of the politicians in the West and in the countries from where it sources its raw materials.

This is the reason why Starbucks is keen on adhering to social and environmental norms and to follow sourcing strategies that are appropriate and in conformance to the “Fair Trade” practices that have been agreed upon by global corporations and the governments of the developing and the developed countries. The other political imperative that Starbucks faces is the need to adhere to the laws and regulations in the countries from where it sources its raw materials. This has been necessitated because of activism and increased political awareness in the developing countries, which form the basis for Starbucks’ sourcing strategies. The third political imperative, which Starbucks faces, is the regulatory pressures within its home market in the United States because of greater scrutiny of the business processes that multinationals based in the US are now subject to.

The foremost external economic driver for Starbucks is the ongoing global economic recession, which as explained in the introduction has dented the profitability of many companies. However, studies have shown that consumers instead of cutting down on their coffee consumption are shifting to lower priced alternatives which is an opportunity for Starbucks. Of course, the company still has to contend with rising operational and labor costs as the inflationary macroeconomic environment coupled with the falling profitability is squeezing the company from both ends of the spectrum.

Though Starbucks can offer cheaper alternatives as mentioned previously, it has to do so without sacrificing the quality and this is the key socio cultural challenge that the company faces as it expands its consumer base to include the consumers from the lower and the middle tiers of the income pyramid. Apart from this, the “green” and the “ethical chic” consumers who fret about the social and environmental costs of the brands they consumer means that Starbucks has to be cognizant of this trend. Third, the retiring baby boomer generation means that spending by the older consumers is likely to taper off and hence, Starbucks would have to lookout for tapping the Gen X and the Millennials as part of its strategy.

Starbucks is well poised to reap the benefits of the emerging mobile wave and as it has tied up with Apple to introduce app based discount coupons, it can expect to ride the mobile wave with ease. The company has already introduced Wi-Fi capabilities in its outlets so that consumers can surf the web and do their work while sipping coffee. This is indeed an added value to the Starbucks brand and something, which enhances the consumer experience. It can also introduce mobile payments and this is something that it is already testing out in pilot locations in the United States.

Starbucks has to ensure that it does not run afoul of the laws and regulations in the countries from which it sources its raw materials as well as the home markets in the United States.

There have been several concerns about the business practices of Starbucks from the activists, international advocacy groups, and from the consumers themselves. Therefore, Starbucks has to take into account these concerns if it has to continue holding on to the trust it enjoys with its consumers.

The preceding analysis proves the point that Starbucks is operating in a relatively stable external environment. The main reason for this is the fact that it operates in the Food and Beverages space which means that despite the recession, consumers cut down on the consumption to a certain extent and not completely. Therefore, the task before Starbucks is to lower costs and increase the value so that it retains its consumer base and attracts consumer loyalty.

Efforts of Starbucks Company in Stable External Environment. (2016, May 08). Retrieved from https://studymoose.com/efforts-of-starbucks-company-in-stable-external-environment-essay 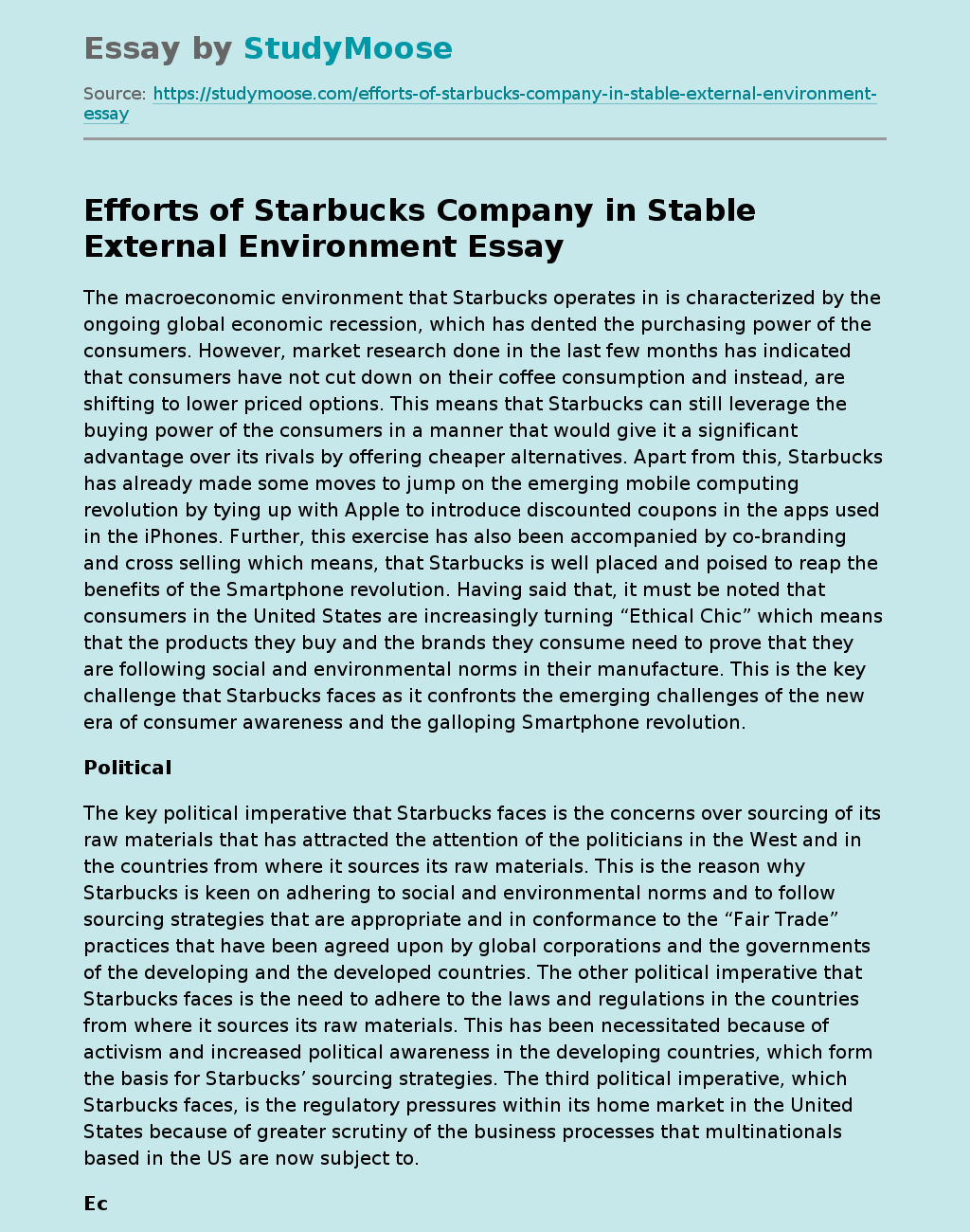