Effects of reality tv on teens

Although reality TV is fascinating and full of drama, it still has an enormous effect on today’s youth. Throughout the years reality TV has become popular and it has attracted different age groups. But one group that reality TV attracts would be teens. Now I am not talking about all teens, but some teens do look at the actions of the television stars and think what they’re doing is “amazing”. When teenagers watch reality shows it opens their eyes to a lot of sex, vulgar language, and drugs.

Turn in your highest-quality paper
Get a qualified writer to help you with
“ Effects of reality tv on teens ”
Get high-quality paper
NEW! AI matching with writers

Allowing teens to be exposed to this much disapproval behavior is dangerous and can later bring problems later on in life. My best friend younger sister, who is fifteen, is starting to live the life of a reality star. She wakes up early for school, tired, from the previous night. She enjoys staying up all hours of the night just to be able to catch her favorite show, “The Bad Girls Club.

” Wanting to be free, and doing whatever she feels like doing. Saying anything she wants to whomever, going out partying with all her friends, open to try drugs (weed), ready to try and have sex.

At a young age she wants to do everything like these “bad girls” do. Is it healthy? No, going out every weekend and partying is making her tired. All this “freedom” that she’s getting is making her not want to study for school. But watching these reality shows isn’t healthy for a fifteen year old.

According to Mullings “The impact of heavy television viewing and the effects it has on young viewers has been a dominant topic since the 1960s. With the ever-changing landscape of television programming, reality television has become increasingly popular, especially among the pre-teen and teen audiences” (Mullings) Body:

What exactly is reality TV? Well, according to LiveStrong “reality television consists of programs which purport to showcase people appearing as themselves in a variety of different contexts. Many reality programs revolve around competitions; others feature celebrities in their everyday lives.” For example “Jersey Shore” is about these Italian New Yorkers that only cares about partying and having sex. Another example would be “The T.I and Tiny Show” these two open their home to the public eye to see what they do and how the act on a daily basis. I am not saying that all reality shows are horrible or not healthy for you, but some of the shows that they do play on television aren’t safe for young people eyes. Although there are pros and cons to watching reality TV, the pros seems to outweigh the cons. Teens that view shows like Teen Mom, Jersey Shore, or even Real World expect that maybe they can do the exact thing the reality star does.

Beyond the reality shows teens, preferably girls, connects reality shows with social media. The teen girls go out partying, just like the reality stars, and spend majority of the night taking pictures of them and their friends. Just like in “Jersey Shore”, when Snooki and J-wow, goes out to a club it’s always about “selfies1” and when it is the right time to post the picture on social media.

Effects of reality tv on teens. (2016, Mar 01). Retrieved from http://studymoose.com/effects-of-reality-tv-on-teens-essay 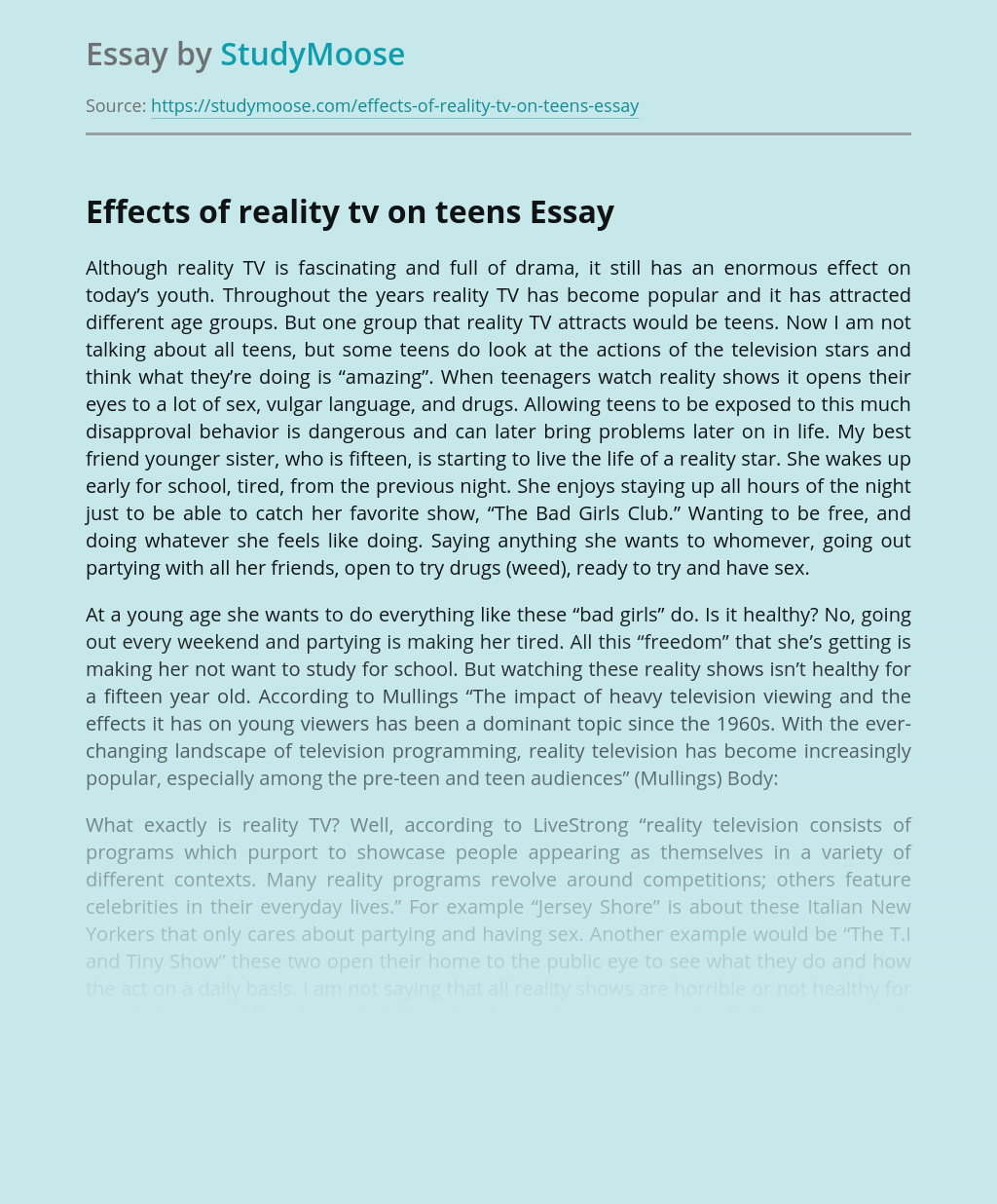 Turn in your highest-quality paper
Get a qualified writer to help you with
“ Effects of reality tv on teens ”
Get high-quality paper
Helping students since 2015
Stay Safe, Stay Original