In researching the topic of cyber-bullying, I was not aware that texting is also considered a part of cyber bullying. According to stopbullying.gov there are multiple ways someone could be bullied over the internet. These include, sharing nude photos, spreading lies and face accusations, bullying for not having a lot of money, creating a false identity online and taking advantage of others, bullying for being gay, jealousy bullying, encouraging self-harm or suicide and online gaming bullying where someone could post another person’s personal information such as address or phone number to the public.

Don't use plagiarized sources. Get your custom essay on
“ Cyber-bullying in Teens Ages 13-17 ”
Get custom paper
NEW! smart matching with writer

Even though I have seen some of the news reports on cyber-bullying it is still sad to think a teen could do this to another person. For example, encouraging suicide, I don’t see how any person would be able to say, or type, words of encouragement for someone to take their own life. In an article written on December 8th, 2018 by Amy Rock titled “Bullying Statistics Every K-12 Teacher, Parent and Student Should Know”, only about 11.

5% of all bullying of children ages 12- 18 occurred online or through text. Although a study done in 2017 by Justin Patchin reveals that “about 28% of the students (middle and high school) … have said they have been the victim of cyber-bullying at some point in their lifetime. The website Dosomething.org has said that “68% of teens agree that cyber-bullying is a serious problem”. I am curious to conduct my own research and find out if these teens think cyber-bullying is a problem because the media is telling them that it is or because it is actually occurring.

From the research I have seen the researchers seem to be getting a bit different statistic from one another. This could be due to children not wanting to admit they have been cyber bullied or maybe it could be relative to where they are doing the research. So, my research will only be a small representation of the area in which I live. Also dosomething.org reported that girls are more likely to be cyber-bullied than boys. I am interested to see if this is the case that I find with my research. All of the research is consistent though in that traditional bullying or bullying done in person is still more prevalent than cyber bullying. I find this a little strange, only because all of the coverage on cyber-bullying would lead some to believe that it is occurring more or more of an issue than traditional bullying. I know there are places and people that take a stand on bullying as a whole but most if the articles or news reports or ads I see about bullying are a majority about cyber bullying and I cant help but think that maybe if we looked at bullying as a whole it might be better suited for the students who are being bullied especially because traditional bullying is still more of an issue these days.

After researching this topic and learning a little bit more about it I think that cyber-bullying won’t be as big of an issue as it has been portrayed in the media. I would say less than 15% of the teens I will research will have been cyber bullied in their life. I do think that there will be more girls than boys that have been a victim of cyber bullying because from experience, girls are sassier and can become more jealous than boys. I do not believe that bullying because of race or sexuality or money will be very prevalent in today’s teens because I do think we have one a good job of creating a generation that is more open minded and I would like to think more accepting.

The best way to get honest answers about a topic that is touchy or emotional in my opinion would be to do an anonymous survey. This way the teens can answer without fear of being judged or embarrassed. I have decided to create a survey and have my sister who is a sophomore in high school pass some out. I am also a nanny and the oldest two children are 14 and 16 and although they are homeschooled, I thought it would be good to see their perspectives and also, they participate in quite a few activities outside of schools, so I will be passing them out there too. All together I am hoping to get 50 surveys completed for children ages 13-17. I have asked mt sister to hand out 15 to girls and 15 to boys. I will then have 10 girls as 10 boys complete the survey, so we will have an equal number of male and female participants. Here I will attach a sample of the survey.

All of this information is anonymous and is strictly for a research paper.

Other (please elaborate below)

Thank you for your time and honesty!

I was able to get all 50 surveys back with the help of my sister and the children I nanny! I also was able to get half male participants and half female. Getting the teens to fill out the survey wasn’t as hard as I thought. They were very willing and helpful. I think the fact that I kept the survey short and to the point was helpful. In my hypothesis I said that less than 15% of the teens I surveyed would have been cyber bullied and I was proven wrong. in my research 28% of participants said they had been cyber bullied before. I also hypothesized that more girls would have been cyber bullied than boys and that came out to be true. Of that 28% that had been cyber-bullied, 36% of those were male and 64% were female. Something I didn’t expect was that males in my research were actually more likely to have cyber-bullied someone else than females.

In total 14 teens said they had been victims of cyber bullying and of that 14, no teens said nude photos or social class had anything to do with their being bullied. Race, sexuality and other (specified to be appearance) all accounted for 7% each. Threats accounted for 14% and rumors had the most with 64%. I hadn’t put appearance as one of the options for reasons of being bullied but looking back I would have because I think that is an important one and I’m glad one of the teens was willing to write that under the “other” option. I didn’t expect there to be that many threats and even though the numbers are on the low side, I am saddened to see that race and sexuality were reasons for bullying at all in todays day and age.

Although I still believe that the media makes cyber bullying out to be a bigger than it is, it is definitely still prevalent in todays teens and more so than I imagined. I do think that these results would very from place to place especially when it comes to race and sexuality. Although I was saddened to see them make an appearance in my research, I’m also sure that if I were to pass out this same survey in somewhere like the mid- west or a town with limited exposure to different cultures and sexuality that those reasons might be higher up on reasons to be bullied. Girls are still being cyber bullied more than males and according to my research it might be some of the males who are bullying the females. In my opinion this has to change, and it needs to be brought to attention that some of the teenage males are the ones making teenage females feel bad about themselves. We still have quite a way to go to improve cyber bullying and bullying in general but there seem to be awesome programs for children and families. There is ample research that has already been collected on this topic and is continued to be collected. I think that the message that cyber bullying is real and is not okay has been spread well but what might be good is to look at some of the reasons the teens are being bullied and tackle those. Help teens see that making fun of someone’s race or sexuality and spreading nasty rumors is not okay and how it affects others. 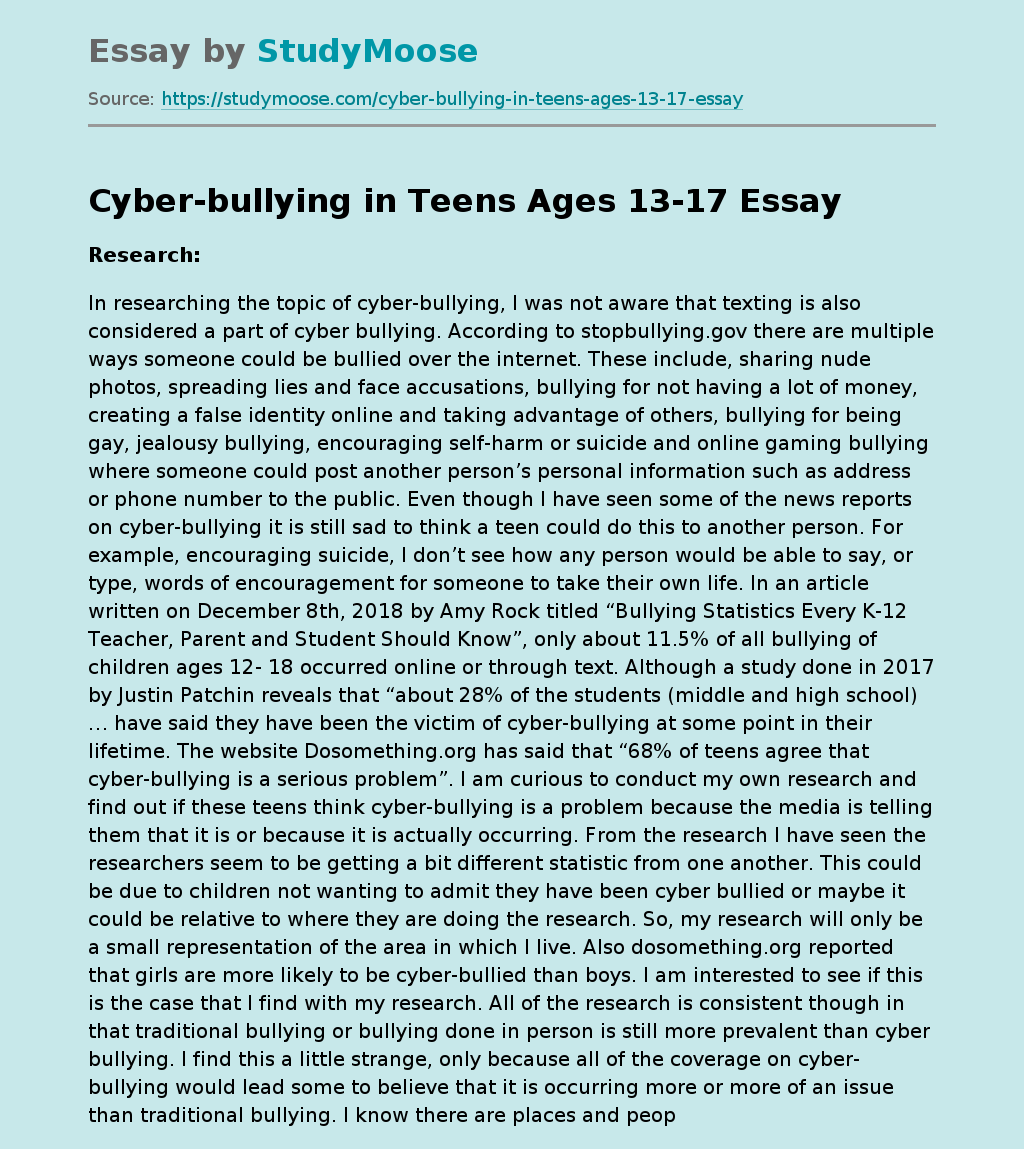