Effect of Institutional racism on

Racism is the discrimination or negative attitude of people against other people purely because of their race. Institutional racism is a form of racism structured into political and social institutions. The institutions include schools and collages, while political include government and other government Parastatals or corporation. The consequence of this kind of social segregation is always negative. It some times leads to wars, hatred and in some instances low self esteem by the subject in this case.

Racial discrimination stated long ago and its effect has always been negative.

Don't use plagiarized sources. Get your custom essay on
“ Effect of Institutional racism on ”
Get custom paper
NEW! smart matching with writer

In page 3 of The Guardian that is dated 5th September 2008. The heading of the newspaper is: “Black Caribbean children held back by institutional racism in schools, says study” written by Editor Polly Curtis. The essence of the story in this case is to highlight the rampant racial discrimination of Caribbean children in English schools.

This has largely undermined their academic and social life, further researcher had uncovered evidence that teachers routinely under-estimate the abilities of some black pupils, suggesting that assumptions about behavioural problems have overshadowed their academic talents.

The findings on a survey which tracked 15,000 pupils through their education also add weight to the theory that low achievement among some black students is worsened because teachers don’t expect them to succeed.

This relates well to the topic of Institutional racism because in this case racism is in a school setting where all pupils are supposed to be treated fairly irrespective of their race. But in this case black Caribbean’s are discriminated upon and this has subsequently resulted to their poor performance in school.

Such as a third of capable black Caribbean pupils are not entered to take the hardest papers in tests at 14. Hence the issue being addressed by this statistics is institutional racism in English schools. This story affects me in different ways, its sad to note that at this age people are still being judged by the color of their skin rather than by their character and abilities. It frustrates me to hinder other people from achieving their full potential because of racism.

In my point of view, its vital to note that none of us decided their race and that all humans are created equal and their variation in melanin content should never be a judgment factor but rather an ideology of the past. It’s vital for people to know that our abilities, talents are independent of our skin color. This story not only affects me but it also affects the society involved because they loose potential people in from optimizing their potential because of their unworthy discrimination of their color.

This story encourages me to do something different by advocating against racial discrimination not only in schools but rather in the entire society. I will accomplish this by giving examples of how people of different races have won the Nobel peace price. Whites, Blacks, Asians have won the price. This vehemently states that the color of our skin has nothing to do with our ability. Sources Polly Curtis, Black Caribbean children held back by institutional racism in schools, says study The guardian newspaper on the web 5th September 2008 <http://www. guardian. co. uk>

Effect of Institutional racism on. (2016, Sep 24). Retrieved from https://studymoose.com/effect-of-institutional-racism-on-essay 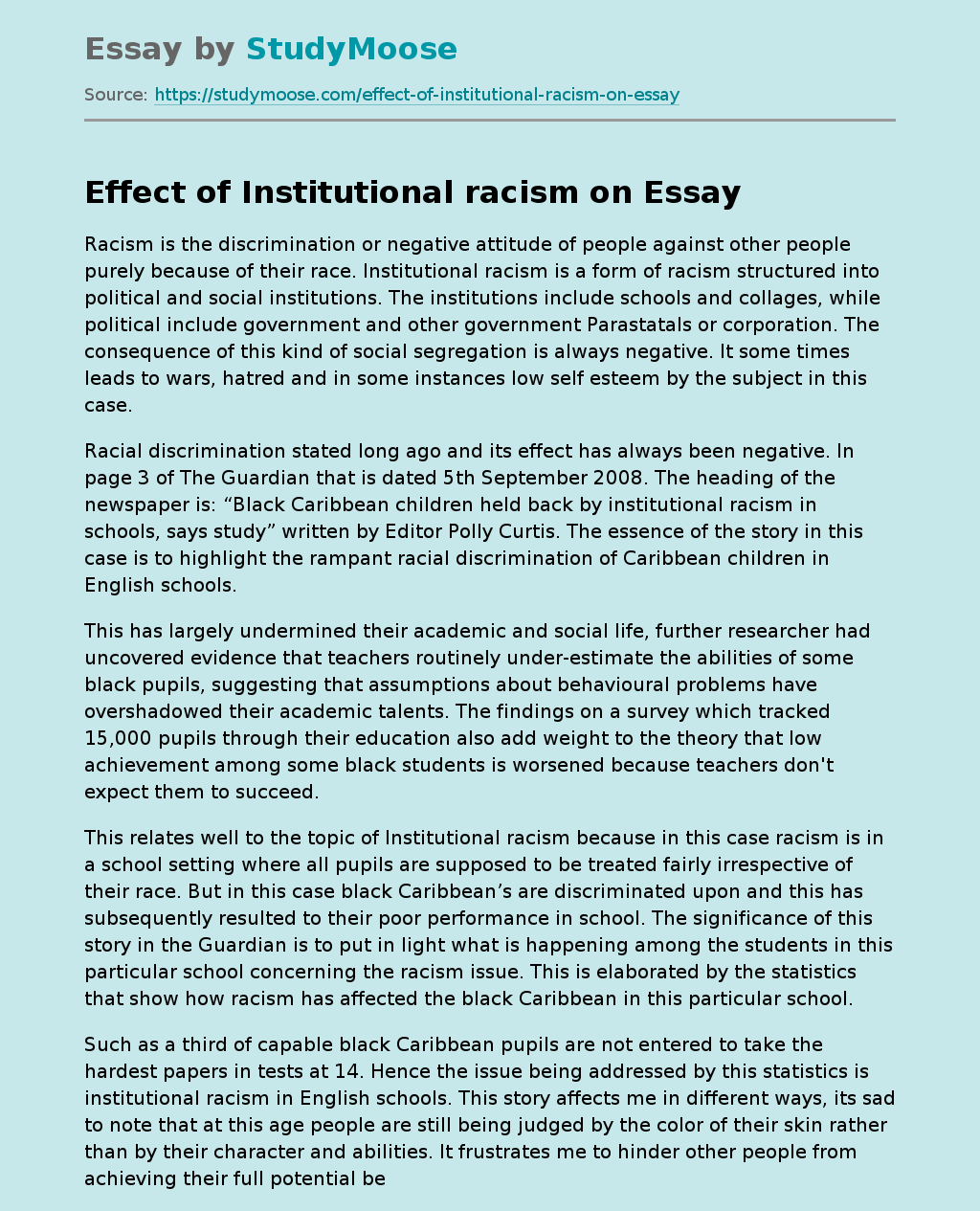