There are 1.8 million people coming to the United States every year. According to U.S. census estimates, in 2006 there were 961,113 Americans of Ukrainian descent representing 0.33% of the American population. The Ukrainian population in the United States is thus the second largest outside the former Soviet Union. One of the reasons is that the education is more progressive and flexible, which makes it easier for people to attain their educational goals. In different countries and in different cultural environments, education has different forms, methods and meanings for people.

Don't use plagiarized sources. Get your custom essay on
“ Education: United States vs. Ukraine ”
Get custom paper
NEW! smart matching with writer

Given the opportunity to attend schools in Ukraine and in the United States, I could not help but notice the differences between the two educational systems. The U.S. educational system is more liberal, comprehensive, and specialty focused when compared to the Ukrainian system. The educational system of Ukraine is continuously changing due to the transitional period of the country from the former Soviet Union.

During the Soviet period, educational organizations in Ukraine were state-supported institutions, none of which had religious affiliations.

As cultural environment changes, this is no longer true for the modern Ukraine. Nowadays, all schools, from pre-school to the institutions of higher education, have Christian classes in their curricular activities. Contrary to the state-sponsored education of the Soviet era, there are both public and private educational establishments, all of which must be accredited by the Ministry of Education of Ukraine. Primary and secondary education comprise pre-school through grade 11.

The components of primary level of education are pre-school programs which are attended by two-third of all Ukrainian children.

Postsecondary education includes non-degree programs that lead to certificates and diplomas plus six degree levels: associate, bachelor, first professional, master, advanced intermediate, and research doctorate. The U.S. system does not offer a second or higher doctorate, but does offer postdoctorate research programs. Contrary to the Ukrainian system, in the United States people can go to college at any age and also have homeschooling programs. The most common grade scale in the United States is the letter grade: “A” through “F”, which is derived from a scale of 0–100 points. The following table shows the transformation: A| B| C| D| F|

One of the big differences between two systems is course schedule. In Ukraine students have to follow a particular schedule made to satisfy the educational institution program, while in the United States students have flexibility in scheduling their classes. For example, if I start any level of secondary or postsecondary education in Ukraine, I will be assigned to a group of 20-30 people (called a “class”), who have the same schedule and we don’t have to register for any classes, because everything is already prepared for us. Nowadays, in US I make my own schedule that satisfies my choice of degree requirements and my work hours. Another big difference is the availability and accessibility of technology to students. In Ukraine, schools and colleges are very underfunded which results in poor or no equipment.

Students in Ukraine do not have as many resources as students in the United States have, unless they come from wealth. Some people say that lack of technology lowers the quality of education. I believe the use of technology is helpful, has a significant positive effect on students and is just more fun; however it does not affect the quality of education. Taking into consideration all the similarities and differences of both educational systems, the Ukrainian system dictates to students each step of the educational process, while the US system is more flexible, provides more freedom and advanced technology. Overall, learning in the United States is a great opportunity that not everyone has. Thus, those who have it should make the most of the chance to learn. 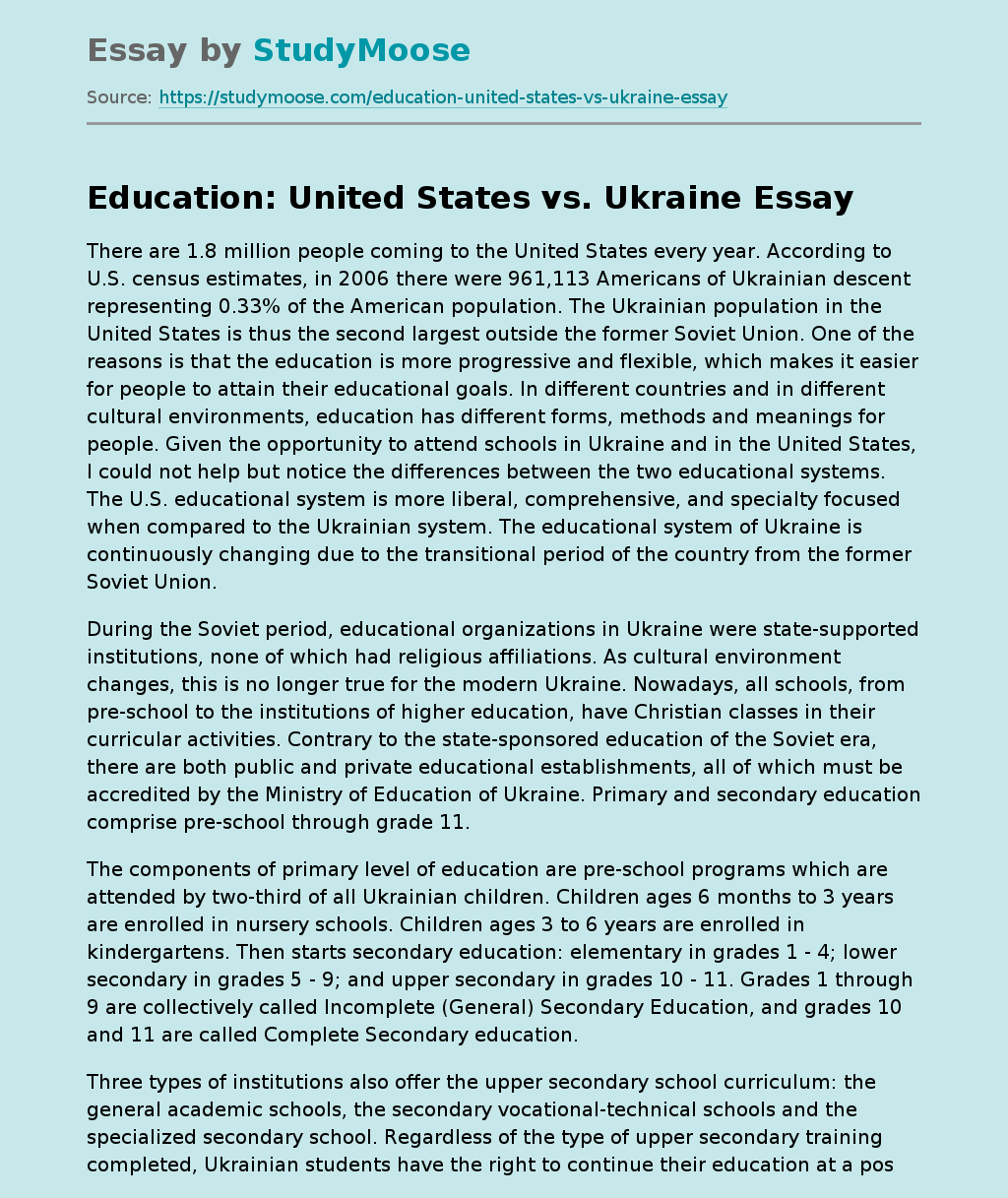