About 200 million years ago (mya), New Zealand (NZ) was once part of a supercontinent called Gondwana. New Zealand began to split away about 80 mya, carrying with it many primitive plants and animals. The fauna and flora became isolated by the surrounding ocean for a very long time, that eventually they evolved into new species (e.g. Moa and Kauri). (Goldberg, Trewick, and Paterson, 2008). After millions of years, Nearly eighty per cent forest-covered NZ landmasses, with a range of diverse ecosystem and unique biota.

Don't use plagiarized sources. Get your custom essay on
“ Ecological Restoration ”
Get custom paper
NEW! smart matching with writer

However, the arrival of humans and especially the introduction of mammalian pests have had a detrimental impact on the range of unique ecosystems and fauna on New Zealand and associated off-shore islands. Many native and endemic species are now extinct or critically endangered. (Hatton, n.d)

New Zealanders become more concerned about protecting and preserving the native flora and fauna in the 1800s, which was the beginning of ecological restoration sites. Ecological restoration means repairing damaged ecosystems; the idea is to restore the all-natural process that keeps habitats alive and healthy.

(Hatton, n.d). For much of the last century, off-shore islands such as Kapiti Island were main ecological focus due to isolation from other terrestrial habitats. Predator control let native biodiversity to recover and has provided opportunities to translocate native populations that are endangered. Since the considerable success of eradications on the main island, restoration attention focused mainland is controlling invasive species then eradicate. (Martineau, 2010). Bringing the concept of “Mainland” sanctuaries where borders can be a physical structure such as a predator-proof fence, for example, Zealandia or an area under intensive pest control for example Ark in the Park.

All ecological goals are to restore an ecosystem in order to create sustainable habitats for unique wildlife.

Kapiti Island is a 10km long and 2km wide predator-free sanctuary covering almost 2000 hectares. This island has a long history of human, and become a victim of intensive exploitation as its natural resources were stretched to their limits. Before human settlement, tall, dense forest covered most of the island. The vegetation was robust and healthy, mostly of trees including rata, kahikatea and rimu. The rimu an essential representation of coastal-lowland podocarp forest and Kahikatea forest would dominantly present wetlands also, on the western cliffs occupied by coastal shrublands. (Brown, 2016). Estuaries habitat, wetland inland and strands of lowland podocarp forest that studded the floodplains would have been swarming with fish, eels and birds even with the presence of a small population of Maori which occupied the land. The only impact then cropped which but little pressure on the land resource but not enough to degrade the forest.

However, when Ngati Toa invaders seized the island, increasing population and need for food, resulting in clearing new areas for crop and settlement. They took over the island, installing five whaling stations encouraging European traders and whalers to visit bringing with them rats, cats, cattle, pigs, and goats changing the islands landscape and ecology further. Whaling began to decline during the 1840s, which in turn increased farming. They burnt more substantial areas of forest for pasture in the purpose of farming which continued till the 1950s. Only bush in the centre of the island was left to regenerate as it was too steep to stock.

Eradication programme began in 1911 when the government identified that goats were damaging the forest on the island. Over 2000 goats were removed in 1928, following cats in 1935. For the eradication of possums, an intensive control programme took place from February 1980 to December 1986. The main methods involved in the eradication of possum was Ariel application was carried out using carrot baits with 1080, the carrots were dyed green to make them less attractive to birds. (Sherley, 1992). Accounting for about 1500 possums. Another method was modified traps which were bird-proof, especially against the little spotted kiwi, there was a total effort of over one million traps resulted in the removal of almost 2000 possums. In 1986, dogs were used in the final stage of the eradication to hunt the last remaining possums becoming the first off-shore island to eradicate possums completely. (Sherley, 1992). In 1996, the kiore and norway rat were removed by ariel and hand spreading of cereal baits laced with pesticide brodifacoum after the eradication invertebrates population did not increase but rather decline this possibly could due to native birds realised from rat predation, the competition was more active on invertebrates. (Sinclair, 2005, Innes & Saunders, 2011). There was a tremendous increase in flora and native birds numbers, enabling the success of the translocation of tikeke and kokako. (Brown, 2016).

Although island all mammalian pest, there is still a concern for re-introduction. The current measures in place for reducing the risk of rodent re-invasion is ensuring visitors check bags and equipment for rodent before boarding boat. As the first line of defence, there a permanent bait station containing rodent bait in areas that are assessed as high risk for rodent invasion on islands and the neighbouring island. These are checked regularly. Once a year, a rodent audit is undertaken, using a tracking tunnel to identify any animal prints If the rodent is detected, a Contingency and Surveillance Plan is in place to respond.

Since the successful eradication of mammalian pest, there was a notable rapid recovery of flora present such as Dysoxylum spectabile (Kohekohe), rata and fushsia. The success of this recovery enabled the translocation of native plants and animals species formerly present in the lowlands of the southwest North Island and the islands of the northern South Island.

Zealandia is the world’s first urban sanctuary located on the outskirts of Wellington, New Zealand. The sanctuary covers a section of 225 hectares of regenerating forest, enclosed within a predator-proof fence. Long before the arrival of humans, this sanctuary was home to a range of forests, the predominant lowland forest such as broadleaf and podocarp forest flourishing with massive remnants such as Rimu, Matai,

Miro and Kahikatea. (Gilkison, 2004; Blick, 2008). However, in the mid 19th centaury the European settlers created large fires to completely strip the valley of vegetation until it was denuded which was done for farming and other purposes.

The valley was mainly farmland, except for the western slopes section as was unsuitable for grazing stock allowing that section of the forest naturally regenerates. Pioneers planted Pinus radiata (radiata pine) in areas not used to replace the over three-hundred-year-old trees as back then people needed wood for fuel planting the pines gave an unlimited source of fuel. Now of days pines are not useful except for timber but still have continued to remain in the sanctuary to present as it provides height for the forest and some species such as kaka and native falcon which need that height.

Also, when, pine tree falls, it becomes a good food source for kaka who like to rip into the tree. Farming eventually came to an end in the early 1990s turning into a water reservoir. The construction of the earth dam (lower) began in the early 1870s which was used to supply water to the city, but water later found to be insufficient due to the rapidly and increasing city population, leading to the construction of the gravity arch dam (upper) in 1908. Both dams were decommissioned for safety and a new source of water. (ZEALANDIA, n.d). The early owner at the time began replanting broadleaf podocarp forest including Kahikatea, Matai, Rimu, Rewarewa to centre around the dams to regenerate the forest. However, due to browsing pest such as possums have prevented some species of plants from flourishing, this regenerating forest is seen today. (Gilkison, 2004). The forest is only over a hundred years old, therefore is still undergoing succession and will take another hundred years before reaching full potential growth.

The bird and forest society identified the passive space to be large enough habitat for a self-sustaining ecosystem that could support a wide variety of native fauna and flora, Jim Lynch developed a radical plan for the valley, fenced it off, eradicated introduces pest and established a sanctuary that will protect native and endemic biodiversity.

Construction of Fence and Eradication Programme

A step into restoring the sanctuary was removing mammalian pest to enable native species to thrive. An eradication programme was targeting rodents, cats, possums, mustelids and rabbits. Three months of using bait stations, traps, and ariel and hand were spreading cereal baits laced with pesticide brodifacoum then another three months of monitoring involving bait stations and tracking tunnels the sanctuary was officially declared pest-free in the 2000s. (Zealandia, n.d). The process of re-introducing NZ native and endangered species was the beginning progress to a self-sustaining ecosystem.

There is a network of wooden boxes throughout the valley. They are used as a tracking tunnel to check for pests such as rats and stoats. If a pest is detected the box can be used as a bait station or cover for traps to kill pests. The boxes are designed to keep birds safe. There mesh covers over the ends to stop birds going into them when traps or poisons are being used. Also, there are supplementary feeding stations for birds such as Hihi, Bell-bird and Kaka. (Zealandia, n.d). The purpose of feeding stations is because birds tend to build their nests close to a good and reliable source of food. The feeding station in the middle of the valley ensures a higher chance of them building a nest nearby which by default inside the safety of the fence.

Volunteers are essential for the sanctuary, as over the years locals and many community organisations have given their time and energy to the cause of the conservation. They do weeding, biosecurity monitoring, restocking bird feeders, track and fence maintenance. They are looking after the infrastructure that keeps Zealandia running and prevent the entry of mammalian pest.

Over the years Zealandia has achieved some great success in eco-restoration. After the construction of fence and eradication of pest, although abundance is unchanged in for mature trees, there has been an increase in abundance of seedling and sampling, suggesting browsing animals were preventing smaller plants from flourishing. (Blick, 2008). Now without browsing mammals, the hundred years of regenerating forest are slowly returning to its former glory. With forest on the rise, there have been over 20 species of fauna have been reintroduced and successfully establish. The original forest is now a flourishing broadleaf podocarp forest which acts as a productive food source or all nectar and berry feeding birds. There has been a tremendous rise in fauna abundance, especially the birds as Native birds such as Tui and Kereru which were extremely rare, are becoming common to sight around the central city. While other vulnerable species such as little spotted kiwi, Tuatara, and Tieke abundance are thriving within the valley. (ZEALANDIA, n.d). These results display a successful step to a self-sustaining forest. 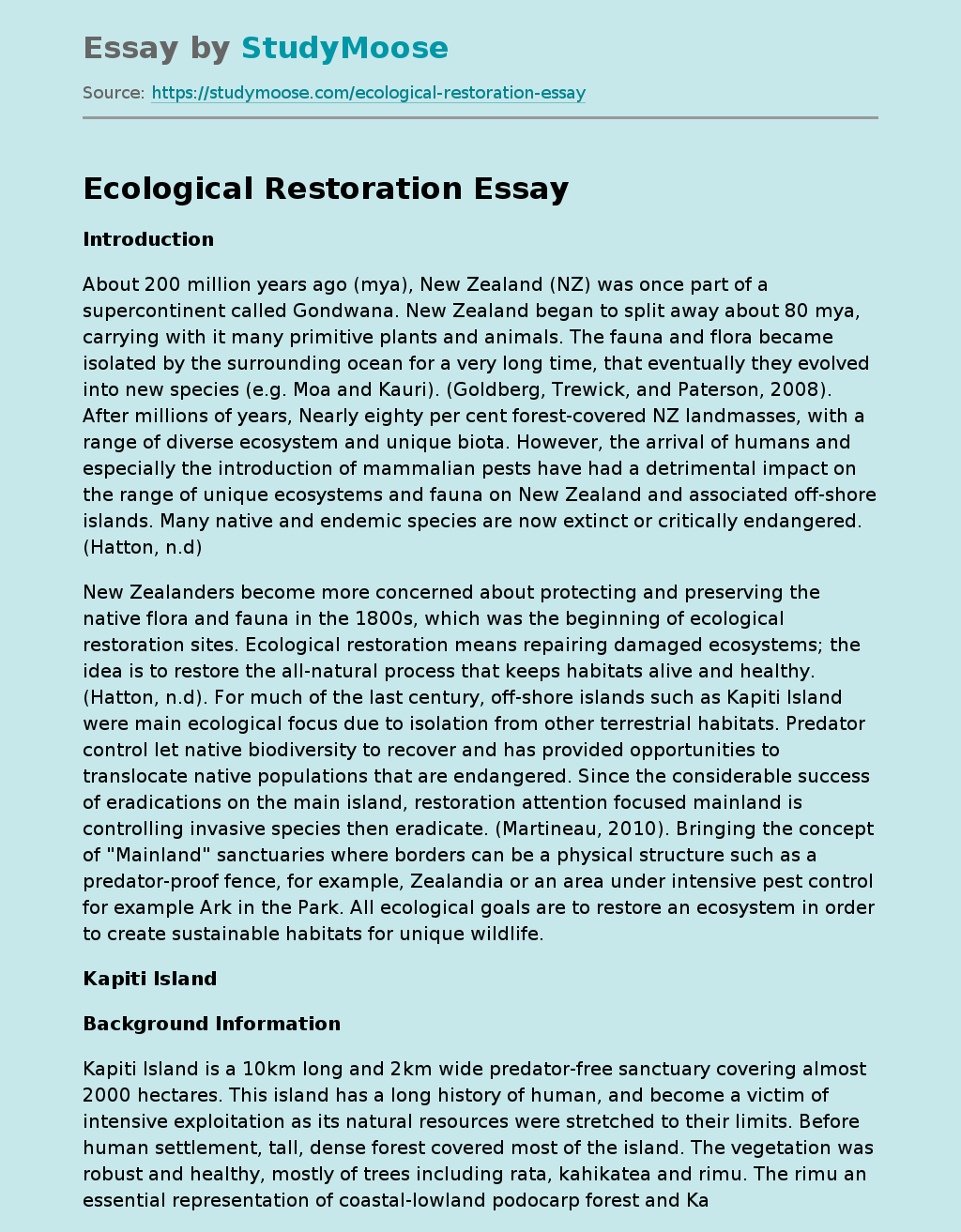