The seven continents are the seven main land areas on the Earth. Some are joined to each other, and some are completely surrounded by water. Some continents have a lot of countries, but others have only a few. Erin Ate Nine Sticky Apricots At Aprils. If you can remember this mnemonic device called an acrostic then it is easy remember all Continents names as the first letter of each word corresponds with the first letter of a continent. These continents are: Europe, Asia, North America, South America, Australia, Antarctica, Africa! Interestingly the names of all the continents end with the same letter with which they start.

Don't use plagiarized sources. Get your custom essay on
“ Earth Is Precious ”
Get custom paper
NEW! smart matching with writer

It is believed that in past ,all continents were joined, this land area was called Pangaea .This area started to break up & got divided into 7 parts ,so today we have 7 continents .These continents are still moving away or moving close to each other. This is called continental drift or plate tectonics theory. For example Europe & North America are said to be moving 7 cm apart every year.

It is the largest continent .It covers one-third of earth’s surface. Also it is the biggest in terms of population in the world. Half of the world population lives here. World’s two most populous countries, China & India are in this continent. It has 30% of world land area & 60% of population

It is the birth place of great religions – Hinduism, Islam, Buddhism, Christianity It is also the place of great ancient civilizations- Chinese, Harrapan.

It is the second largest continent.
It is also called Dark Continent as for long time not much was known about this continent due to its difficult inhabitable terrain. It is the home of the Nile ,the longest river in the world.
It is also the home of the Sahara, the largest desert in the world. The equator passes through the middle of Africa continent ,so it receives direct sunlight throughout the year. So it has hot climate throughout the year. World’s hottest place Ethiopia is also in Africa continent. Africa is very rich in minerals.Ninety five percent of the worlds’s diamonds and more than 50% of the world’s gold comes from Africa. 66% of world’s chocolate comes from Africa.

Australia is home of three unique animals: platypus ,mammal that lays eggs, the kangaroo,which carries its young in a pouch,the emu ,a large bird that does not fly. Australia’s Great Barrier Reef is the world’s largest coral reef,it is made up of coral deposits & is about 2000 kilo meters long Australia is also known for its various type of Eucalyptus trees.There are over 500 varieties. Australia ‘s sheep population is more than its human population. Its sheep population is 14 times more than its human population.This is why Australia stands first in the production & export of wool in the world.

Antratica Antarctica is a frozen land area around the South Pole.It is also called “Frozen Continent” . Antarctica is the highest, driest, windiest, emptiest, coldest place on earth. Antarctica contains 75% of the ice in the world.It is estimated that ice is 4 km thick. It looks all white, that is why it is also known as “White Contnent”. Antarctica also contains about 70% of the world’s fresh water Antarctica is the windiest continent on earth.

. The water of the Antarctica is so cold that nothing can rot here. . The coldest natural temperature ever recorded in the world was in Antarctica. It was as low as –89.2°C (–129°F) .

It is believed that Europe is named originally after ‘Europa’ who was a Phoenician Princess from Greek Mythology.. In Europe , there are no deserts.It is the only continent without any deserts. Venice, the world’s smallest country is in Europe .

Most of the countries of Europe use a single currency called the Euro. Germany is the most populous country in Europe,
Industrial revolution is said to have originated in Europe only & from here it spread to whole world.

Andes i,n South America, form the Second Highest Mountain System in the World next to the Himalayas(in Asia). They are Young Fold Mountains. Mt. Aconcagua is the Highest Peak (7,021 m) of The Andes. The Angel Falls of South America ,is the Highest Waterfall in the World. It also has the world’s largest river –Amazon (by volume of water).The name Amazon comes from Native American name for the river ‘Amazunu’ meaning ‘big wave’.In length ,it is the second longest river in the world (6440 km) South America is also the home of anaconda,one of the world’s largest snakes. 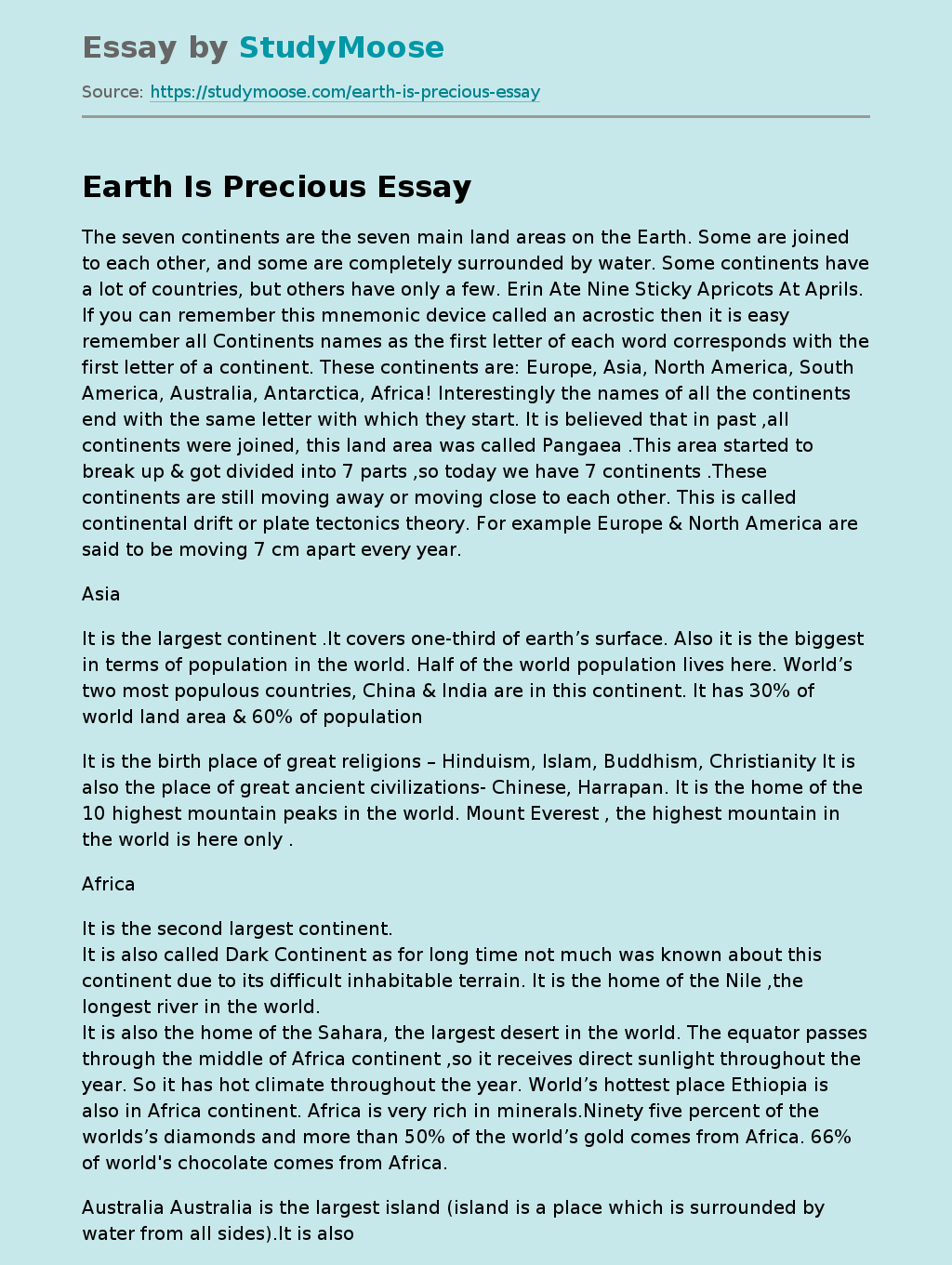