A Taste of Lebanon

Lebanon is one of the countries situated on the eastern part of the Mediterranean Sea in the Middle East. Its people considered the country as the place where the sun rises. The Lebanese people can be called Levantines since it was decided that the eastern part of the Sea will be called Levant. The country is 4,015 square miles, which is about three-fourths of the Connecticut state in the USA. In the east part of the Lebanon Mountains is the Bekaa Valley, a very fertile land.

At the eastern part of the valley is the Mount Hermon.

Lebanon experiences Mediterranean climate, with dry summers and cool and wet winters. Different changes of climate allow swimming and skiing. Its land area supports less than 30% of the crop production: 21% in agriculture and about 8% in forests. Its agriculture is abundant due to the water and productive soils and terraced slopes in the area. A variety of fruits and vegetables are planted in arable lands and this is where they get their own produce that they serve during meals.

Although Lebanon is a small country, it is considered a “green” country, because flowers, trees and small rivers thrive in this place. Countless streams that flowed during the winter rainy season, combined with runoff from melting snow, provide the water supply. Lebanon is also bordered by rocky mountains. It has lots of sunny beaches and snow-capped mountains, and the people of this country are known to be cultured and hospitable. Cuisine Lebanon’s cuisine is a fusion of European sophistication and exotic ingredients from Middle and Far East.

Sometimes other people thought that it was taken directly from the Middle East because of the similarity. However, the combination that makes Lebanese cuisine different makes it one of the most exciting culinary experiences that one should not miss. The Lebanese food became the most popular due to its cultural history. It is also considered to be the finest in the Middle East. The food they ate was influenced by the different foreign powers that ruled them in the past. These foreign powers have introduced different dishes that became staple to the Lebanese food.

These include olive oil, which is a part of every dish, fresh bread, baklava (a kind of dessert), laban (homemade yogurt), stuffed vegetables and nuts. Most of the exotic ingredients the Lebanese use were discovered by their early ancestors. Lebanon is also home to two main religions: Islam and Christianity. Although there were disagreements between them, each religion has its own festive celebrations. The Lebanese people prepare a variety of food when they celebrate. There are sweets and desserts, pastries, sugary delicacies and coffee (Amari 03).

Foods prepared depend on the kind of religious celebration (Ramadan, Christmas and Easter). But there are times when the Lebanese eat these foods on holidays, even if they have different religion. Because Lebanon is situated near the Mediterranean Sea, what the people eat is influenced by the seasons. The cuisine includes starches, fruits, vegetables and of course, seafood. Poultry meat is often used rather than red meat. When Lebanese eat red meat, it is usually lamb. Their dishes are grilled, baked or sauteed in olive oil.

Butter cream is only used when making desserts. In Lebanon, the cookery tradition is distinguished by the use of different choices of locally-produced, extremely fresh vegetables that can be served in many forms and shapes. The Lebanese cuisine is not much about sauces. It specializes in herbs, spices and the freshness of the ingredients. This results to a wide array of dishes and combinations. The Lebanese believes that variety is the spice of life. Bread is their staple food.

It is seasoned with thyme seasoning they call zahtar and olive oil for breakfast, and becomes a foodstuff in every meal and snack. Garlic and olive oil are also favorite ingredients to add and enhance the flavor of their cooking. These ingredients rarely miss any recipe. Kibbe is the Lebanese national dish. It is a pie which combines minced lamb and burghul wheat. Traditionally, food is served with the national drink, arak, a strong flavored liquor from fermented grape juice. It is mixed with water and ice.

The main meal during lunch consists of stew and rice dishes, including Spinach and Rice or Laban Immo. Moreover, food in Lebanon is served as mezza. Mezza is considered as a healthy and entertaining aspect of how Lebanese food is served. It is an assortment of delicious small dishes which provides an array of colors, flavors, textures and aromas. It may consist of flavored pickled vegetables, hommus and bread (for a light dinner), or skewered meats, grilled marinated seafood, a selection of salads and desserts, such as Kunafah or Qatayef.

Dinner in Lebanon is served earlier. It usually starts with an appetizer, such as namprik phao (Red Curry Paste). It is followed by a selection of dishes consisting of fish, meat and chicken with rice and a light soup. Other than these foods, coffee is also an important part of the cuisine. It is served usually after every meal, whether at home or in restaurants. It can be partnered with a fresh fruit or a selection of sweets. The Lebanese coffee is strong, thick and with cardamom. The Lebanese cuisine is truly a ‘celebration of life.

’ It is fresh, flavorful, diverse and refreshing. Although the foods are prepared simply, it is a product of the land and sea.

A Taste of Lebanon. (2016, Aug 26). Retrieved from http://studymoose.com/a-taste-of-lebanon-essay 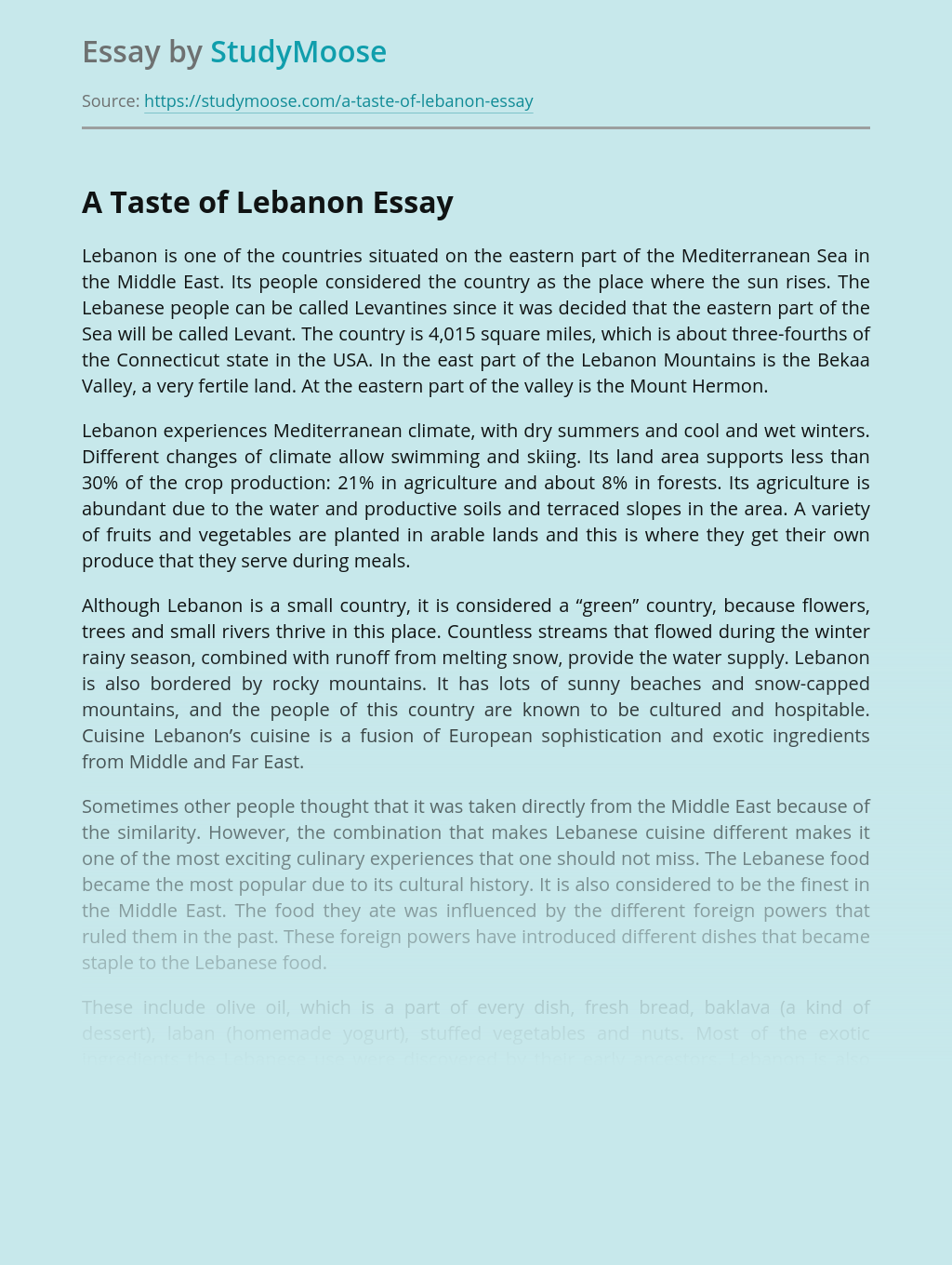