Has the Earth been static since the beginning of time? Well, Earth hasn’t been moving vigorously but it is changing at a steady rate. New geological features, rock formations, and locations of plates all rise and demolish some in a lifetime and others over a span of millions of years. Earth is dynamic; it constantly progresses and doesn’t rest. Through the churns and molds, the twists and turns, Earth is active because of plate tectonics and the rock cycle.

Turn in your highest-quality paper
Get a qualified writer to help you with
“ Dynamic Earth ”
Get high-quality paper
NEW! AI matching with writer

The ideas and theories that make up plate tectonics have shown Earth’s dynamism. The position of plates on global maps didn’t always look similar to the maps shown today. 250 million years ago, there existed a super continent, Pangea, which contained all land masses on Earth. Before plate tectonics, people thought the plates were always in the same position; no one could explain how such a large mass could move. It split up some 200 million years ago but scientists recently accepted this idea of moving plates; continental drift.

Even more recent was the idea of sea-floor spreading, the explanation for continental drift. These ideas merged to create what is now known as plate tectonics. In fact, it is more than likely that Earth will resemble Pangea in the future. The ideas that were brought up could easily have been within a person’s lifetime. Volcanoes and earthquakes are also common because of plate tectonics. There are about 500,000 earthquakes and hundreds of minor volcanic eruptions each year caused by the frequent interaction between plates.

Plate tectonics are a major piece of evidence for the changing planet.

The transformations that occur through the rock cycle have also shown Earth’s dynamism. The rock cycle describes the dynamic transitions that the three main types of rock undergo without any definitive order. A metamorphic rock will not always stay a metamorphic rock; it can turn into a sedimentary rock through weathering and erosion then compaction and cementation or an igneous rock through melting and cooling of magma. For example, the Andes Mountains were formed by the transformations of metamorphic and sedimentary rock. It began to take its present form about 80 to 100 million years ago.
Even though the process for change is prolonged, it takes place nonetheless. The rocks we see today may be different millions of years into the future. Basically, nothing is ever set in stone or rather, rock.

In conclusion, Earth’s dynamism is shown through plate tectonics and the rock cycle. It is constantly changing despite the slow rate. The features that are visible today won’t be there forever. Volcanoes that were once active will cease to erupt and continents that were once separated by water will be glued together. Beautiful rock formations will be torn down by the violent planet that is Earth. Due to the changing Earth, our understanding changes with it. Scientists constantly come up with new information to prove an idea or counter a theory. The winds of change are coming, can you feel it? 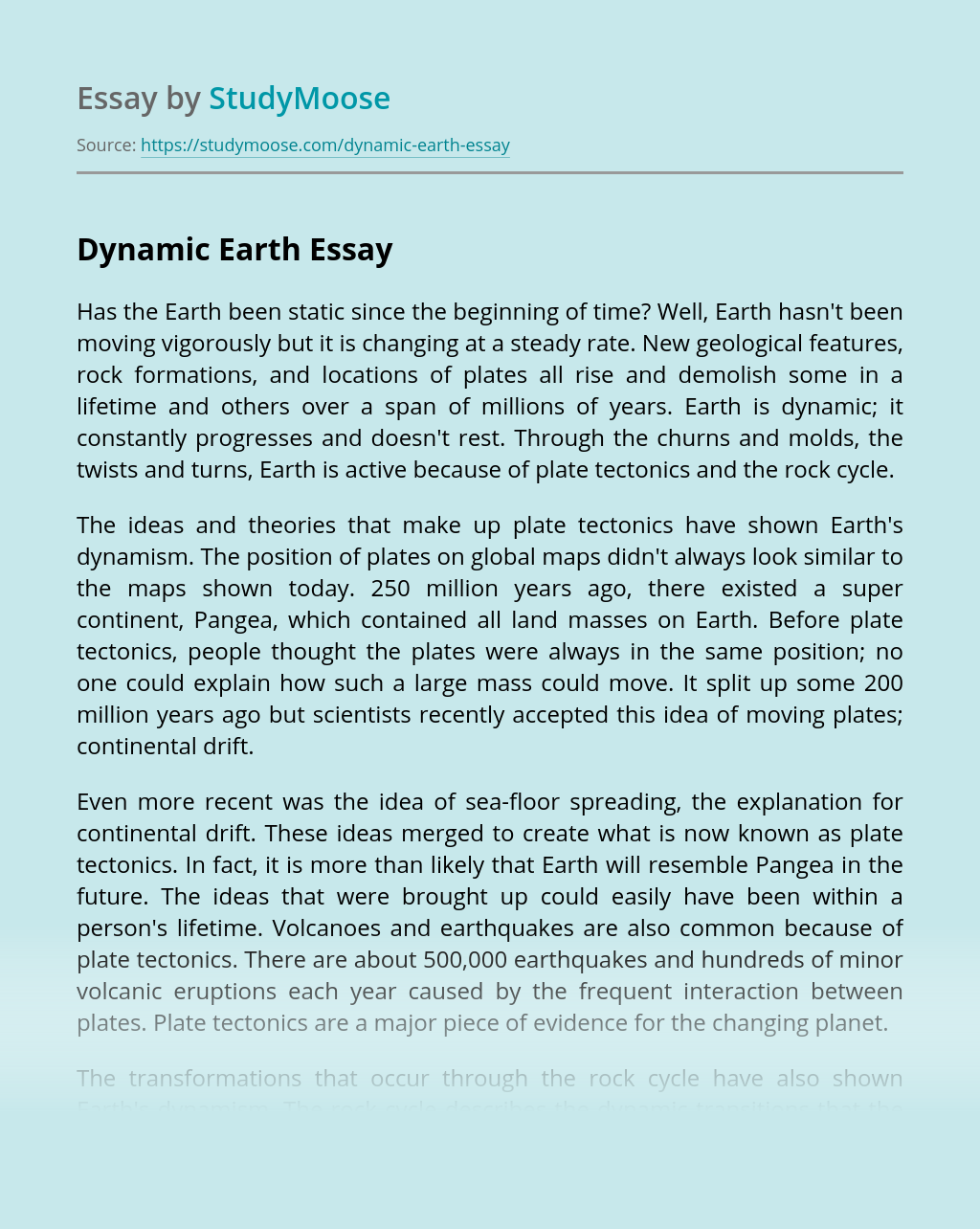 Turn in your highest-quality paper
Get a qualified writer to help you with
“ Dynamic Earth ”
Get high-quality paper
Helping students since 2015
Stay Safe, Stay Original