In the beginning, Montag is a very normal man relative to his society. He is a city fireman and burns books and houses without regret. Montag loves everything about his job; the power, the destruction of houses and books, and even the smell of the kerosene that he churns out daily.

Don't use plagiarized sources.
Get Your Custom Essay on Dynamic Character Just from $13,9/Page

He even feels pride and satisfaction in the jobs he carries out. His change, though, soon begins when he meets with a peculiar girl named Clarisse.

Clarisse makes Montag actually think, an uncommon thing in this peculiar society. Her pure innocence brings out a different side of him; one that doesn’t involve thoughtless burnings. He then, as a result of her insight, begins to question himself and even the society he lives in.

Another influence on Montag is the suicidal woman whose house he was about to burn. He ponders what in books can be important enough to die for. Her gruesome suicide pushes Montag over the edge and he forces himself to finally open a book.

Montag continues his metamorphosis from a heartless book burner to a philosophical learner. Guy continues gaining information and forming his opinion about his odd society. Montag soon realizes that there is no return from his change when he is forced to burn his own house and murder Beatty. In a way he is burning his own past and all that goes with it. His subsequent fleeing of the seen also symbolizes the final step in his change. It is Montag literally leaving his past of senselessness and destruction.

Guy Montag becomes a sensible, book loving educator. His metamorphosis is complete with memorizing books in a contribution to end the norm of his society. He makes a tremendous change both mentally and physically. Because of his change, though it caused him great hardships, Guy Montag is a dynamic character. 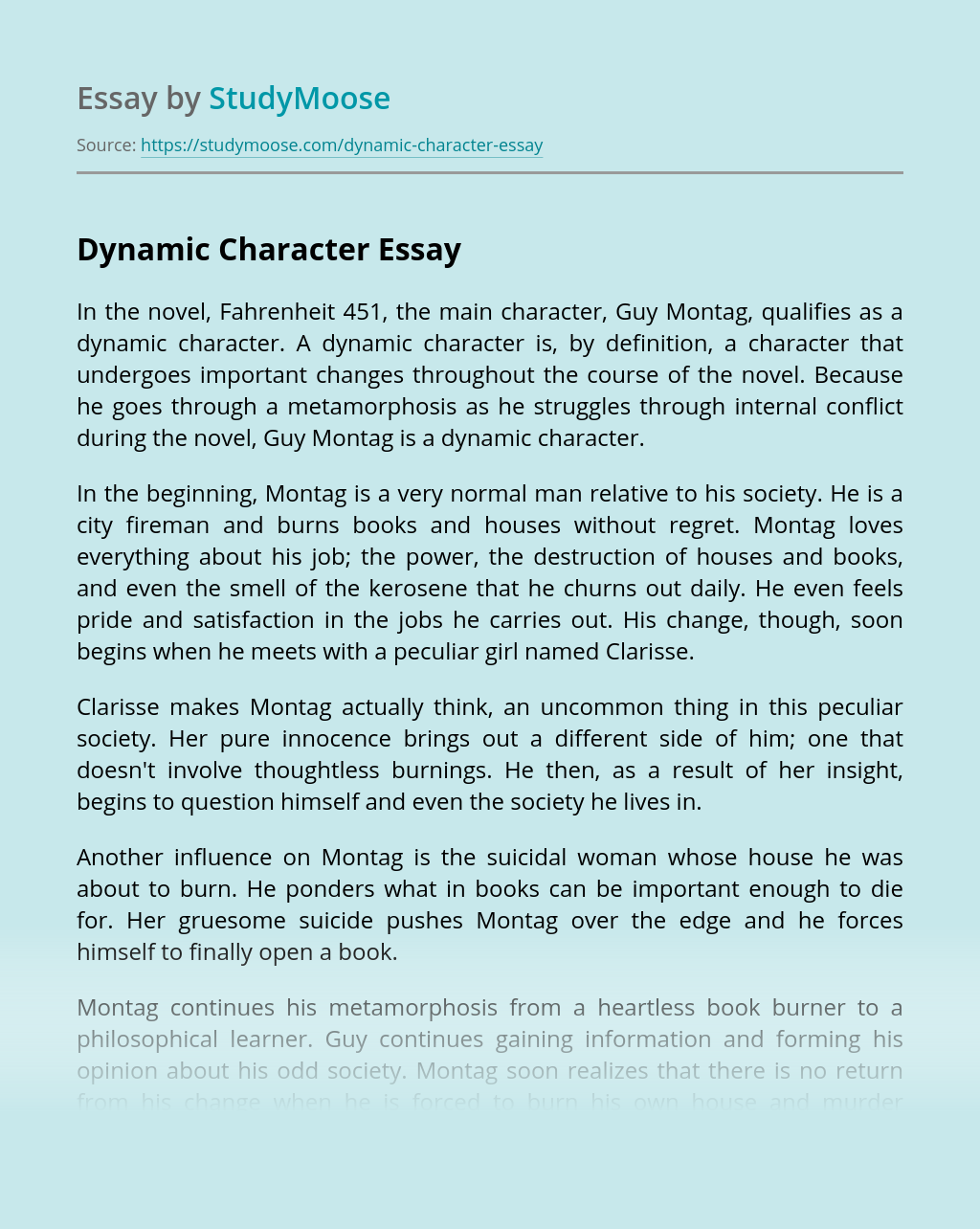 Utterson’s character is one of crucial importance in this novel. The story unfolds in the first chapter with the author giving us insight in to the role this lawyer will play. He is portrayed as being a stern and stoic man of honour and respect. The fact that he is the linking element between all...

Pride and Bias is among the most popular books written by Jane Austen which was very first published in 1813. It is more than a story of love which revolves around the lives of the Bennett family and the rich male visitors of Hertfordshire. The wide array of personalities in the story contributed to the...

The Colonel is a white man who fights the bigotry of the enemy, who have vowed to kill any officers who lead the troops and by his own commanding officers who have kept them out of the war to do their dirty work. Colonel Shaw starts the War eager and zealous for the fight, the...

Traits Through Its Characters It is known that a piece of writing can do more than tell a story, but can also portray indirect ideas to the reader. A narrative piece is able to show positive traits, presented through its characters. Literature can display a variety of positive attributes, through different characters, and situations. This...