How much food do consumers waste? Not much, a lot, you don’t know, or you don’t care? It doesn’t seem that many consumers do care. In the article, “On Dumpster Diving” (1993), Lars Eighner uses exposition, description, and narration to criticize consumer wastefulness.

Exposition is the literary device that Eighner uses the most throughout this article. Exposition is when the author conveys his story through explanation. Eighner explains certain things rather than telling a word for word story about his experiences.

Turn in your highest-quality paper
Get a qualified writer to help you with
“ Dumpster Diving Literary Analysis ”
Get high-quality paper
NEW! AI matching with writer

Eighner uses this device often in this article such as when he says, “I have heard people, evidentially meaning to be polite, use the word foraging, but I prefer to use that word for gathering nuts and berries and such, which I do also according to season and the opportunity”. Eighner does not simply say he disproves of using the word “foraging” in that way, he explains why he disproves of it. This is the manner in which a majority of the article is told in.

Description is another literary device used in this article. When an author writes descriptively they describe what they are discussing in great detail to help the reader better picture what they are saying. There is a bit of descriptive writing in Eighner’s article such as when he says, “Some students, and others, approach defrosting a freezer by chucking out the whole lot. The mass of frozen goods stays cold for a long time and items may be found still frozen or freshly thawed”.

Describing this process, Eighner tells us that consumers waste food because of ignorance. Not knowing a proper procedure or simply not preparing causes more avoidable wastefulness.

The third device Eighner uses in this article is narration. Narration is simply telling a story the way it happened. There is no stopping to explain or describe what you are discussing. Eighner practices this device when he says, “I began scavenging by pulling pizzas out of the dumpster behind a pizza delivery shop. While it lasted I had a steady supply of fresh, sometimes warm pizza”. Eighner tells us this to let us know that instead of donating the good pizza to the needy, the pizza shop just throws it in the trash.

Eighner’s tone in this article is formal. Eighner writes in a formal tone to let the consumers whom he is addressing know that just because he is homeless does not mean his opinion is unknowledgeable. If anything he should know more about the subject because he has seen it from both sides. Eighner uses a formal tone because the average consumer would think more highly of his opinion if it is written formally, as opposed to informally.

The article leaves me wondering whether or not consumers will see and understand what Eighner is trying to convey. Will people see how much food is being wasted? Are people going to start to stop and think about what they are throwing in the trash? Will the amount of wasted food decline, stay the same, or even increase? 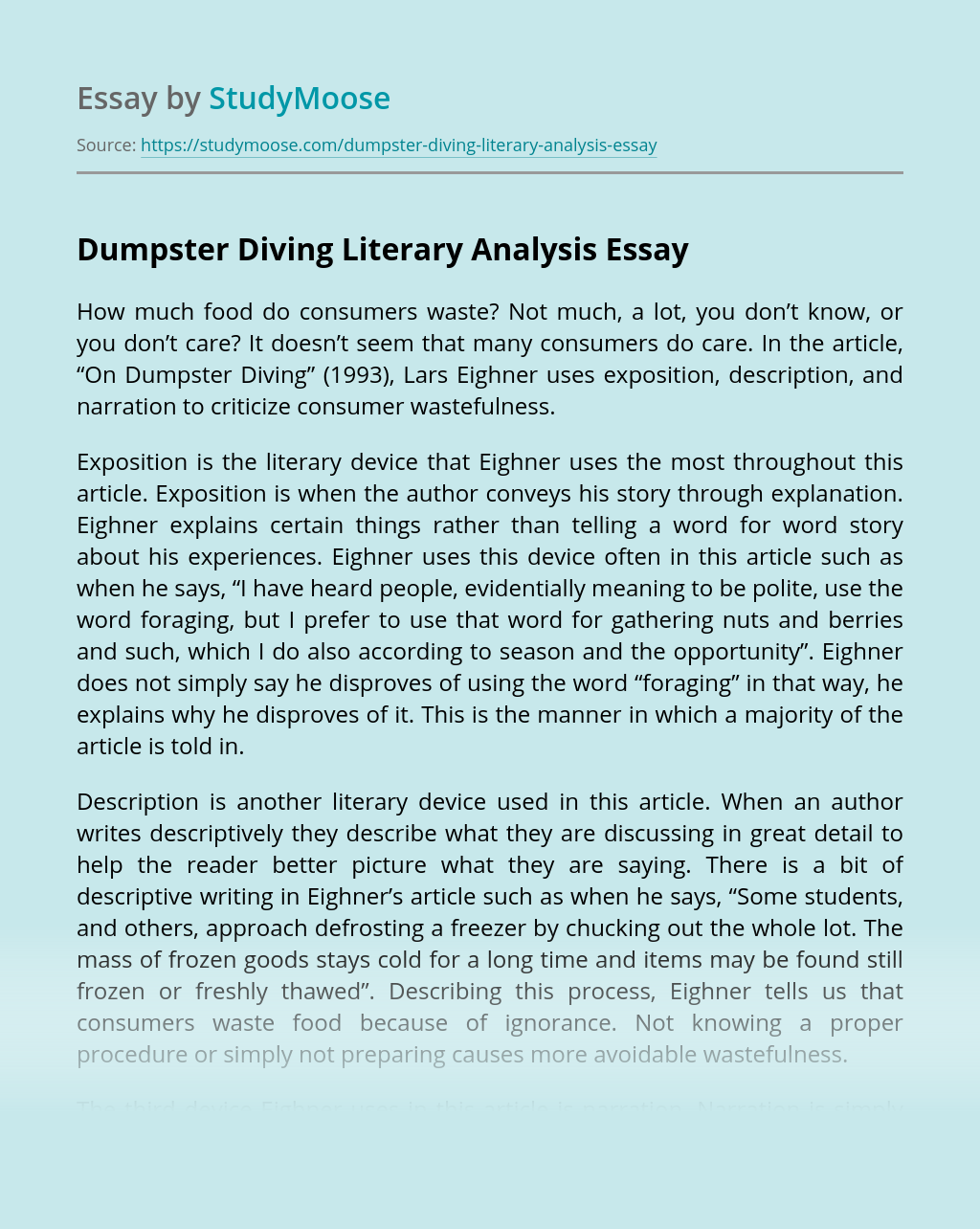 Turn in your highest-quality paper
Get a qualified writer to help you with
“ Dumpster Diving Literary Analysis ”
Get high-quality paper
Helping students since 2015
Stay Safe, Stay Original