In the luxury automobile market, there are many vehicles that boast high quality workmanship, luxurious appointments and powerful drivetrains. For this research paper, the midsize luxury sedan segment was chosen because most of the vehicles from the brands in this segment have similar features, power, and most importantly, price tags. The flagship models of the brands were not chosen since the features and amenities are very different from car to car to such a degree that it would be almost impossible to compare the models.

Don't use plagiarized sources. Get your custom essay on
“ Demand Elasticity of Luxury Automobiles ”
Get custom paper
NEW! smart matching with writer

The retail prices of the flagship vehicles also vary by a few thousand dollars, making a fair comparison between the models even more difficult. The midsize luxury sedan segment offers consumers a good mix of quality components and craftsmanship, luxurious amenities, and ample power for daily commuting. These vehicles are designed for consumers who want luxurious, high quality vehicles at a fair price. The vehicle chosen for this study is the all-new Lexus GS430 sedan.

The Lexus’ two closest competitors are the BMW 545i and the Cadillac STS V8.

The vehicles chosen are with all standard equipment but the navigation system option was added to each since the Lexus comes with it already loaded. The engine and transmission options were also chosen to equally match the vehicles in power and price. Since there is no central retail location where one can purchase any brand of vehicle they want, three dealerships were surveyed for price information for each brand of vehicle included in this study.

Surveying three dealerships for pricing for the same car allows us to not only see the price differences from one dealership to another but also allows us to compare the price of that vehicle with another from a totally different make.

See Appendix I for the results of the survey. The vehicles chosen in this study all boasted high quality craftsmanship coupled with fine materials. The materials used in the interior of the were applied tastefully, and generously.

The body panel fit and finish of all three vehicles was good, but the BMW had the tightest tolerances of the group. The paint finish however left much to be desired from all three models. There was a lot of orange peel in the finish of the paint. The interior design of the three models was tasteful, with the Cadillac being the most conservative and the BMW the most radically designed interior. The Cadillac had a good mix of both radical design and conservative styling.

The BMW had the iDrive system which has a short learning curve to it, but it is supposed to simplify how you use the systems in the car. There wasn’t enough time to learn how to fully utilize the features of the iDrive system, but, in my opinion, turning on the air conditioner shouldn’t require reading a manual or much less, attending a training session for how to use the device. The training session is provided by BMW to new owners of vehicles equipped with the system.

The iDrive system will have an effect on a consumer’s decision to purchase the vehicle since some consumers may find it cumbersome to use. Cadillac’s functions and controls were very simple and straight-forward. The navigation system and radio controls were touch screen and were displayed on a rather large monitor. The controls were easy to use and logically placed. The Lexus had a good mix of conservative and radical styling. The controls were laid out logically and the interior looked very clean.

The Lexus had a hideaway drawer that had a lot of controls and buttons in it that was easily tucked away out of view. All three models come standard with passenger and side air bags. They all come with a CD player and heated seats. A navigation system is available with each vehicle, but is standard on the GS430. To even out the playing field, the navigation option was added to the Cadillac and BMW. This change in options actually brought the prices of the vehicles very close together. The Lexus had the most front leg room; however the Cadillac had the most interior volume.

All three models have about the same power output with the BMW being the most powerful with a 325HP engine. The Cadillac was a close second with a 320HP engine and the GS430 came last with a 300HP engine. They all achieve approximately the same miles per gallon in the city, but highway mileage varies between the three models with the BMW being the most efficient out of the group. The BMW gets 18 miles to the gallon in the city and 26 on the highway, the Lexus 18/23, and the Cadillac 16/22 miles to the gallon, respectively.

The Lexus felt the most nimble because as was suspected, it had a lower curb weight than the other models. The transmissions on all models were super smooth and power delivery was consistent with throttle input. The Lexus had the smoothest ride out of all three, however it achieved this because of how disconnected it felt from the road. The lack of communication from the suspension to the driver in the Lexus leaves the driver uncertain of road conditions and forces the driver to rely on vehicle safety systems to keep the car stable. The BMW had a

sport suspension which made the ride a little rougher than the others, but was the most responsive to inputs from the driver and was the best at communicating road conditions to the driver, and because of this offered the most interactive driving experience. The suspension was tight and allowed the sedan to maneuver like a sports car. The Cadillac also had a smooth ride, but road feel was more prominent which made the ride feel a little less smooth than the Lexus. The Cadillac maneuvered well, but a stiffer suspension would make this vehicle a real performer.

In conclusion, the quality levels of all three vehicles were near the same level. The BMW had the tightest tolerances in fit and finish with the most responsive ride, though the iDrive system is sure to turn off some prospective buyers. The Lexus had a smooth ride with luxurious appointments throughout, whereas the Cadillac had a good mix of both performance and luxury. The Lexus and Cadillac also had a keyless entry and ignition system which allowed you to get into your car and turn it on without ever taking the key fob out of your pocket.

The consumers who purchase these vehicles are mid-upper class citizens. They are price-conscious and would like to get the best bang for their buck when purchasing a luxury car. The difference in the prices of alternate vehicles may be the deciding factor when purchasing a vehicle in this class. I would suggest a slight price decrease for the Lexus so it would be priced below the Cadillac, making it the best bang for the buck all the while providing the same comforts and amenities as the BMW and the Cadillac.

My estimation of the demand elasticity of luxury automobiles is that the demand is rather elastic. A slight change in price will cause a significant change in demand for that particular product. If the price of the Lexus, or for any model in this class for that matter, was to suddenly increase a few thousand dollars, that price increase would make consumers consider the Cadillac or BMW instead since they both have the same level of quality and features.

“Consumption of goods and services that are considered a luxury can be easily reduced if the price rises. Hence demand tends to be more elastic for fur coats, luxury cars, extensive vacations, etc. Goods considered a necessity are so important that buyers tend to respond little to a price change. They do respond however, although demand tends to be price inelastic for such goods” (Walbert). Lower priced practical vehicles can be considered necessities since a price increase will not cause consumers to not purchase these products. 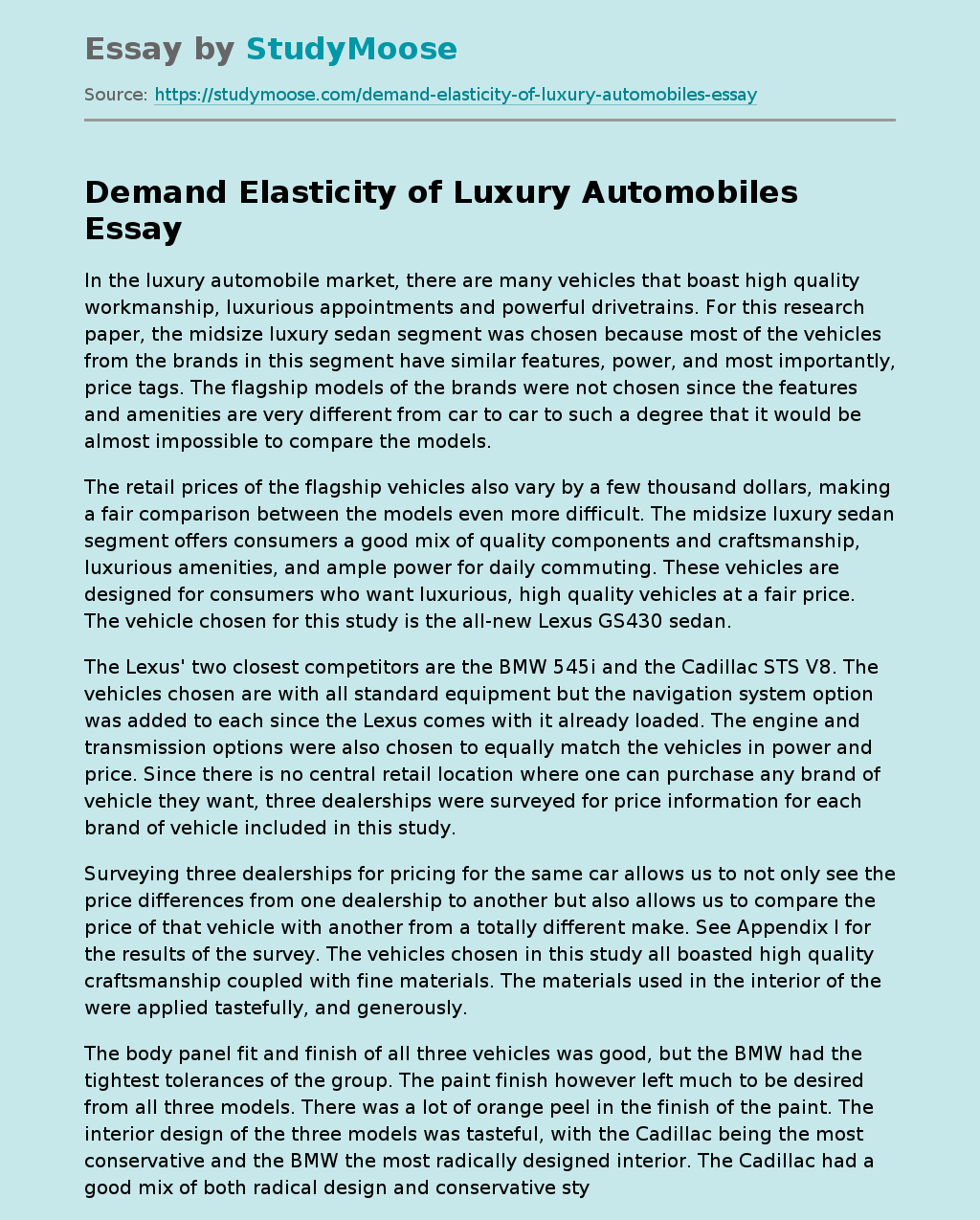