Drums, Girls and Dangerous Pie is about a US teenager aged 13 named Steven who wants to be a drummer for the All-Star Jazz Band. He has a four year old brother named Jeffery and they live with their parents. Steven has a crush on Renee Albert, the hottest girl in school and the story has a good mix of the troubles that a teenager faces and the tragedy that comes all of sudden into their lives. All that Steven cares about in his life is drumming and the wonderful girl on whom he has a deep crush.

Turn in your highest-quality paper
Get a qualified writer to help you with
“ Drums, Girls and Dangerous Pie ”
Get high-quality paper
NEW! AI matching with writer

One day, Jeffery comes home with a minor nosebleed but it turns out that he actually has cancer.

The book reveals the deep distress that Steven has when he finds that his brother has cancer but he is not ready to acknowledge that the brother may die from the disease. Jeffrey was a boisterous kid with his own brand of humour and his idea of a Dangerous Pie was a mixing of coffee grounds, raw eggs and their smashed shells, Coke, uncooked bacon, and three Matchbox racing cars.

Jeffrey is kid and does not know what cancer is and his first question that he asks his mother after they return from the Philadelphia hospital “So Mom, everything’s OK right?

This whole cancer mistake is sorted out? ” Steven is older than his brother and he describes his mother as being weepy and his father as acting like a zombie. It takes sometime for Steven to come realize the deadly effect of Jeffrey’s illness and he becomes grown up, taking more responsibilities and caring for others.

There are also introspections when he speaks to himself “Once I was forced to believe that Jeffrey really had cancer my mind played another big trick on me. I started to think that if I just made the right promises to God.

He would magically make Jeffrey better again”. Steven is crazy about drumming and is planning to enter a high school contest for drummers and is trying very hard to win the competition. His teacher calls him a ‘trooper’ to make him drum better. But the illness of his brother has a deep effect on his life and he starts helping his parents with the treatment, taking his brother to the hospital and so on. All these days, he considered his brother as a pest but now that his brother has been afflicted with cancer, he realises that he cares for him.

His friends in school, who used to fight with him have now turned sympathetic and they offer their support and help. Steven resents this pity and feels that he can take things on his own and does not need their pity. He puts his own plans on the backseat in an effort to help his brother. Things take a new turn when during one of his visits to the hospital, he meets a girl who herself is suffering from cancer. She teaches him the meaning of friendship and what it means to care for others and to love them. Unfortunately the girl dies of the disease before she can be cured and this has a deep effect on Steven.

Jeffery is cured of the disease and returns home but Steven has had a very sobering effect from the battle with the disease and the friendship of the girl in the hospital. He realises that he is a much better person and is able to give love to others in many more ways and knows that being selfish and caring for ones own wants is not good. The novel is a must read not only for teens but also for adults and parents and kids who have behavioural problems ore are aggressive and selfish. The book has a wry sense of humour and the author uses Italics while narrating dialogues and this brings an urgency and attention to the narration.

There are no dull moments in the book and it is very honest and truthful. Everyone can take a moral with them and that is to care for others in their times of need and not to be selfish and self centred. The book also shows the peculiar urgencies and trials that teens face in their lives and how they should best get out of these petty things. The book also shows the deep bonds of loves that runs in a family and how a tragedy can bind a family together. REFERENCES Sonnenblick Jordan (2004), Drums, Girls and Dangerous Pie, US, Scholastic Press, ISBN 0439755190 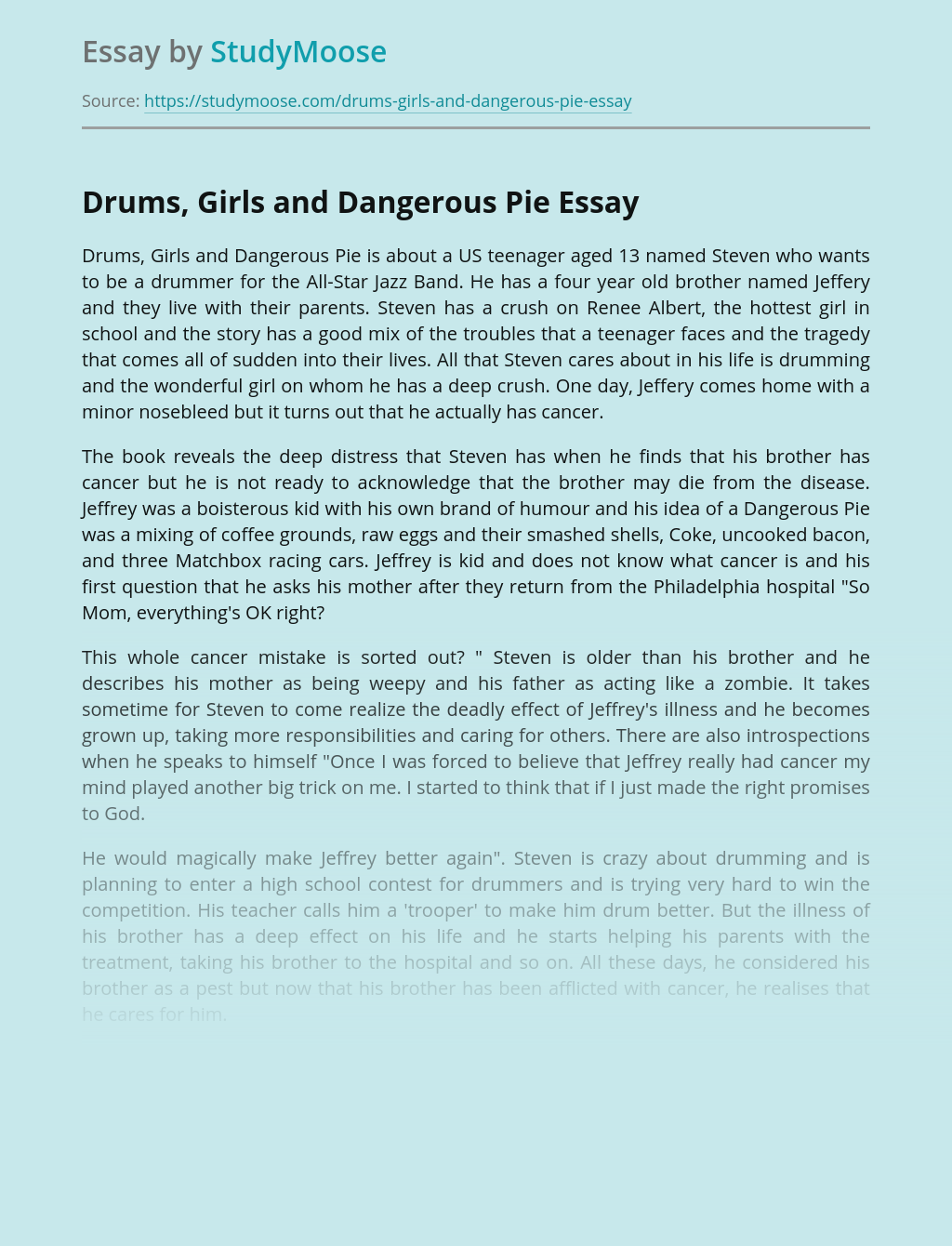 Turn in your highest-quality paper
Get a qualified writer to help you with
“ Drums, Girls and Dangerous Pie ”
Get high-quality paper
Helping students since 2015
Stay Safe, Stay Original