Mark Rydell’s “On Golden Pond” is a drama that emphasizes the stages people of various ages endures. Utilizing Erik Erikson’s Psychosocial Stages as learned in Dr. Malone’s class, each of the main characters can be placed within a stage and their age-related crises analyzed. As this film is a drama, it was relatable to the audience, prompting personal reactions as well as implementing life examples of some of the theories studied in Malone’s class. Perhaps the most significant character, Norman Thayer is a force to be reckoned with.

Don't use plagiarized sources. Get your custom essay on
“ Drama Film On Golden Pond ”
Get custom paper
NEW! smart matching with writer

A grumpy old miser, Norman may appear at times to not fully be capable of taking care of himself; however, he is still very sharp.

Norman demonstrates Erikson’s last stage, termed Late Adulthood, which features the issue of integrity versus despair. A person in late adulthood is much more concerned with his long-term future, death, than someone in a younger life stage. Early in the film Ethel remarks that death is all Norman thinks about, to which Norman responds, death is the most fascinating thing he has to think about.

Norman often appears mad at everyone around him, but this anger is really directed at himself. For example, in the fire scene, Norman yells at Billy but really Norman is mad at himself. Ethel points out to Billy that Norman yells to “remind himself he still can”. Norman feels powerless as his aged body betrays him. Although Norman was smart alek and grumpy throughout the movie, he was much more pleasant after bonding with Billy.

Billy was a much needed remedy to Norman’s despair. Being around such a carefree yet, tenacious adolescent had a very positive influence on Norman. Instead of sitting around thinking about the inconveniences of being older, Norman is sharing hobbies and various things with Billy. This sharing completes the generativity versus stagnation crisis. Norman is giving back by connecting with Billy; therefore, Norman feels accomplished. Norman realizes there are still things he can do before he dies. The turning point in Norman’s crisis is when he and Billy release Walter the fish, explaining they figured “if he has lived this long, he deserves to keep living”. This comment says a lot about how Norman is coping with getting older. Norman reminds me of several people combined, but there is someone in particular that Norman reminds me of. His grumpiness and smart remarks remind me of my own maternal grandfather. My grandfather actually just reached late adulthood so I guess there is still a chance that he could face an issue of despair. He has not had to deal with the issue of despair I believe because he still works. He owns a dairy and he still runs it. My grandfather like Norman wants to keep working, and unlike Norman he still has the chance to.

My grandfather is fourteen years younger than Norman and I believe that their physical differences are because of this. It will be interesting to see how capable my grandfather is at eighty years old. Norman also reminds me of my paternal grandmother because she like Norman can be pessimistic about the future. I realize now after this class that she is not trying to be negative. Rather, she is just trying to be realistic and remind herself and us that we should value this time we still have together. Lately she has been babysitting my younger cousins more often and this has had a very positive effect. No one likes to sit around and feel as if they do not have a purpose so tasks and hobbies appear to be important in late adulthood. Watching Norman suffer was also hard to bear because he reminds me of my grandfather and others. In high school, I worked as a waitress in a café and several of my customer were people in late adulthood and these are the people Norman also reminds me of. As beautiful as life is, it can be hard to watch someone get older. When our bodies do not work the way they used to, people feel betrayed. I grew very close to some of my customers and when one of them was sent to a retirement home so he could be cared for it was very sad.

However, now thinking about this was the best decision to make. Ethel Thayer also is in Erikson’s psychosocial stage Late Adulthood, dealing with the crisis of integrity versus despair. Unlike Norman, Ethel is very satisfied with her life and what the audience sees is a woman of integrity. For sometime I thought Ethel might still be in the stage of middle adulthood, but instead I think she is just a very well-adjusted older woman. Ethel likes nothing more to be outside collecting strawberries or watching the loons. Ethel makes strong attempts to ensure her loved ones are satisfied with their own lives. She has a hard time understanding why Norman and Chelsea cannot be as satisfied and reprimands both of them. In a dramatic confrontation, Ethel points out to Chelsea that regretting childhood events “doesn’t have to ruin your life”. Although she may not be as grumpy as her husband, Ethel worries about death jut as he does. Following Norman’s heat attack, both Norman and Ethel realize they have precious time left together. Ethel reminds me very much so of my maternal grandmother.

Even Ethel and Norman’s relationship resembles my maternal grandparents’. After watching this movie, I feel that I appreciate my grandmother more, and I hope to make more time to visit with her. Similar to Ethel wanting to visit with Chelsea and Billy, my grandmother would love to see me more. Sometimes my grandmother tries to give me advice that I do not want. Now I realize I should at least give her the courtesy of listening because who knows, one day I might find her advice relevant. Billy demonstrates the stage of adolescence. He faces a crisis of identity versus confusion. As Billy nears adulthood, he is finding himself; being a child of divorce, he could possibly have a harder time doing so. In this stage, Billy is discovering his values and his place in society. Having strong role models like the Thayers can only have a positive influence. In the film Billy wants to learn from Ethel and Norman, but he also wants his independence. Billy expresses his independence when he takes the boat for a joy ride. Norman trusting Billy to navigate Purgatory Cove gives Billy the confidence boost that a person in the identity versus confusion crisis needs.

Billy also seems to have issues with feeling wanted. When he realizes that his father is taken off to Europe, Billy feels abandoned and assumes the Thayers do not want to have him around. It surprises him to realize that they do want him around. This is another boost for his confidence. Billy reminds me of my younger brother who recently turned sixteen. My brother tries very hard to act like the men in my family, which consists of: my father, my uncles and my maternal grandfather. All of the men in my family are hard workers and self-reliant. As my brother finds his own identity I feel confident I will like who he becomes because he has such great role models. Chelsea, like many of the characters in the film is not satisfied with her life. Age wise, she is in the Mid Adulthood stage, but she is still dealing with the crises of adolescence. In a confession to Ethel, Chelsea says that being at Golden Pond is like being a teenager all over again.

Since Chelsea did not have a good relationship with her father Norman, she has a hard time knowing who she wanted to be. Chelsea resolves this by marrying Bill who is not confused about his identity and also by talking to Norman. Chelsea reminds me a lot of myself. When I’m away at college, I’m very sure of myself, but when I visit back home at times I have a difficult time getting along with my father. I often want to change my father and his actions. My grandmother who reminds me of Ethel tells me that part of growing up is realizing who people are and loving them anyways. This realization helps, but my and my father’s relationship is still a work in progress. Despite being filmed in 1981, watching “On Golden Pond” was an enjoyable experience.

I loved Norman’s humor and the relationships reminded me of those in my own personal life. Each of the characters reminded me of at least one person significant in my life. The movie highlighted the fact that these theories covered in Malone’s class are indeed very much realistic. Also the film made these theories relatable, producing a greater understanding. The movie opened my eyes and helped me understand those people who I hold close. It also made me realize that I need to work on my relationship with my parents. Using this new-found understanding, I can work on how I interact with people therefore, strengthening my relationships. 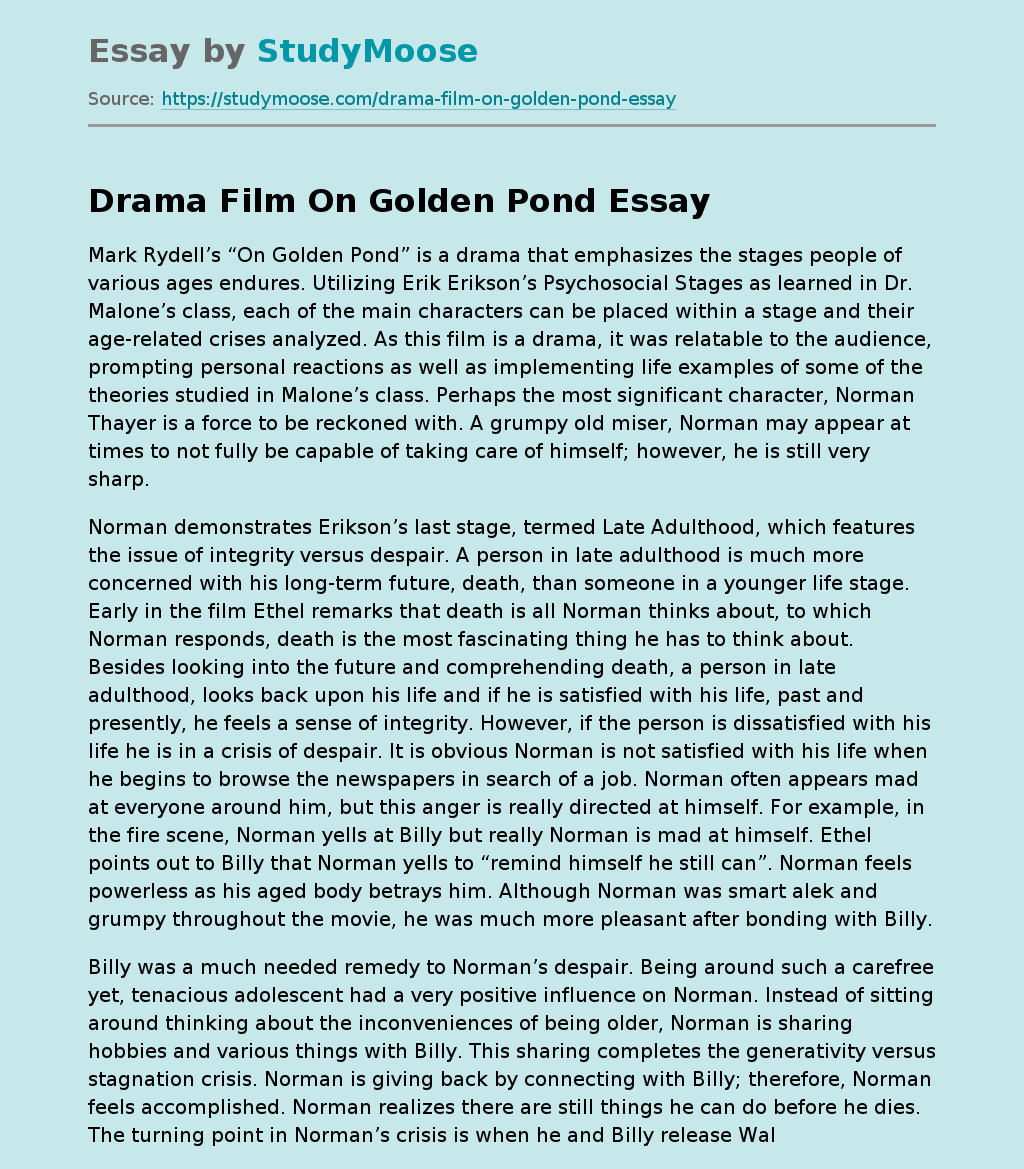