Playing games is a natural part of growing. It’s one way that kids learn to socialize, compete, to fulfil their craving ego, to entertain, to have fun and sometimes to escape from depression. Computer and online games, in most instances, are no more dangerous than other games, which kids play outdoors. But sometimes, computer and online games with the touch of modern technology, it become more than just play. They become an addiction. And when they become an addiction, it will be hard for the parents and to them to end what has been started.

Don't use plagiarized sources.
Get Your Custom Essay on DOTA Addiction Just from $13,9/Page

Computer games are slowly arousing and it is one of the things that bring the negative effect. Many people are playing and having so much fun with this that can be a form of entertainment.

One of those addicting games is Defense of the Ancients (commonly known as DOTA) is a real-time online or LAN strategy computer game composing of two to ten or twelve players where you can choose from over ninety unique characters you can play on.

It requires focus, strategy, quick hands and quick thinking when you are in difficult situations. The objective of the scenario is to destroy the opponent’s “Ancient”. The two ancient teams are heavily guarded structures at opposing corners of the map.

The game is very popular in the world; in the Philippines and Thailand. It is also one of the most well-known computer games being played in Sweden and other Northern European countries. By these reasons, the popularity of this game has increase over time not only with these countries being mentioned but it has been getting more popular all over the world.

As DOTA arises, many issues also arise. It may be about on relationships, peers, foes, and most especially, education. Many critics worldwide are arguing about the real effects of playing DOTA considering that many people especially teenagers are getting addicted on this computer game. They said, this is a mind numbing entertainment for everyone and produces a socially isolated people and promotes violent behaviours. Some of these criticisms may or may not be true. In the Philippines, DOTA is being played not only by teenager but also by the kids that made this as a big concern for parents.

At their young age they are more prone on getting addicted on playing this game and might get out of focus to their studies and would lost their interests in playing physical and traditional games like “tumbang preso”, “luksang baka”, “patintero”, and many more. There are many students and even some young professionals that are addicted to DOTA. When time spent on the computer, playing DOTA games it reaches a point that it harms a child’s or adult’s family and social relationships. Neither can disrupt school nor work life.

Chapter II : Background of the Problem

This action research is intended to prevent the addiction of the minors in playing computer games specifically DOTA. We have included negative and positive effects of the game, its advantage and disadvantages and some professional advices. Online games like DOTA can be a good social platform of the minors if it was directed in a good way. The positive effects of playing DOTA are for the youth to communicate teenagers who initially don’t know each other can easily be friends, they will also learn to strategize and boost their reflexes for DOTA is for smart ones.

The American Psychiatric Association (APA) adds Internet Gaming Addiction as one of the potential disorders that needs to be treated. And they are hoping for more clinical research to formally include it on the list. Should it be considered as such? Here are some arguments and counter-arguments regarding gaming addiction.

DOTA Addiction. (2016, May 09). Retrieved from https://studymoose.com/dota-addiction-essay 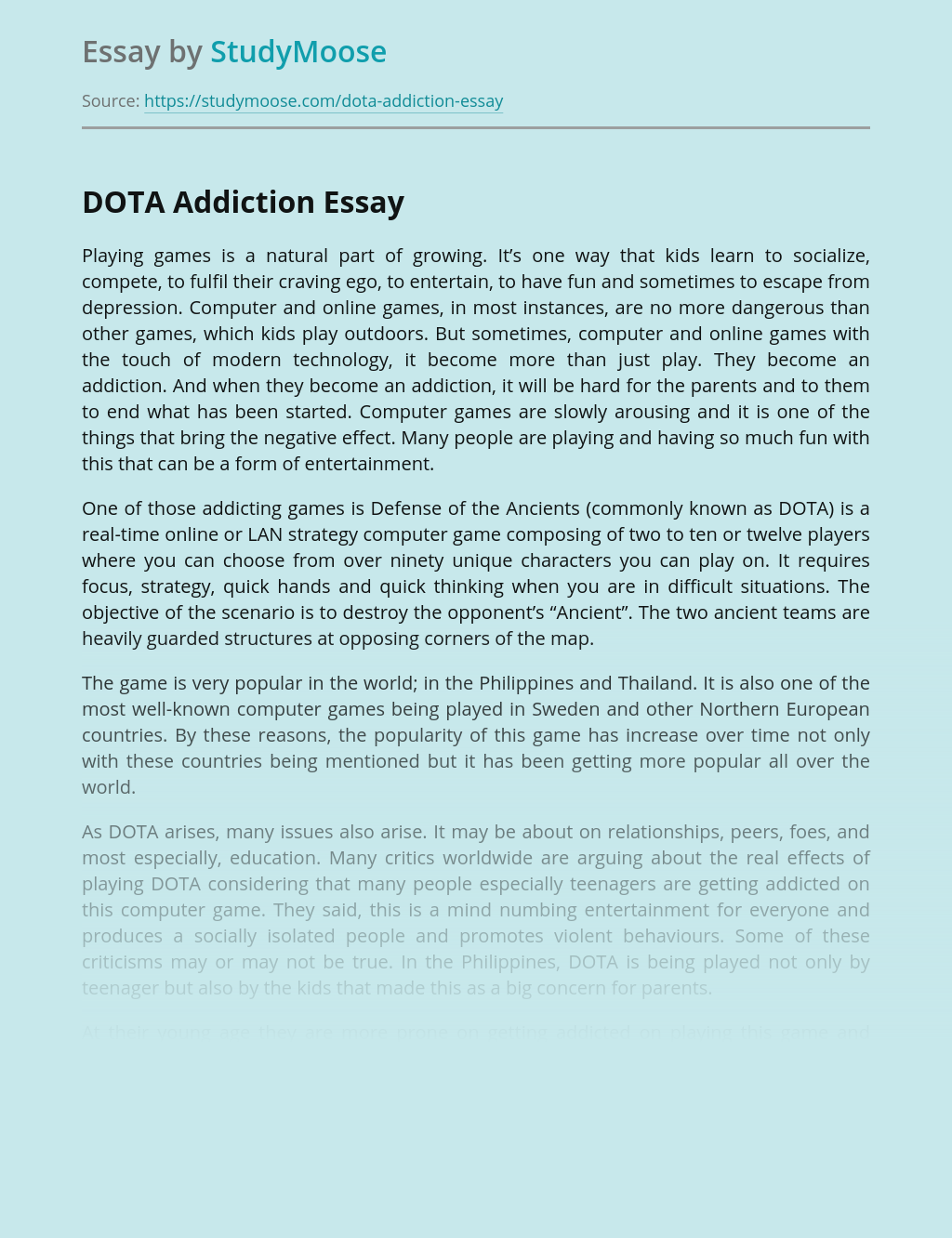 How to prevent Internet Addiction

Internet Addiction is one of the most serious problems for all the teenagers; it will seriously affect your mental and physiological health. Have you ever been a person who has been addicted to the Internet social world? According to a research of US National Library Of Medicine National Institutes of States, 70% of teenagers in...

﻿Alcohol advertisements should be banned

Alcohol is the ingredient found in beer, wine and spirits which causes drunkenness. Abuse of alcohol, or consumption of more alcohol than the body can handle, can lead to liver damage and other debilitating conditions. Alcohol abuse can also lead to alcoholism, or alcohol addiction, in which a person becomes physically and psychologically dependent on...

It is becoming increasingly difficult to ignore the problem of addiction, which affects many individuals, families and communities everyday. This essay is going to look at the prevalence of addiction in Scotland and what the Scottish Government are proposing to do to reduce the damage caused by addiction. There are many other stakeholders in the...

In the essay “The Plug-In Drug: Television, Computers, and Family Life” writer and media critic Marie Winn implies that “television addiction” can be a serious addiction and just as destructive and addicting as drugs and alcohol. The author explains how the word “addiction” is sometimes used in too often to or in a joking manner...

Do you have some free time? Do you always watch television? Do you watch too much television? If so, then you have problem with television addiction. According to the Oxford dictionary “an addiction” is designed habit or a person physically dependent on something like drugs etc. Television is the wonderful invention and it is also...