Apocalypse Now by Francis Coppola is a loose adaptation of the novel Heart of Darkness by Joseph Conrad. Colonel Kurtz, played by Marlon Brando, is a rogue soldier that has soon defected from the American army, after he murders two soldiers that he terms as double agents. Captain Willard (Martin Sheen) is therefore sent to assassinate him. Together with other officers, they encounter obstacles that shake the roots of their existence.

While many may take Apocalypse Now as any other action flick from Hollywood, the movie actually is a true manifestation of what happened in Vietnam.

Don't use plagiarized sources. Get your custom essay on
“ Dominant Themes in Apocalypse Now by Francis Ford Coppola ”
Get custom paper
NEW! smart matching with writer

As Coppola once described it, “My film is not about Vietnam, it is Vietnam”, his sentiments could not be further from the truth. Many movies have been made about American war in Vietnam, but none of them comes close to describing what happened in the Asian nation as Apocalypse Now. To celebrate this human defining moment in film history, here are the dominant themes in Coppola’s movie.

One of the major themes in this movie is internal conflict that soldiers undergo as a result of going to war. The protagonist, Willard and the antagonist, Colonel Kurtz have been rendered insane. They don’t see themselves going back to civilized life. As the movie commences, we can see Willard is unstable emotionally. He is so used to war that he yearns for it. When he is given the opportunity to hunt Kurtz, he is easily takes up the mission and abandons any prospects of becoming an American citizen again.

Colonel Kurtz is also facing the same challenges. He has lost his mind and defected from the American army. He runs his own army of defectors and continues to wreak havoc in the Vietnamese forest. It is evident in his dialogues, especially in the end that he is fighting psychological demons. Death seems the only solution to his traumatized life.

Kilgore, another war hero finds fun in killing people. He destroys a whole village to make way for the PBR at the mouth of the Nung River. He even has Ride of the Valkyries, as the soundtrack to his raids. Other soldiers in the PBR are also mentally unstable. They commit a series of murders on innocent civilians without any form of remorse in them. Most of the soldiers who accompany Willard on his mission lack his animosity- in fact, he compares them to hippies. They however changes as soon as they are confronted by danger.

“Every man has got a breaking point. You and I have. Walter Kurtz has reached his and very obviously, he has gone insane.”

These sentiments by Corman reflect the realities of engaging in war for long. You eventually lose all aspects of humanity and become a glorified animal.

The Shallow Nature of American Values

The irony of the whole Vietnam war, as captured by this movie is that, while the American public is made to believe that it is about freedom and democracy, American soldiers do not see it this way. They are only obeying orders. They just want to finish the war and go back home to psychedelic rock, surfing and Playboy Playmates. These shallow values are echoed by Willard, who is disturbed by his soldiers’ lack of meaningful insight as to why they are fighting.

He describes his team as “rock and rollers with one foot in their graves.” To American soldiers the war is a big joke to them. They have even converted the whole affair into a form of entertainment with American journalists filming them and requesting them not to look at the cameras. On the flipside, the Vietnamese army is fighting for their land, for their freedom, for their identity. They know the repercussions of losing this war and will do whatever it is within their power to win it. Their sense of patriotism captures the imagination of Kurtz, who claims:

“Then I realized they were stronger than we. They have the strength, the strength to do that. If I had ten divisions of those men, then our troubles here would be over very quickly. You have to have men, who are moral and at the same time who are able to utilize their primordial instincts to kill without feeling, without passion, without judgment.”

Kurtz can be looked at metaphorically as the apex of what goes wrong when you go to war. Although Willard is far from okay, he still has hope of redemption. Kurtz is beyond repair and it is evident that Willard is headed the same way at the beginning of the movie. His obsession with killing Kurtz can be looked as a way of redeeming himself. The mission, which seems like a journey to hell represent the painful depths he has to go to gain his humanity back.

It is within these depths that he lost his essence of living. It would therefore make sense for him to go back to these depths again to reclaim his life back. When he kills Kurtz, he has the opportunity to take up his position, but he declines it. He comes out of the ordeal a changed man. What we originally assumed to be a stupid mission turns out to be his redemption. Another case of hope is when Colonel Kurtz sends a note to his family. He explains to them how he has been vilified for acting on the interests of the American people. Despite being insane, he still thinks about his family and writes to them occasionally.

Dominant Themes in Apocalypse Now by Francis Ford Coppola. (2018, May 07). Retrieved from https://studymoose.com/dominant-themes-in-apocalypse-now-by-francis-ford-coppola-essay 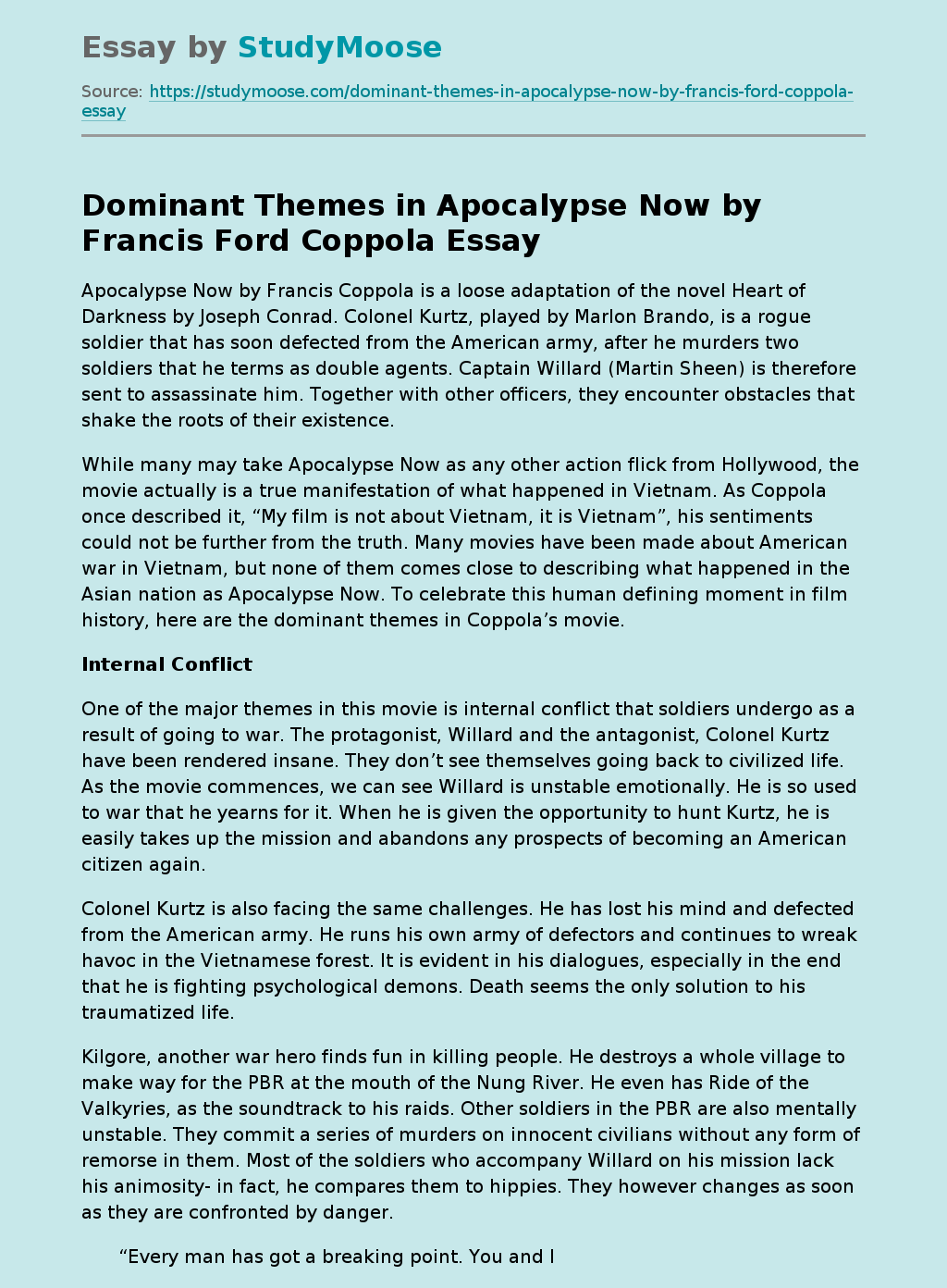