The distance travelled by the margarine tub

These averages will be used to plot a line on a graph. I am predicting that my line on the graph should look something like this:

Don't use plagiarized sources. Get your custom essay on
“ The distance travelled by the margarine tub ”
Get custom paper
NEW! smart matching with writer

If I suddenly used carpet, then the rougher surface will increase the amount of friction and more friction will result in the margarine tub decelerating faster so the distance will also decrease.

This will effect my results as I would be getting anomalous results as the distance would be decreasing. Similarly, if I changed my floor surface to a polished wood, then the friction will decrease between the tub and the floor and the margarine tub will travel further due to there being less friction affecting the distance travelled.

The mass of the tub must always be kept the same because the acceleration rate will change. For example, if the margarine tub was weighed down more and therefore the distance travelled will decrease. By contrast, is we made the tub lighter, it will travel further and we would expect the distance to greatly increase. The tub that I use must be the same tub that I use for all my experiments because a change in the shape of the tub would mean that it would produce a different air resistance quantity.

The only variable that we will continually change in this experiment is the force applied by the hand on the elastic band in Newtons. This variable is the only one changing so that we can use the results to plot a graph and show us the general trend.

Anomalous results are likely to occur often during the experiments due to errors. These errors can mean that you will not necessarily obtain the exact result each time for each force, and I have had to repeat the experiment for a certain force several times before it fitted in with the 5cm distance tolerance.

For example, I had to carry out the experiment roughly 5-7 times for each force. This could have been the result of not fully controlling all the variables that were meant to be kept the same. When I obtained my final result I had to generate an average for each force and plot a line graph connecting as many points as possible with the force applied in Newtons along the x-axis and the distance travelled in cm along the y-axis. I plotted the averages and drew the line along the points.

The distance travelled by the margarine tub. (2020, Jun 02). Retrieved from https://studymoose.com/distance-travelled-margarine-tub-10171-new-essay 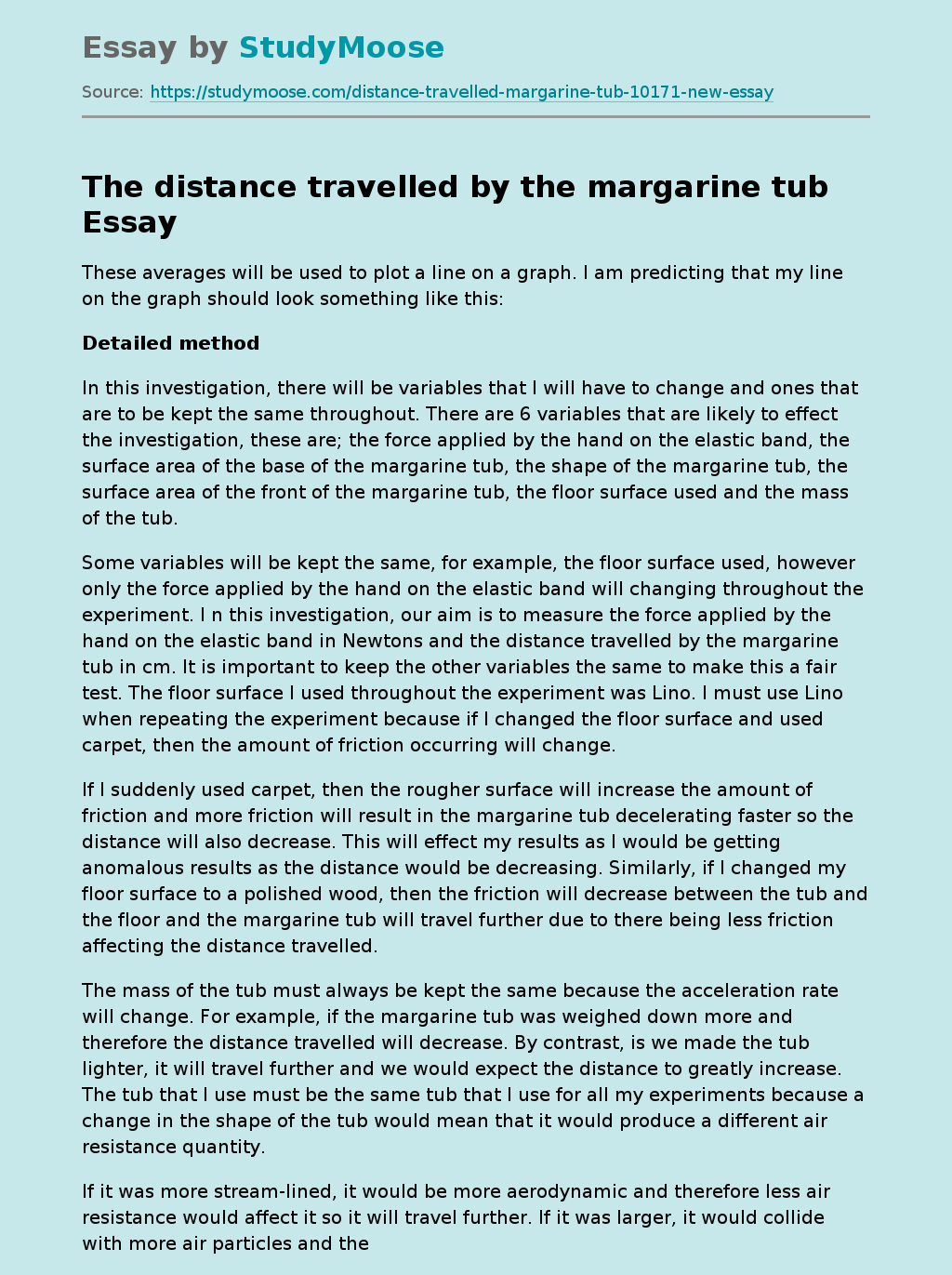