Discrimination with "A House on Mango Street"

In the society of today, discrimination and other similar ideas are not suppressed so that they are free to roam our cities, states, countries, and finally the whole world. Still, different sides of the world have different types of discriminations. There are some about animals, race, etc. But the worst possible is discrimination against the opposite sex; cause then those people would be against about 50 percent of the world’s population of humans. So, those who oppose this would try to show the world that the idea of sexism is wrong, and Sandra Cisneros is one of then.

Don't use plagiarized sources. Get your custom essay on
“ Discrimination with “A House on Mango Street” ”
Get custom paper
NEW! smart matching with writer

She indirectly discusses it in a book, “House on Mango Street.”

This book, “The House on Mango Street” by Sandra Cisneros, showed feminism and machismo in the Latino culture. For example, I quote, “I thought I would because he was so old and just as I was about to put my lips on his cheek, he grabs my face with both hands and kisses me hard on the mouth and doesn’t let go.

”(p.55) In this quote, the man, who represents the machismo side, tries to take control of Esperanza, which is in the feminism side. This shows an example for power between each other and the thought that the sexes are unequal, unbalanced, and that the male side has more power.

For, is the man in the story didn’t think that he could kiss Esperanza and get away with it because he has the right to do so, then he wouldn’t have done so.

Just because the society that Esperanza lives in believe that women have no right in the governments or any other part of the society than to care for the family that she lives in and nothing else. So, taking the machismo’s side, first of all I think that it is wrong and that all people are on the same level of equality, its just that some prove themselves more valuable to others so that they have more power in the real world but no person has power over another person.

Women’s rights is another important idea of discriminations. An example from this book would be, “Then Rafaela, who is still young but getting old from leaning out the window so much, gets locked indoor because her husband is afraid Rafaela will run away since she is too beautiful to look at.”(p.79) In this part of the story, the one on the feminism side is being locked up and prevented from doing what she wants to do. In my point of view, plus my previous experiences, I know that no one likes to be locked up and not enjoy the joy while is possible to do so. Also, it affects how the affected person would respond to others when they are free because they would have never even touched the real world.

It would have both physical and mental effects. In addition to that, the women shouldn’t be locked up and more they are limited, the more they would be afraid of the world outside and surrounding them. But, even though most women who are locked up in their own house would be afraid of the world outside, in the very inside, there would be a place where they are longing to transform the musty air they breath to fresh. The dull and bitter papaya and coconut juice would then change into sugar and bubbly drinks. All these would be incomplete without some equality in this society and world.

There are places for everyone in this world, but sometimes there are a few people who will never know where they fit. These people are ignored and need places to belong to. For example, Esperanza needs a home of her own because the house she is living in now brings her and her family shame. In the hierarchy of needs, love and caring is one of the parts in it and when the hierarchy is incomplete, there would be problems and disorders. These women who are fighting hard not only for freedom, but also their lives, and they are least likely to succeed when the opposite sex are constantly harassing them and don’t make them feel that they belong. Some strong willed ones would find a way to escape their treacherous would, but that does not work for every abused woman. As a result, the men would give the women so hard of a time to live their lives that they would even fear to even think about escaping their present life. They are why equality must be achieved throughout the world.

All that is done and said, there is only one thing left to do. Words may change people’s thoughts and ideas, but words without action is just like living on a deserted island, no point in doing so. That is why we must bring words and actions together to fight discrimination back to where it came from. Words alone would only give a new idea and would not change the world. Action alone would result in only hurting people. Still, words alone, like Martin Luther King or Caesar Chavez, would succeed, but it would take more time and the “inactive” people would suffer before the world changes. All
that is asked is that ideas of how discriminations should be public so that everyone would know how the majority of the population feels and some or even all would change their ideas about how to treat one another and finally achieve equality. It is all about how in which perspective the ideas are seen. It would take a long and grueling process, but the rewards are always better than what is lost.

Discrimination with "A House on Mango Street". (2016, Jul 01). Retrieved from https://studymoose.com/discrimination-with-a-house-on-mango-street-essay 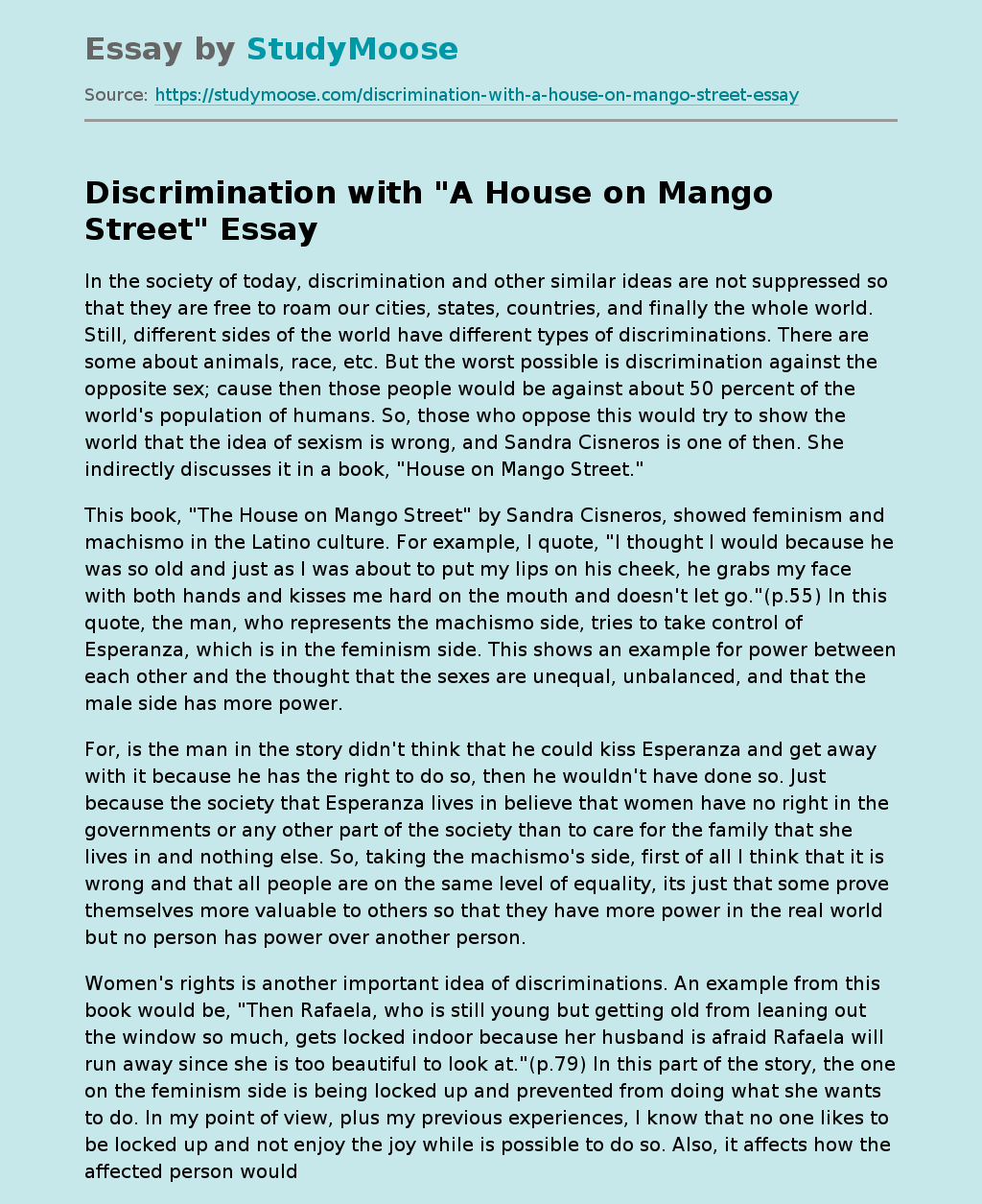