Different countries across Europe and the world have tried to

Different countries across Europe and the world have tried to adopt heterogeneous and non-coordinated reactive measures to cope with the highly transformational automation wave of the 1990s. Among the most discussed proposals five main solutions were identified reviewing studies such as The European House Ambrosetti, Berg,A. et al and Servoz, M. : 1) the introduction of a minimum salary 2) the establishment of a universal basic income (UBI) 3) robot taxation 4) incentives to investments in innovation and in industry 4.0 and 5) enabling education. Among these different responses, the last two seem to be the most reasonable with higher probability of long-term effects on the future structure of labor markets and on the empowerment of current and future generations.

Don't use plagiarized sources. Get your custom essay on
“ Different countries across Europe and the world have tried to ”
Get custom paper
NEW! smart matching with writer

The majority of reports reviewed on the topic indeed concur in advancing solutions 4) and 5) as the most valid and this research is in line with such an opinion. The first three proposals are discussed in what follows to understand their major weaknesses. Firstly, the introduction of a minimum salary, despite providing individuals with greater economic availability and being already widespread across developed economies, doesn’t assist against a technology driven displacement and is consequently unable to bring balance in the future labor market as far as technological unemployment is concerned.

Moving to the so-called universal basic income, this model is still under testing and its effects are still to be assessed . UBI would grant citizens a monetary inflow independent from the profession covered. However, in this way all individuals employed in activities with a social value who do not perceive a salary would be remunerated (housewives, volunteers, caregivers etc.

Turning to the European shortcomings’ analysis and starting with formal education, one major issue is the divide between the general and technical pathways (except for Switzerland and Germany) along with the stigma associated to apprenticeship and Initial Vocational Education and Trainings which are valued as second-rate choices when compared to the university. This results in general schools providing students with general skills and the other way around for technical schools, leaving them unprepared to correctly face an uncertain and flexible environment for which they would need a more comprehensive and tailored background rather than a too generic or too specific one. Another important weakness of current EU-systems most certainly lies in the lack of structured programs for the teaching of soft skills such as problem solving, teamwork and communication. These are indeed deemed to play an increasingly important role as they are too complex for algorithms to internalize and could be a key lever to exploit for human labor to be considered as essential in the long term. Future reforms should be able to initiate a convergence between general and technical education able to equip the future worker to adequately face the labor market with an increased focus on the skillset of the future being linguistical, mathematical, technological and digital literacies along with strong soft skills. Coming to adult education, this presents relevant issues as well. Firstly, it doesn’t take into account the different learning needs of adults as it is often structured

Different countries across Europe and the world have tried to. (2019, Dec 10). Retrieved from https://studymoose.com/different-countries-across-europe-and-the-world-have-tried-to-example-essay 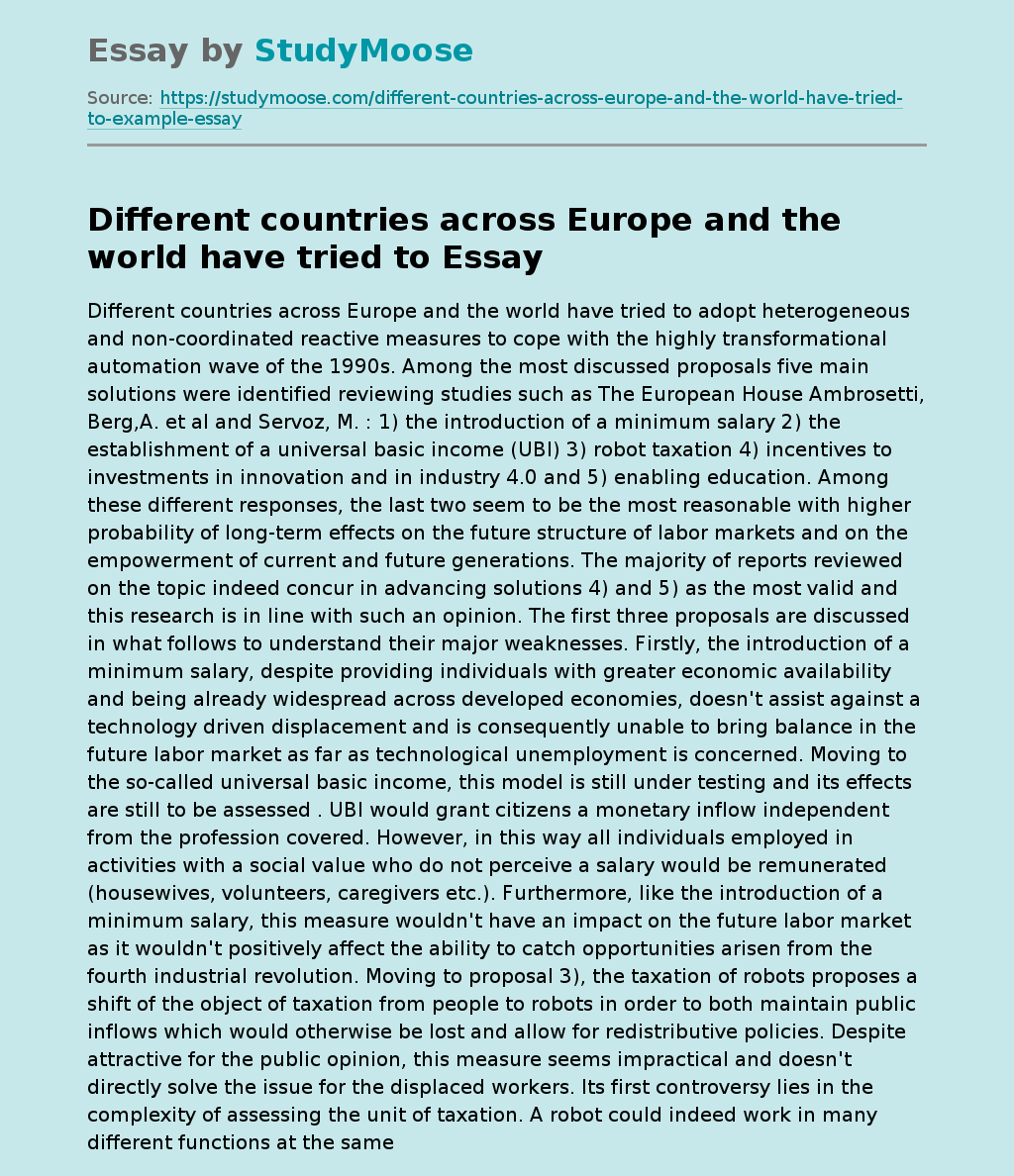