The ancient Olympics were held only throughout Greece, for Greeks; the modern Games are held around the world, for people of every nation.

Turn in your highest-quality paper
Get a qualified writer to help you with
“ Difference Between Ancient Olymoics and Modern Olympics ”
Get high-quality paper
NEW! AI matching with writers

The ancient games allowed only men to compete. Competition was performed almost nude. Wars were put on hold for (and sometimes, even decided by) the ancient Olympic games.

Winners were often awarded expensive prizes, including land and olives (a precious commodity in ancient times).

The modern Games, until recently, had strict requirements about being an amateur. Both men and women compete, though separately. They were canceled during the World Wars. In 1980 (Moscow) and 1984 (Los Angeles), a substantial number of countries boycotted the Games, which in ancient times would have led to out-and-out war.

In addition, the modern Games have a winter sports program; the Winter Games used to be held the same year as the summer edition, but as of the Lillehammer (Norway) Games of 1994, they’ve been shifted by two years to be held on the even-numbered year that falls between the Summer Olympic years.

Besides the ones listed above, there are now winter sports so olympic occur every 2 years, women can compete and watch, there are more sports, multiple venues in a single changing host nation, opening and closing ceremonies, used as political event (boycotting would never be allowed in ancient greece). Some of the new competitions include: bicycling, martathons, swimming events, diving, syncronized swimming, gymnastics like the rings, the bar, povalting, rowing, sailing, white water racing, shooting, soccer, softball, baseball (as of 2008 being the last year), tenis, ping poing, volleyball (beach and court), and many more.

While there are a great many differences between the modern and the ancient Olympics, in terms of which sports are included, what the rules are for those sports, the number of athletes and observers, and other such details, the single greatest difference is that the ancient Olympics were competitions between different Greek athletes, involving no participation by athletes from any other nation, whereas the modern Olympics are a global event in which athletes from all over the world represent their nations. 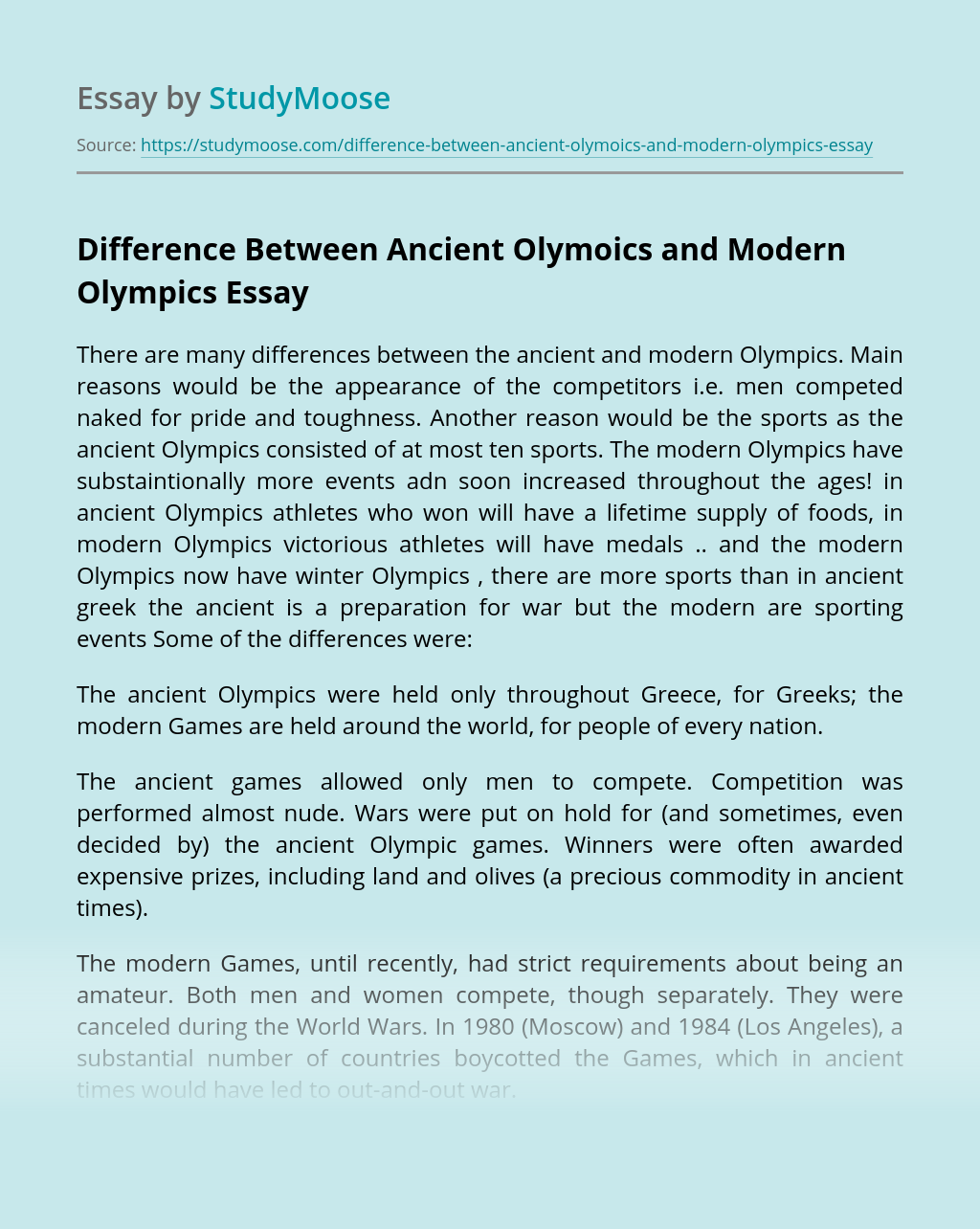 Turn in your highest-quality paper
Get a qualified writer to help you with
“ Difference Between Ancient Olymoics and Modern Olympics ”
Get high-quality paper
Helping students since 2015
Stay Safe, Stay Original