Describe the Type of Memory Loss

1.2 Describe the types of memory impairment commonly experienced by individuals with dementia. Memory problems are usually the most obvious symptom in people with dementia. For example, a person with early stages of dementia might go to the shops and then cannot remember what they wanted. It is also common to misplace objects. As dementia progresses, sometimes memory loss for recent events is severe and the person may appear to be living in the past. They may think of themselves as young and not recognise their true age.

Don't use plagiarized sources. Get your custom essay on
“ Describe the Type of Memory Loss ”
Get custom paper
NEW! smart matching with writer

At first, someone with dementia may appear to be easily irritated or moody. More challenging behaviour may develop in some people over time. For example, in some cases, a person with dementia may become quite disinhibited. This means that he or she may say or do things quite out of character. Some people with dementia can also become agitated or even agressive and this may be directed towards their carers.

They may become suspicious or fearful of others and, in some people, delusions (abnormal beliefs) and hallucinations (a false perception of something that is not really there) can occur.

Alzheimer’s disease- plaques and tangles tend to form in the areas of the brain which are responsible for memory, but as the dementia progresses they start to spread to other brain regions leading to additional problems with thinking, reasoning and language. The most common cognitive symptom of early-stage Alzheimer’s disease is memory dysfunction; an individual may find it difficult to remember recently experienced information.

For example, after a short delay of a couple of minutes an individual may be unable to remember the details of a conversation they have just had. In addition, individuals with Alzheimer’s disease often have problems planning and organising their activities, processing visuospatial information in their environment and recognising family and friends, particularly in the later stages.

Common symptoms of Vascular dementia include difficulties with concentration and communication, memory, symptoms of stroke such as physical weakness or paralysis, periods of acute confusion, and depression. Individuals with Lewy body dementia will often experience vivid visual hallucinations such as seeing animals or people which are not actually present. Periods of fluctuation in performance are also a common characteristic of Lewy Body dementia; tasks which are performed well one day, or at one point in the day, may be performed more poorly the next day, or a few hours later in the same day. Sleep disturbance is often present in this condition; individuals with Lewy Body dementia may experience vivid dreams and night-time restlessness, accompanied by a tendency to fall asleep in the daytime.

Lewy Body dementia shares characteristics of both Parkinson’s disease and Alzheimer’s disease. Like individuals with Alzheimer’s disease, individuals with Lewy body dementia frequently have problems with spatial orientation (i.e., knowing where they are, and navigating in their environment) and memory, although the degree of memory dysfunction is not normally as pronounced. Problems with visuospatial processing and executive functions (i.e., planning and coordinating mentally activities) are prominent features of Lewy Body Dementia. Frontotemporal dementia receives its name from the regions of the brain that are most commonly affected in the condition. Brain degeneration tends to affect the frontal lobes of the brain – which support speaking, planning and controlling behaviour – and the temporal lobes which are responsible for comprehending speech, storing factual information about the world, and memory.

Currently three different forms of Frontotemporal dementia are recognised: (1) Behavioural-variant Frontotemporal dementia (bvFTD) is characterised by personality changes and behavioural disturbances. Some of the most common symptoms include a of loss inhibition (saying or doing things which are socially inappropriate), reduced empathy (problems understanding and responding to the needs of others), problems with planning and organising activities, increased distractibility, changes in food preference (a propensity to eat large quantities of sweet food) and a tendency to develop compulsive rituals (e.g. watching the same movie repeatedly). (2) Progressive non-fluent aphasia (PNFA) is characterised by problems with speech production.

Individuals may struggle to find the correct words when engaging in conversation. Often individuals will struggle to pronounce words correctly (especially if they have more than two syllables), and their speech will lack appropriate grammar. Problems understanding speech can also be present, especially if the sentence contains complex grammar. (3) Semantic dementia is characterised by a selective deficit of semantic memory, which is our memory store for factual information about the world around us – e.g., the knowledge that apples are fruit is a semantic memory. Individuals affected by this condition have difficulty understanding the meaning of written and spoken language, pictures and objects. In some cases of semantic dementia a mild form of the behavioural changes seen in behavioural-variant Frontotemporal dementia may develop as the condition progresses.

Describe the Type of Memory Loss. (2016, Nov 26). Retrieved from https://studymoose.com/describe-the-type-of-memory-loss-essay 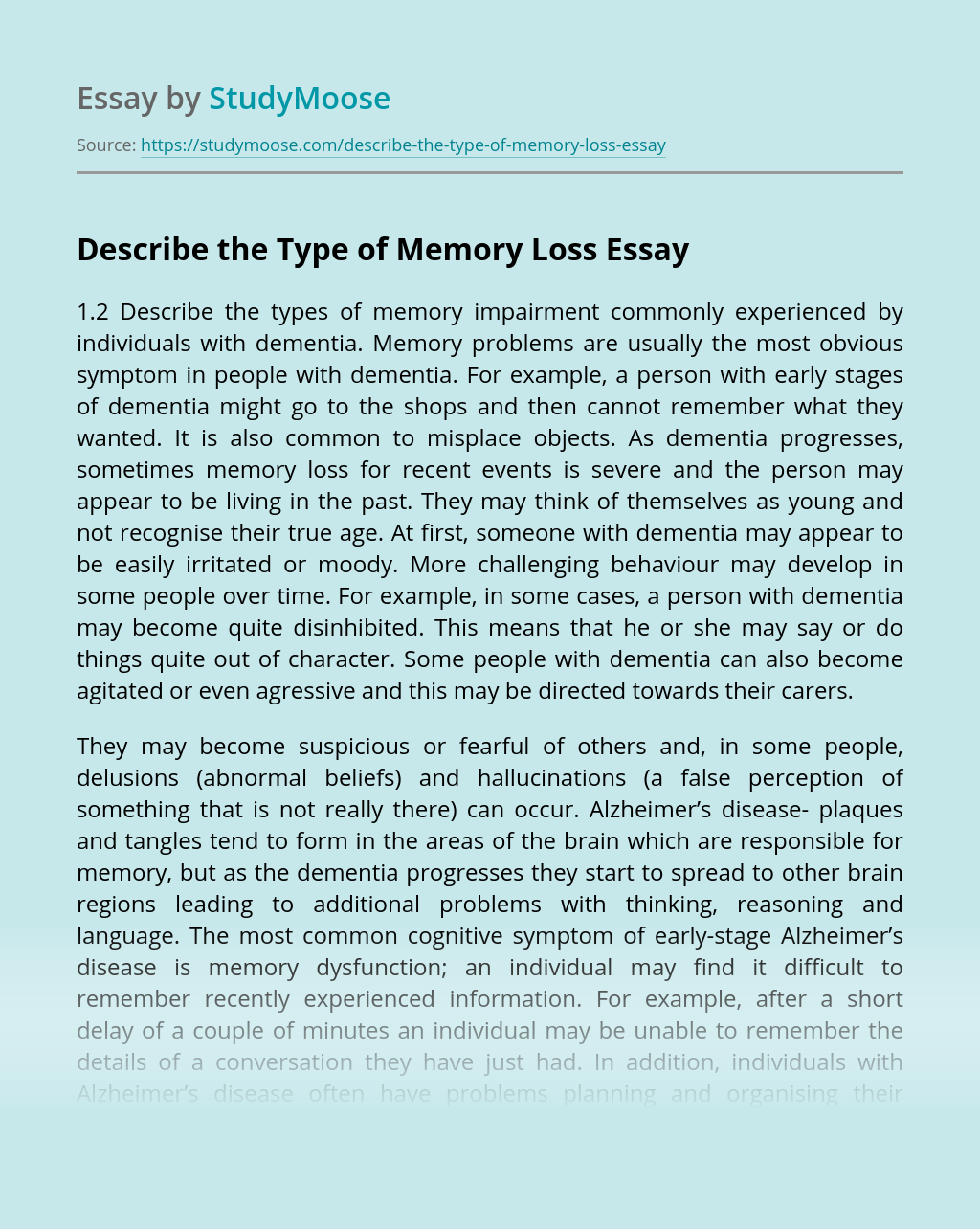