Describe the Advantages and Disadvantages of Referendums

Explain the Benefits and Downsides of using Referendums in the UK? A referendum is a vote provided to the general public which is determined by the federal government, and is used to help answer a crucial political or constitutional concern to which the public need to vote a simple ‘yes’ or ‘no’. One advantage of using referendums in the UK is that they allow the general public that are over 18 to approve or disprove essential constitutional changes. An example of a one being used for this function is the 1998 referendum which was utilized to identify whether Blair and the Labour Party should devolve power to Scotland, Wales, and Northern Ireland.

Devolution in Scotland and Wales was presented in 1998 as the bulk of the general public voted ‘yes’ in regards to wanting more power. In addition the UK federal government secured the permission of the individuals of Northern Ireland for a new devolved assembly in the province in 1998. Arguably, this makes the UK more democratic as the general public have a direct say on the decisions that the government makes and although they are not lawfully binding, they successfully require the federal government and parliament to adhere to the public’s outcome.

This infers that they can help to entrench constitutional change in a system which has an uncodified, flexible constitution and enables the public to shape the path in which Britain is heading. Additionally, as well as including the public on issues which the government make, it also stops the country from being an ‘elective dictatorship’.

This term refers to the idea that once a government gets into power, the public lose their say and ability to express their opinions, enabling the government to make decisions on our behalf instead of consulting with us. This therefore suggests that referendums allow the public to have more power, as there is only a general election every five years. This means that the public vote for a party and are unable to change anything once they are in power. Referendums are used to ensure that the public are happy with the decisions in which the government makes. However, although referendums are important for democracy, referendums could be seen to be too complicated for the public to understand. Not every member of the public will be interested in politics or in fact have a clear understanding of the political system in Britain and this could affect the voter’s outcome. For example, an individual might not understand the significance of their vote to a political question, and that it can have long term effects that they may not take into consideration whilst voting.

Furthering this point, the public may be easily influenced by campaigns of newspapers, notable tabloids, or by wealthy vested interests who can afford to spend large amounts of money on a campaign. This suggests that referendums are not always a true representation of what the public wants an outcome to be. Furthermore, if referendums are held too often, ‘voter fatigue’ could occur. This is another disadvantage associated with holding referendums in the UK as voters may lose interest in politics. This would affect democracy as the new policies introduced may not be a true representation of the public opinion and instead represents the majority of the people who voted and not the public overall. Moreover, even when looking at the people who did vote and the outcome which was achieved, referendums can never truly represent everyone and meet society’s needs as a whole. This is because although a majority of people voted a certain way, there is usually a very slim margin between this and the other outcome which could be achieved. Rousseau and Mill’s argue that referendums represent the ‘Tyranny of the majority’.

This is the idea that minority interests are swamped by the power of the democratic majority. An example of this the Scottish referendum 2014, which saw 55% of the Scottish people vote ‘no’ to independence. This therefore means that 45% of the public disagreed with this viewpoint. This could be seen as undemocratic as only just over half of the voting population’s decision was accounted for. This is a disadvantage as this caused upset among many people in Scotland and the decision did not seem ‘fair’ or an accurate representation of what the people wanted. Also, the government determine when to hold a referendum and could be done to suit their own needs.

The Scottish referendum can be seen to have benefited David Cameron as Gordon Brown promised to give Scotland and its own parliament and powers if they voted no, increasing the pressure on Ed Miliband to come through with those promises. In conclusion, there are various disadvantages and advantages to discuss when looking at referendums in the UK. Referendums are seen as positive as it is the most direct way for the public to participate in politics and know that their opinion and vote matter to the government. Additionally, referendums can be used to educate the public and raise citizens’ awareness of political issues. However, there are also many disadvantages to having referendums as they can cause ‘voter fatigue’ which may result to poor voter turnouts and create a disinterest in politics.

Describe the Advantages and Disadvantages of Referendums. (2016, May 11). Retrieved from http://studymoose.com/describe-the-advantages-and-disadvantages-of-referendums-essay 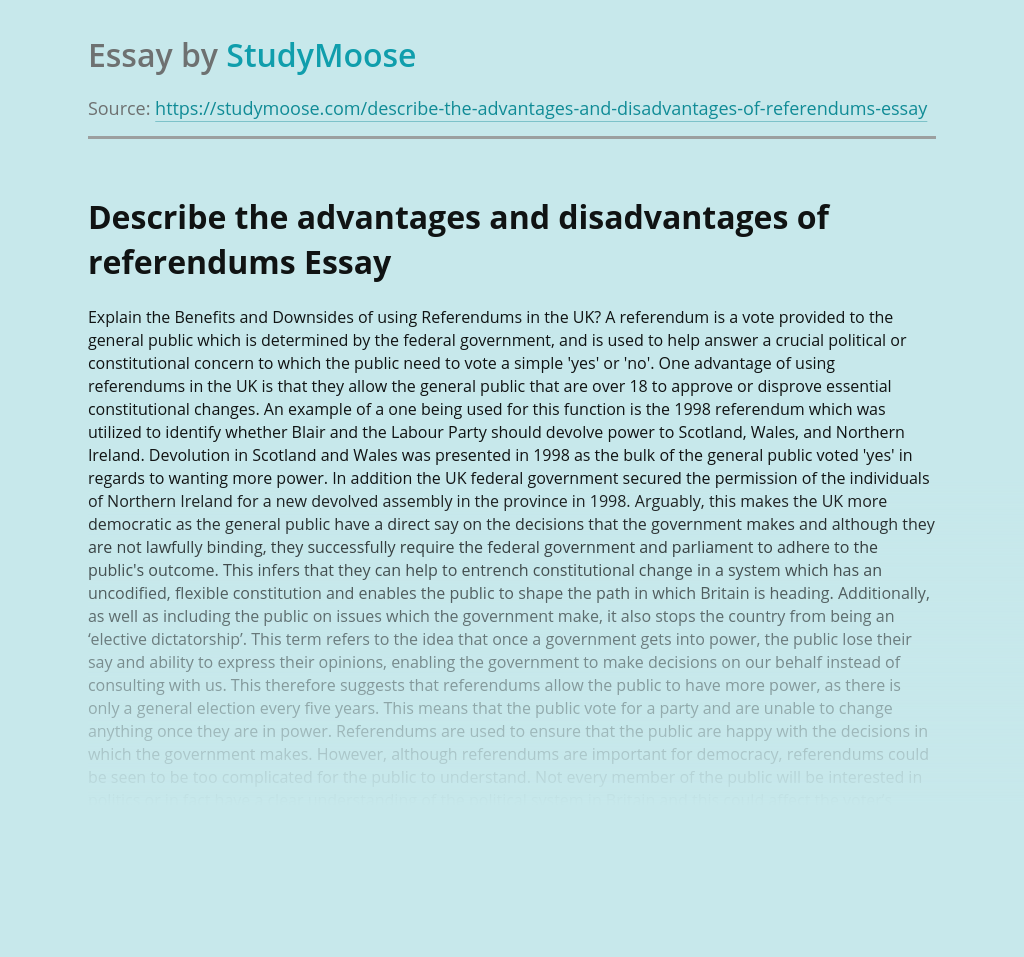 Don’t waste time
Get a verified expert to help you with Describe the Advantages and Disadvantages of Referendums
Hire verified expert
$35.80 for a 2-page paper
Stay Safe, Stay Original